Summary: Distillate quality is measurably improved by replacing the traditional volatile vent with a simple venturi device. The result is a lowering of TDS, raising of pH, and the ability to eliminate VOCs without having to use a carbon filter.

Distillation is an established technique for removing inorganic chemicals from raw water in order to improve its quality. Small, single effect distillers are currently gaining in popularity as a way of processing tap water to produce high quality drinking water. When water is heated, the steam produced can contain vapors of organic chemicals, present in the water, which have significant vapor pressures at the boiling temperature of water. The steam will also contain quantities of carbon dioxide that come from a shift in carbonate/bicarbonate equilibrium caused by the heating process. As the steam condenses and the distillate cools, these vapors and gases re-contaminate the product water.

This is why the water from small distillers is often quite acidic with pH levels of 5.0 or below. This low pH by itself may have a negative effect on taste.

The dissociation that occurs with carbonic acid is sufficient to increase the conductivity of the distillate. In fact the readings made on distillate using a total dissolved solids (TDS) meter are almost entirely due to dissolved carbon dioxide—not ‘dissolved solids’ at all!

This explains the high TDS readings obtained immediately after a batch distiller commences making distillate. This is when the rate of evolution of carbon dioxide is the greatest. It also explains why ‘double distillation’—re-distilling water—results in only a minor lowering of the bulk TDS. In fact, when the distillate starts to appear, the spot TDS can be higher than the bulk TDS of the water placed in the boiling tank! Carbon dioxide totally confuses interpretation of readings made with a TDS meter on distillate.

VOCs
Various techniques have been proposed for removing volatile organic compounds (VOCs) either before or after they have been reabsorbed into the distillate. One approach is to use a granular activated carbon filter to polish the distillate. A second technique is to use an activated carbon filter on the raw water supply so as to remove any organic compounds before the water is heated.

For many years small distillers have been equipped with a “volatile vent” at the beginning of the condenser. This small hole in the condenser tubing has a positive effect in reducing the re-absorption of certain VOCs but is unable to deal with others. Hence, small distillers must be matched with some form of carbon filtration to take care of VOCs. Advocates of volatile vents claim that VOCs present in the steam are “vented” through this small orifice. While this opening may act as a vent for gases evolved while the boiling tank is coming up to the boil, once steam is being produced in volume such gases are blended with the steam and will travel through into the condenser. For whatever reason, volatile vents are partially successful.

The vapors of VOCs behave somewhat differently. They, too, are subject to Henry’s Law, but partial pressures and solubility constants are such that effectively no measurable quantities of such compounds can enter the distillate by this mechanism. How then can they appear mixed with distillate? Unlike carbon dioxide, VOCs are liquids under normal ambient conditions. Under certain conditions, their vapors can condense on the internal condenser surface and then mix with the distillate. It all depends upon actual and saturated vapor pressures.

Each VOC has its own set of vapor pressure characteristics. Vapors of any one VOC can only condense on the surface inside the condenser if its concentration is allowed to build up to where its vapor pressure becomes equal to, or exceeds, its saturated vapor pressure at that temperature.

By stopping the build up inside the condenser of carbon dioxide, and the vapors from VOCs, it should be possible to move the pH closer to normal and eliminate VOCs from the distillate.

Forced condenser ventilation
Keeping concentrations low inside the condenser can be readily achieved by replacing the traditional volatile vent with a simple venturi device as shown in Figure 1. The steam velocity passing into the condenser draws in a small volume of air which travels through the condenser sweeping with it carbon dioxide and organic vapors. These exit the coil and are not reabsorbed. The volume of air required is not large and the venturi creates only a minor increase in back pressure in the boiler. 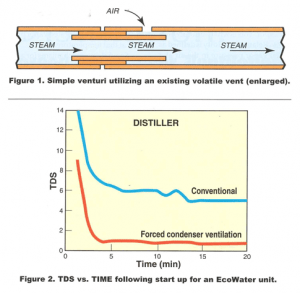 The effectiveness of the venturi device for limiting build up can be readily monitored with a TDS meter. Figure 2 shows how TDS of the distillate varies following start up with an EcoWater distiller with (and without) a venturi.

Monitoring forced condenser ventilation effectiveness at removing VOCs requires sophisticated analytical equipment. Third party testing was carried out using two Pure Water Midi D distillers, one of which had been modified to include a venturi. Granular activated carbon (GAC) post filters were not used. A summary of the results is contained in Table 1.

Chloroform—In order to see what limits might exist, the concentration of Chloroform in the feedwater was increased by a factor of 200. The conventional unit achieved 74.9 percent removal; the unit with forced condenser ventilation achieved 98.7 percent removal.

The results demonstrate the remarkable effectiveness of forced condenser ventilation for eliminating a wide range of VOCs from the distillate.

Conclusion
Distillers that incorporate forced condenser ventilation technology will be capable of reliably producing potable water from feedwater containing all classes of contamination, including volatile organic compounds. Effective VOC removal will no longer be dependent upon the consumer having to remember to change a filter at some specified interval. The distillate produced by this technology will have lower TDS and pH closer to normal.

By not having to allow for a post-filter may prove a plus for future batch counter-top distiller designs, where space is at a premium and is another challenge altogether.

About the author
David G. Palmer, Ph.D., is president of Palmer Technologies Inc. (PTI) based in Lincoln, Neb., a specialist in distillation technology currently seeking patent protection for the approach explained in this article. PTI also manufactures treatment cartridges for eliminating scale problems associated with operating distillers on hard water. Palmer first came to the states in 1985 to work for Pure Water Inc., a manufacturer of small water distillers. He started PTI in 1992. Palmer holds a master’s degree in physics from the University of Otago (N.Z.) and a doctorate in physical chemistry from the University of London. He can be reached at (402) 474-7171 (phone/fax) or email: ptech@inetnebr.com