Can Your Dealership Help Solve the World’s Water Crisis? 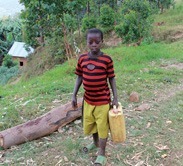 I spent a week in northern Rwanda this past summer. As I watched people going about their daily lives, I saw that so much of their time was devoted to getting water, including that of a young boy trudging to the communal well in the Prefecture of Ruhengeri. The well was where all the people from several kilometers around would walk to fill up their yellow jerry cans with water. (By the way, a five-pound jerry can filled with water weighs about 44 pounds.) Around 40 percent of the world’s population faces water shortages. That includes some two billion without safe drinking water and over 4.5 billion living without proper sanitation. Is there a global solution?

Walking to the well to get water is a daily activity, which could easily take several hours each way. It is an integral, absolutely imperative activity of the day. These villagers have no other source of water for drinking, cooking or bathing. So, they trudge to the communal well, more formally referred to as a water station. Basically, this water station is a roofed brick structure, open at the sides. In the front are three spigots, which people would use to fill their containers with water. This water station was provided and built by the government. I learned from my guide that 20 percent of the cost to visit the mountain gorillas is turned back to the community, mostly for creating infrastructure. These water stations are much better than using the water from local streams.

When I saw children filling up their water cans from the brown stream, I would cringe. I am not saying the water was polluted; it’s just the ground in this area is volcanic soil and very fertile, and must be boiled before drinking. I also saw someone urinating into that same stream a little higher up the hill where kids were filling their buckets.
In today’s world, 663 million people on our planet do not have access to clean, safe drinking water. Every 21 seconds, a child dies from a water-related disease. The job of collecting water tends to fall on women and children between the ages of eight and 13. As a result, women are often unable to get jobs or contribute financially to their households. Children are often unable to go to school to get an education due to the thousands of hours they have to spend annually just hauling water. There are many private initiatives that have been created as a response to the scarcity of water. In this article, I will talk about three: using solar panels to power a well; harvesting fog and installing hand pumps for freshwater wells.

Harnessing solar power
Innovations Africa installs solar, water and irrigation systems in poor villages in Uganda, Malawi, Tanzania, Ethiopia, the Democratic Republic of Congo, South Africa, Senegal and Cameroon. Sivan Yaari, Founder and Chief Executive of an Israeli charity, was drawn to this effort after seeing children during a visit to drought-stricken Africa over 10 years ago. She saw people living in total poverty. Children weren’t able to go to school. Former farmlands were dust due to scarcity of water. There was no hope. “Africa is still in poverty because of the lack of energy,” said Sivan. “And because there is no energy, people are still searching for water, because there is no energy to pump water.” Many children don’t attend school. Lack of food and, more important, water had rendered them “too weak to walk.” People were weak and unhealthy because the water was making them sick.

There is water in Africa in the aquifers. What people need is energy to pump it up. By bringing in and installing solar panels, Innvoation Africa (https://jewishnews.timesofisrael.com/africa-gains-from-israels-solar-system/) was able to not only pump water in a village so villagers did not have to walk for miles to get water, but by adding drip irrigation, they can grow food with it. Said Yaari: “No more famine. Just by bringing them water, we changed the village.” Innovations Africa has installed solar technology in more than 170 African villages. For businesses interested in sponsoring a well in rural Africa, it costs about $25,000 to bring both power and water into a village. 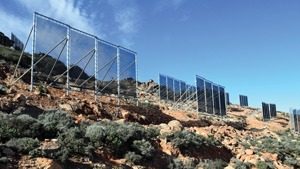 Fog harvesting in Morocco
Scarce water, compromised wells and climate change-induced droughts have destabilized traditional Amazigh communities in Morocco. Rural poor families in Aït Baamrane live in ecologically fragile zones where water is scarce. This region is only 20 miles from the Sahara Desert and it receives just about five and a half inches of rain a year—barely 10 percent of the global average. Women and children devote 3.5 hours daily to the chore of fetching water, which keeps children from attending school.

The lack of rainfall water was a major concern for survival, especially during the dry season, not only for humans but for livestock. People who could, moved to cities; farming stopped and traditional culture suffered. An organization called Dar Si Hmad (http://darsihmad.org/en/) researched the possibility that fog would provide a source of water to support this region. The area boasts an average of 143 foggy days a year in the nearby mountains. At the top of nearby Mount Boutmezguida, Dar Si Hmad has installed 15 honeycomb-shaped nets that have the capability of turning fog into as much as 5,000 of gallons of water a day. This is enough to service all the local villagers, whose average use is just under seven gallons of water a day.
Paris journalist Rebecca Rosman reported on a German technology called Cloudfisher (https://www.aqualonis.com/), a series of nets installed at the top of Mount Boutmezguida that capture fog as it rolls off the Atlantic Ocean. This method can harvest thousands of gallons of water from the sky on foggy days and can withstand winds of up to 75 miles an hour. Droplets condense on the nets, fall into a basin and then through a filtration system before descending through pipes to the surrounding villages. Now, all 1,200 villagers living there have access to safe drinking water. Village traditions are coming back, children are able to attend school, farmers can farm and the area is stable and secure.

The fog harvesting process can only work in certain parts of the world. First, there has to be a mountain range. And second, there needs to be a nearby body of water. This particular area, Ait Bamraane, has both. While fog harvesting isn’t a solution that can work everywhere, similar projects are underway in the mountainous regions of Yemen, Chile, Mexico and South Africa.

Installing hand pumps in El Salvador
El Salvador, with a population of 6.29 million people, is located on the Pacific coast between Guatemala and Honduras and is the smallest and most densely populated country in Central America. The life expectancy is 72 years and the mortality rate of children under age five is 16/1,000. The average annual income (GNI) per capita is $3,580 (USD). El Salvador has the second-highest number of homicides in the world, registering 69.2 violent deaths per 100,000 people. Forty percent of the population is made up of children and 50 percent of the people live in extreme poverty. More than 25 percent of children under the age of five suffer from chronic malnutrition.
The Thirst Project (https://www.thirstproject.org/water-crisis/) is currently working in five countries, including El Salvador. Their goal is to provide access to a clean, safe water supply. This will enable children to go to school, women to have a job and allow farmers to develop sustainable agriculture production for food security. This can break the cycle of poverty. The Thirst Project preferred method of implementing in the field is to build hand-pumped, freshwater wells. After workers install the well, they undertake a program to train community members to maintain and repair these projects themselves for decades to come. According to the people at The Thirst Project, these wells should last 40+ years. For $12,000 (https://www.thirstproject.org/donate/), a dealership can fund a well and change a whole village forever, giving women hope, children good health and the entire community a future.

Impact is a two-way street
We feel good about ourselves when we make an impact helping people. We also know that consumers place tremendous importance on the causes a brand supports. Studies continue to show that Millennials and Baby Boomers prefer to do business with companies because of their ethics and social commitment. This is an opportunity for a dealership to become bigger than themselves by reaching out. Consumers look favorably on those dealerships who are branded as investing in solutions to the world’s water crisis.

About the author
Dale ‘DataDale’ Filhaber is President of Dataman Group Direct, a Florida-based, direct-marketing company founded in 1981. She is an author, lecturer, Listologist and direct-marketing innovator. In the past 35+ years, Filhaber has trained many water quality dealers in direct marketing and lead generation techniques, ranging from direct mail to telemarketing to social media. Her latest book, Lead Generation for Water Quality Dealers–2019 Edition, has received rave reviews and can be purchased on Amazon. Filhaber is also the author of Pure Water Profits, a blog on marketing, focusing on the water treatment industry. She is also a frequent guest lecturer at the annual WQA conference. Filhaber can be reached at (800) 771-3282 or dale@datamangroup.com or visit the website, www.datamangroup.com.

About the company
Dataman Group Direct is proud to showcase WaterProspects.com, https://www.datamangroup.com/water-conditioning, a dedicated website focusing on lead generation and direct marketing for the water quality industry. The company provides direct mail, telemarketing and email lists for the water quality industry. Call (800) 771-3282 for more information or email dale@datamangroup.com.