The Basics of Healthy Swimming 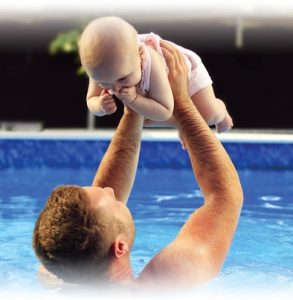 Swimming is one of the most popular recreational activities in the United States, resulting in over 300-million person visits each year. Recreational waterborne infections (RWIs) have steadily increased relative to some microbial agents. Targeted disinfection at the point of use offers essential solutions for improving swimmer safety.

Problem identification—risk
Treated recreational water venues include swimming pools, spas, interactive fountains, wading pools and dive pools. Each configuration has its own challenges in terms of proper maintenance requirements to maximize public health. Potentially harmful microbes may be shed by infected or colonized individuals and spread to other swimmers through shared water contact. Some of the more common microbial hazards include those that infect through the stomach, such as Cryptosporidium, Giardia, Shigella, norovirus and E. coli O157:H7, and respiratory system, such as Legionella and skin, including MRSA and Pseudomonas. Some of the more common diseases related to treated recreational water venues include acute gastrointestinal illness, diarrhea, skin boils and rashes, eye and ear infections, coughing, wheezing, asthma and others. Symptoms have been linked to both microbial and chemical contaminants spread by ingestion, inhalation or simply having contact with water.

Over the last decade, RWIs associated with swimming pools have been at an all-time high. Focused interventions result in better prevention and management of swimming hazards but outbreaks continue to occur. One study estimated unacceptable risks associated with Cryptosporidium in pools, where annual infection risks are estimated at a probability of 2.6 in 10,000 (generally acceptable risks are less than one per 10,000 persons per year). Children are most at risk with an annual infection probability of one in 100.1 These relatively high risks suggest a need for improved pool maintenance and treatment of resistant microbes to reach public health targets.

Outbreaks
RWIs have been formally tracked by the Centers for Disease Control and Prevention (CDC) since 1978. The most recent 2018 report details 493 outbreaks from 2000-2014 in 46 states and Puerto Rico, causing 27,219 cases of illness and eight deaths.2 In about 26 percent of the outbreaks, no causative agent was confirmed but for the remaining outbreaks, 58 percent (n=212) were caused by Cryptosporidium, 16 percent (n=57) by Legionella and 13 percent (n=47) by Pseudomonas. While Cryptosporidium caused the majority of illness (89 percent or 21,766 cases), Legionella caused the most mortality and was responsible for six of the eight associated deaths. More than half (56 percent; n=275) of the outbreaks occurred in the summer months and 32 percent (n=157) occurred at hotel settings.

Although most RWI outbreaks occur in hotel pools and spas, venues associated with the highest level of closures were characterized as child-care pools, followed by hotel/motel and apartment/condominium pools. Interactive fountains and kiddie/wading pools were the most likely to be in violation of state or local pool codes. The smaller amount of water and larger bather-to-water ratio are a challenge for spas and fountains.

Trend analysis provides additional insights into RWIs. For example, from 2000-2006, Cryptosporidium outbreaks increased at a rate of 25 percent per year but then leveled off. Legionella outbreaks, however, continue to increase at a rate of 14 percent per year with the number of cases increasing 286 percent during 2000–2014).2 Reasons for this documented increase are thought to be both increased reporting and awareness and an increasingly aging and immuno-compromised population, as they are more susceptible to these infections.

Pool hygiene
Proper pool hygiene is essential to preventing RWIs. Maintaining water quality can be a difficult task, however, given high bather loads and a host of organic contaminants (i.e., urine, skin cells, sunscreen and natural debris) that increase chlorine demand and reduce residuals to unsafe levels. In 2008, about 12 percent (or 13,532) of routine pool inspections resulted in immediate closure due to the identification of serious public health threats.3 Of these, 12,917 either lacked disinfectant or disinfectant levels were below recommended values. Maximizing disinfectant effectiveness against microbes is dependent not only on adequate disinfectant concentrations but also appropriate pH levels and optimal water circulation and filtration.

Cryptosporidium dominates the list of etiological agents in pools, primarily due to its inherent resistance to chlorine but also because it has a low infectious dose, meaning exposure to only 10 organisms can cause illness, while an infected individual may shed millions of organisms. Even in a well-maintained pool, Crypto can survive for days. Other microbes, like Legionella and Pseudomonas, are susceptible to chlorine but biofilm formation may aid in their persistence. Increased water temperatures, aeration of water, biofilm, scale and sediment all contribute to the growth and persistence of Legionella and Pseudomonas in pools and spas.

Swimmers can help to reduce the spread of RWIs. Persons experiencing symptoms of diarrhea are advised not to swim for two weeks after symptoms have subsided. According to a 2017 survey of 3,114 adults, however, one in four adults would swim within one hour of having diarrhea. Fecal pathogens can be present on our bodies even when we don’t appear to be sick. Thus, showering before swimming is recommended but seldom or never practiced by 52 percent of adults. Unfortunately, swim diapers offer little protection from pre-potty trained toddlers.

Not swallowing water is another control mechanism swimmers have but the fecal-oral transmission route of waterborne microbes is completed given that 60 percent of adults admit to swallowing pool water while swimming. Children have been observed to swallow more than 100 mL of water during each swimming hour.4

Response
Preventing RWIs requires a multi-barrier approach involving bathers and pool operators. The Model Aquatic Health Code (MAHC) was designed to inform both on best practices for healthy swimming.5 Swimmers should shower before swimming and avoid swimming within two weeks of diarrheal illness. Children should be monitored carefully for fecal accidents and taken for frequent bathroom breaks.

Public venues are best operated and maintained by trained staff who adhere to MAHC recommendations. A well-balanced pool typically does not have a strong chemical smell. The smell of chlorine is more likely due to the reaction between chlorine and physical contaminants (urine, feces, sweat, dirt, skin cells, sunscreen, etc.) that produce chloramines. Chloramines can irritate skin, eyes and mucus membranes in the nose and throat as well as cause coughing, wheezing and asthma attacks. Response to finding formed or diarrheal fecal matter in the pool should trigger the following steps:6

Ultraviolet light or ozone systems are added interventions that can effectively inactivate Cryptosporidium and are recommended particularly in venues at increased risk for contamination, such as those frequented by young children.

Conclusions
Assessment of RWIs caused by Cryptosporidium, Legionella and Pseudomonas indicate mixed progress since release of the MAHC. The significant decrease in Pseudomonas and halt in the rise of Cryptosporidium outbreaks suggests the surge in consumer education and standard operator guidelines are having a positive effect. Chlorine-resistant and biofilm-associated pathogens, however, will continue to create challenges in RWI prevention. Continued adaptation of the MAHC among local, state and federal agencies to all treated water venues, along with increased consumer outreach, is needed for sustained benefits.