North America
Registration is now open for the 2019 WQA Mid-Year Leadership Conference, to be held at the Hyatt Regency Hill Country Spa and Resort outside San Antonio, TX, September 9-11. Visit the website (https://events.wqa.org/) to register.

WQA: read municipal reports
WQA recommends homeowners review their municipality’s annual Consumer Confidence Report (CCR), available online or in the mail, to learn important information about their drinking-water quality. US EPA requires community water systems serving more than 25 people or 15 households to issue a CCR every year by July 1. Most CCRs are posted on the water system’s website; residents also can check the US EPA website (https://ofmpub.epa.gov/apex/safewater/f?p=ccr_wyl:102) to find the water-quality report for their community. Those who receive water from a private well are responsible for testing and treatment of their own water supply.

Team Horner: golden years
On Monday, April 15, the Team Horner Group celebrated worldwide in honor of 50 years in business. This was quite the milestone for current CEO, Dr. Bill Kent. Even the city of Fort Lauderdale, FL recognized this wonderful accomplishment by declaring April 15 Dr. Bill Kent and Team Horner Day. It all started back in 1969 with Earl Horner, three employees and one warehouse. (There are now nearly 500 employees in 19 locations and customers in over 110 countries for the integrated manufacturer, wholesale distributor and global exporter of swimming pool equipment and supplies.) In 1972, Kent bought into the company and became sole owner a year later. He sold the company to employees in 2016.

Water recyling program announced
Kemco Systems recently introduced CONSERVE, a program that delivers water recycling as a service to the laundry industry. Built around the company’s understanding of the challenges of running a laundry, the program allows laundry operators to install systems that can recycle up to 90 percent of their water with zero capital investment. 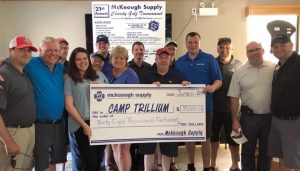 Charity golf tournament a success
In June, McKeough Supply held its 21st Annual Charity Golf Tournament (in honor of Bill Porteous) at Burford Golf Links. The tournament was a tremendous success, with $38,500 being raised in support of Camp Trillium/Rainbow Lake. This donation will enable 39 families affected by childhood cancer to spend a week at camp, having fun being kids. McKeough Supply offered heartfelt thanks to its customers, vendors and teammates for their ongoing support of this event.

Latin America
Aquatech Mexico news
The 4th edition of Aquatech Mexico will be held September 3-5 at the World Trade Centre in Mexico City. Cooperation with the National Association of Water and Sanitation Utilities of Mexico (ANEAS) will strengthen what this international platform has to offer. The event will be co-located with THE GREEN EXPO®. Additionally, the second edition of the Aquatech Latam Awards for new initiatives in responsible and efficient water management are now open for registration.

Asia
India water campaign launched
The newly formed government in India has acknowledged the gravity of the water crisis with the launch of the Jal Shakti Abhiyan, a campaign focusing on rainwater harvesting, water conservation, revival of traditional water bodies, reuse and recharge of water, watershed development and afforestation. Knowledge sharing and community participation have been identified as critical factors for the success of this campaign. Teams have already been constituted in 256 districts; engineers and technical staff have been put in place to take stock of groundwater levels and the state of aquifers and water bodies.

IDE technology deployed in Singapore
IDE Technologies announced it has been awarded the contract to deliver an RO system for the Jurong Island Desalination Plant (JIDP). This plant will be Singapore’s fifth desalination plant and have a capacity of 35.7 million gallons per day (135,000 m3/d). This combined system will produce high-quality water for Singapore. The small city-state has set a target to have desalinated water meet up to 30 percent of the country’s future water needs by 2060.