Changing the Quality of Life with a Quality Water 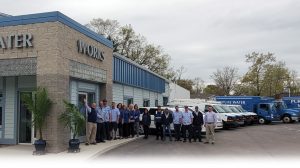 William ‘Bill’ Siegmund completed his college degree in ethnomusicology and set out to both see and hear by traveling around the world. In the mid-1970s he traveled extensively, backpacking from the southern tip of Africa in Cape Town to Alexandria in Egypt. “Back then it was quite an experience,” he said. That’s when he learned firsthand about the challenges of finding potable water. “There was no such thing as bottled water back then.”

After returning to his home state of Michigan, an investor he knew asked him to share his adventures with a group of friends. “I took down 3,000 slides to less than 100 and did the presentation,” Siegmund said. After that, the investor told him, “You’ve done something few people have ever done. You brought something back with you—what is it?” Siegmund had no idea what the man wanted to know. “Give it to me in a word,” the man said. “Not even a page. One word. What did you bring back?” “I thought about it and finally said ‘water.’ He asked what did that mean? And I replied that the four times I nearly died were all from illness related to water. It was such a trouble on the whole trip to find decent drinking water.”

Siegmund explored water-industry opportunities and established Pure Water Works in Traverse City, MI to sell, rent, assemble and service complete lines of water treatment equipment for residential, commercial and industrial use. “People thought I was crazy. I was living in northern Michigan and the illusion is that the water is pristine pure. Yet some of it is the most challenging. You can drill and have the worst water, then drill 100 feet away and have the best water. So Michigan is a real challenge,” he said.

“In 1976 I formed the business concept. In 1978 I established the first sole proprietorship. In 1980 I opened a store, then incorporated in 1984. Today our residential market covers much of northern Michigan. Our bottled water serves the same region. Our commercial-industrial division works the interstate area. Our Ultra Pure division engineers, builds, designs and installs systems throughout the United States, Canada, Mexico and Brazil,” he said. Major clients include optics giant Zeiss who invented anti-reflecting coating.

“That’s one reason German submarines were so deadly. They had anti-reflecting coating on the periscopes, so there was no reflection off the water. That is where that technology started. We do a lot of work for optical laboratories. When the optical industry switched from glass to plastic, the lenses need to be hard-coated for scratch resistance. Anti-reflective coatings protect eyes from harmful rays of sun. We also do Ultra Pure work for other industries, like the Sherman-Williams paint company. Any aerosol can with a latex product in it is 90 percent water that we make for them. We also get involved in a lot of ozone work. We’re in the process of working with a group of people using ozone as an alternative to pesticides for growing grapes.
“I love the water business. It’s fabulous. There’s so much to learn with the exciting technology available today. We have a certified lab that’s part of the business because we deal with a lot of problem water. We learned early on and coined the phrase application technology, which is applying the correct technology to the specific water problem. We combine technology to get the highest purity of water that is available.

“We just finished a very large project in Tijuana, Mexico for a large manufacturing facility. They had two of our systems in that plant, then called and asked ‘can you build three more?’ The first two had been a real challenge. They had to be able to fit in the door of an airplane to fly from Grand Rapids to Tijuana. This took a lot of problem solving. Another time one of our Zeiss people called and said, ‘we have a huge expansion going on with machines made by the Japanese. The Australians and Germans cannot get them to run.’ We looked at water quality and made a proposal for delivery in 19 days. We were shrink-wrapping the equipment when the truck arrived at our warehouse in Traverse City headed for Grand Rapids for a cargo plane. The entire system had to fit into the aircraft doors with a 79-inch overhead.”

Though Pure Water Works has an international clientele, the company has just 15 employees. “One of reasons we are able to do what we do with a small staff is that we have marvelous service techs excellent at building, installing, even manufacturing, and exceptional support staff who’ve been with us a really long time. It frees me up to be out of the office.” And sometimes that means he’s on the water in his sailboat with his granddaughter.

Siegmund founded the company based on his philosophy of changing the quality of life with quality water. This year Pure Water Works began its fourth decade. “We’re still growing every year by a considerable margin and work to keep that growth going forward.” Training is a core foundation of the company’s success. “We train on a continuing basis and share information in a learning experience. Our water treatment specialists are WQA certified. Our installation service crew members are manufacturer trained. An installation service tech will train with a seasoned crew for a minimum of one year.”

At age 68, Siegmund still travels extensively and had just returned from Utile, Honduras when interviewed for this article. “It’s amazing. People always ask: ‘Where are you this time?’” when he participates in teleconferences for the several WQA committees on which he serves. Siegmund is also involved with the Water Quality Research Foundation. His passion for world travel started early. “In the third grade I would spin the globe and run my finger down to see where to go. When I graduated from college, my grandmother gave me some money, which I quickly turned into travelers checks and took off on trips I’d been planning since I was very young.”

Siegmund continues to be challenged by the water treatment business and his role as Managing Director of Pure Water Works. He said: “I’m an industry-born, self-taught person”—who just happens to have a degree in ethnomusicology. “I still have a large collection. I’ve studied music in India and Africa. That remains a love of my life.”