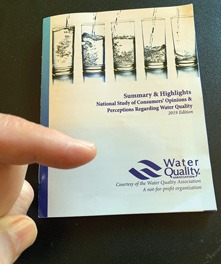 The WQA introduced the findings of its latest national study of consumer opinions and perceptions regarding water quality during the opening session of the April convention in Las Vegas, NV. Americans are clearly concerned about their overall quality of life being affected by the environment. And their concern has grown since the last survey in 2017.

2019 WQA consumer study: Summary and Highlights
The independent survey was conducted by Applied Research-West, Inc. in January. Among the major findings:
• 25 percent of Americans are very concerned about the quality of their household’s water supply and another 26 percent are concerned.
• That’s an increase from the 2017 study, when only 18 percent were concerned, an additional 24 percent were concerned. 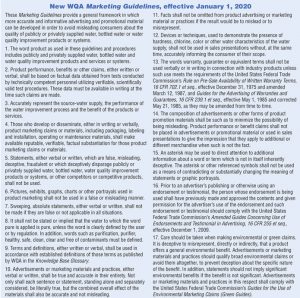 • Concern regarding safety of tap water has grown to 48 percent.
• 80 percent of US households get municipal water, while 12 percent have well water and eight percent don’t know the origin.
• Both users of municipal water (54 percent) and well water (52 percent) are not totally confident that their water supply is safe.

Unaided, almost half of consumers now identify lead as a primary substance of concern.
• 13 percent claim to be very knowledgeable and 43 percent are somewhat knowledgeable of contaminants in their water supply.
• 47 percent identify lead to be of concern, compared with 33 percent in the 2017 report.
• On aided basis, 88 percent are aware that lead and 80 percent that chlorine might be found. Slightly fewer mentioned arsenic (69 percent), radium (56 percent) and pharmaceuticals (56 percent).
• 63 percent purchased some sort of water treatment system when moving into their current home.
• 40 percent bought a POU/EOT product; 37 percent a refrigerator filter, while the remaining purchases were dominated by reverse osmosis (11 percent).

What’s important to consumers when buying a water filtration system.
• Cost, eliminating contaminants and performance (based on taste and appearance)
• A strong product warranty is more important than claims of ‘made in America.’
• Timing: many buy when moving into a new residence or after a boil-water alert.
• Education: learning how to properly evaluate different available products. 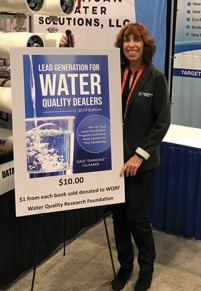 During her presentation to dealers on the trade-show floor, Dale ‘Data Dale’ Filhaber (Dataman Group Direct) commented on how the new study’s findings can help define some key target audiences interested in water-system purchases. “Who are your best prospects?” she asked. Here’s an edited summary of what Filhaber told WQA dealers:

New homeowners. The 2019 WQA Consumer Study reveals that 63 percent who bought a new home in the last year will buy a drinking-water filtration device in the first year. Why do they buy? Because the water in the new home doesn’t taste like the water in their old home! New homeowners are great prospects: they just bought a house; they recently qualified for credit and they’re making an investment in the future of their house. Dealers can purchase new homeowner lists to target this important market.

Families with children and parents with new babies. When it comes to targeting, families with children represent your ‘sweet spot’ today. The new study shows that 51 percent of parents of families with children intend to buy a system. (The 2017 study revealed that 37 percent of water filtration units were purchased for families with children.) Your message to mothers is: you have something that contributes to the health and well-being of your children. Safety. Security. Health. The future. Clean drinking water is the key. Parents need to be in charge of their children’s health.Taking it a little further, parents with new babies need quality water to mix with baby formula. The consumer study says that 52 percent of those surveyed said they are concerned with contaminants in water. Bring the message of water security home to parents of babies.

Healthy lifestyle consumers. The new study indicates that 64 percent who purchase a water filtration system buy to improve their health. Their message is: I care what I put into my body. And your message is: You care about the quality of water customers are drinking or that you care about them! Many healthy lifestyle customers are women. Since 80 percent of household purchases are chosen by the woman, women drive the bus! Remember, you’re not selling nuts and bolts. You’re selling a healthier lifestyle. And that includes drinking plenty of good water that’s good for her hair and for her skin.

Affluent homeowners. Speaking of hair, women hate hard water because it makes hair almost unmanageable. They also hate rust. That’s why, according to the 2019 WQA study, 59 percent buy a water softener for iron problems. People who live in million-dollar homes won’t tolerate hard-water problems like iron and rust. Many are affluent and you should target them if you market in an extreme hard-water area.

Allergy sufferers and older consumers. The WQA study revealed that 10 percent of water softeners are purchased by people with eczema or psoriasis. You might want to market to people with skin problems or kidney issues. Allergy sufferers are also great prospects for selling air as well as water filtration. If you market drinking-water systems in a sunbelt town with lots of retired people in condos and small homes, consider promoting to older consumers who are subject to dehydration.

Millennials. The fastest growing market today, they will be your customers of tomorrow. The study reveals that 56 percent of Millennials are first-time home buyers and 40 percent are parents. In addition, 25 percent of people who use refillable water bottles are Millennial women.
People buy products after boil-water alerts. The new WQA consumer study showed that 48 percent of consumers begin shopping for drinking-water filtration solutions after a boil-water alert. To them, deliver a timely message. 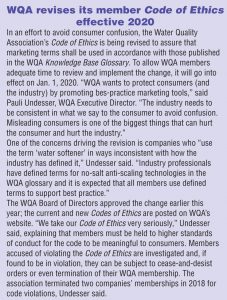 About the 2019 study and dealers
WQA makes available this 12-page, pocket-size booklet that summarizes the results of the 2019 National Study of Consumer Opinions and Perceptions Regarding Water Quality. For more information, go to www.wqa.org. In the April 23 WQA Communications Committee meeting, Beth Allison highlighted ways WQA can help dealers leverage the results of the 2019 study.
• Promote WQA members as water experts: “Based on the 2019 consumer study, the majority of American households either think their drinking water is unsafe or question its safety.” WQA is here to help dealers answer questions, promote on their website and Facebook.
• Address lead concerns.The survey indicates consumers are concerned about lead. The WQA website provides a link to products certified to remove lead.
• Almost half the households are primarily concerned about contaminants and most Americans are somewhat knowledgeable about what contaminants might be found in their water supply.
• Over half of the households impacted by a boil-water alert purchased water filtration systems after the alert; that’s a significant increase over the last study.
• Market to new homeowners. The majority of Americans bought some sort of water treatment system when they bought a new home.
• Taste remains a top reason for installing water filtration. The primary reason for installing any system was to improve the taste of the water and secondarily to remove contaminants.
• Consumers view water treatment dealers and technicians as the water-quality experts in their area.
• Dealers are challenged to find a way to talk to consumers about contaminants without scaring them.

Conclusion
Americans are clearly concerned with contaminants and taste in drinking water. Dealers need to help educate them to make wise purchase decisions. Bringing the latest consumer-study results to the customer will help dealers provide the best data to make those decisions.

About the author
David H. Martin earned his BA Degree in English/psychology from the University of Dayton (Ohio) in 1965. He worked as a copywriter, creative director and advertising account supervisor at three national ad agencies from 1965-1978. Some of the major accounts Martin served include Frigidaire, Whirlpool, GE Appliances, the Hoover Company and Johnson Controls. He was a partner in two regional advertising agencies in Chicago from 1978-84; Owner of Martin Marketing from 1985-1987; Director of Marketing for Hurd Windows Inc. from 1987-1990 and has been President of Lenzi Martin Marketing since 1990. As WC&P Contributing Editor, he has served as a WQA Member and observer on the WQA Marketing Communications Committee since 2016. Martin has received the 2019 WQA Award of Merit. He can be reached at (708) 848-8404 or by email at dmartin@lenzimartin.com