In Chicago, IL, lead in drinking water is more than a public health issue. It is also a political issue and the solutions are both long- and short-term.

An article in the April 2016 issue of Journal AWWA, “National Survey of Lead Line Occurrence,” estimated the number of lead service lines per state. Illinois ranked number one, with more than 700,000 lead water service lines. By comparison, Missouri was number two with 330,000. According to Anne Evens, CEO of Elevate Energy, a Chicago-based non-profit agency that has worked on lead issues in Chicago for several years, “When it comes to childhood blood lead levels, Illinois kids have long had some of the highest rates in the nation. City officials have also consistently resisted calls for a systematic removal of Chicago’s 360,000 lead water service lines that connect homes to water mains and are the primary source of lead in Chicago drinking water.” 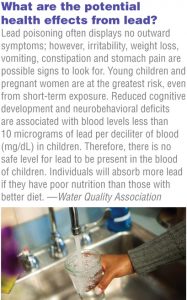 What is the price of decades of political delay?
Exposure of generations of Chicago children to possible permanent neurological damage is well known, according to a 2018 Chicago National Public Radio station report. In Chicago, lead water service pipe was for many decades a sacred cow, protected by the politically connected Chicago plumbers union until 1986, when new installations were finally banned. (Other major cities had enacted bans years earlier and have since begun infrastructure programs to eventually eliminate all lead service pipes in the ground.)

To this day, lead service pipe replacement remains a political football in Chicago. The last three mayors have refused to deal with it, putting politics before public health. (Some people call it ‘The Chicago Way!’) For decades in the Windy City, there has been no political resolve, no definable goals, budgets or deadlines to remediate lead contamination in the public water supply. During the recently completed mayoral election campaign (won by Lori Lightfoot), former Chicago Public Schools chief Paul Vallas accused retiring Mayor Emanuel of inaction on the lead issue. Vallas proposed that the city provide POU water filters and set up a fund to help subsidize in-home filtration, as well as lead service line removal.

More recently, the newly proposed Illinois Senate SB 21460, Lead in Drinking Water would require municipal and private water utilities to plan for the replacement of all service lines in the state. With the city alone facing an estimated lead pipe replacement cost of billions of dollars, this tall task could take many years. (A second bill supports lead testing at Illinois parks.) On April 10, the Illinois Environmental Council led a group of volunteer lobbyists from all over the state to discuss a proposed lead bill with legislators at the state capitol in Springfield on Clean Water Lobby Day. All concerned agree that lead service pipe replacement is the long-term solution.
In a way, water worries over buried lead pipes have been tempered by a continuous coating of protective orthophosphates, added to the water at the city’s two central treatment plants. Some experts say it’s an inadequate program and no substitute for lead pipe replacement. Subsidized, lead-rated POU filters can provide a short-term solution, says the non-profit, which is launching a program for Chicago day-care centers. 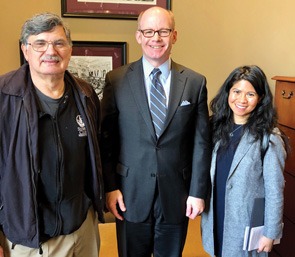 In Illinois, all licensed day-care homes, day-care centers and group day-care homes built on or before January 1, 2000 and serving children under the age of six, must test their water for lead. Children spend a lot of time at child-care facilities and likely drink tap water and eat food prepared with water in these homes or buildings. Testing drinking water for lead helps providers identify potential lead sources and take appropriate action to protect the children in their facilities. If providers find lead at any drinking- or cooking-water source at 2.01 ppb or above, they will need to develop a mitigation plan and ensure children are provided with a safe drinking-water supply until permanent mitigation actions can be developed. Providers can use the water pitchers and sink-mount filters provided through the program as a short-term solution for addressing lead in drinking water.

Lead, violence and incarceration
Chicago children, who grow up with high levels of lead in their blood and live in communities with high rates of violence and incarceration, suffer as adults. That’s according to a new Harvard University study that examines data from Chicago children who grew up in the 1990s. The analysis was published last month in the Proceedings of the National Academy of Sciences. Co-authored by PhD student Robert Manduca and sociologist Robert Sampson, the study aimed to go beyond a more traditional focus on poverty and tease out possible correlations between specific environmental factors and adult outcomes. The researchers refer to the three factors of incarceration, violence and lead exposure as creating “toxic neighborhood environments.” And they found that these factors were associated with disparities between groups in areas of incarceration, more teen pregnancy and lower wages.

About the author
David H. Martin earned his BA Degree in English/psychology from the University of Dayton (Ohio) in 1965. He worked as a copywriter, creative director and advertising account supervisor at three national ad agencies from 1965-1978. Some of the major accounts Martin served include Frigidaire, Whirlpool, GE Appliances, the Hoover Company and Johnson Controls. He was a partner in two regional advertising agencies in Chicago from 1978-84; Owner of Martin Marketing from 1985-1987; Director of Marketing for Hurd Windows Inc. from 1987-1990 and has been President of Lenzi Martin Marketing since 1990. As WC&P Contributing Editor, he has served as a WQA Member and observer on the WQA Marketing Communications Committee since 2016. Martin received the WQA Award of Merit at the 2019 convention in Las Vegas. He can be reached at (708) 848-8404 or by email at dmartin@lenzimartin.com