PFOA and PFAS compounds are global contaminants with reported health effects. With the current state of concern regarding these contaminants, new technologies and direction must be taken to assure human health is not further compromised.

Health effects
These surfactants have been detected in almost every state’s drinking water in the US. Exposure to these chemicals is linked to harmful health effects in liver, kidney, blood, some forms of cancer, increased cholesterol, decreased bilirubin, low birth rate, cardiovascular disease and immune-system disease. These compounds are widely used in households, commercially and are found in non-stick and stain-repellent household products. Additionally, they get into groundwater through firefighting foams, at commercial airports and military bases and operations; over 100 military bases have contaminated groundwater. (New Jersey has taken the lead by setting a drinking water maximum contaminant level [MCL] for these compounds at 13 ppt.)

Manufacturing
Although PFOA and PFAS are no longer manufactured in the US, manufacturing continues in other countries, while other fluoro-organics are manufactured in the US. (These compounds were classified as specialty chemicals when DowDupont sold them to Chemours because they were being treated as commodity chemicals and sold at lower prices.) Smaller PFAs are still manufactured and derivatives of PFOA and PFAS are also being manufactured. These compounds are lumped together in a group called GenX, with over 300 known fluoro-compounds. Smaller fluorine organic compounds are less adsorbed than larger fluoro-organic compounds.

Carbon has a density of about 0.50 grams per cc. It sinks in water because its adsorption spaces fill with water when density becomes more than one g/cc. The idea is still viable, since some modifications may possibly be made to improve the amount of time it is water-floatable. This preliminary experiment has value for PFOA and PFAS because it showed these compounds were not strongly held on present activated carbon and they can be displaced from carbon to allow carbon to sink in water. 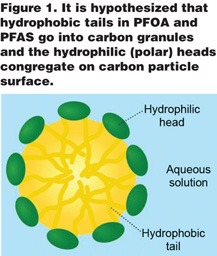 Table 1 demonstrates the relatively poor adsorption of fluoro-naphthalene compared to other halogens bound to naphthalene. This data suggest that a displacement technology can clean used carbons. Fluoro-carbon bonds have the highest ionization potential. Fluorine has highest electronegativity, which inhibits dislocation of outer-shell electrons and subsequent electronic positive and negative on these molecules.

New and improved activated carbon
The main problem being addressed is a new feedstock for activated carbon to get higher loading, loading kinetics and better mass transfer zones on carbon materials when challenged with small fluoro-organics like 1,1,1,-2 Tetrafluoroethane (TFE). Higher carbon loading requires the same size drinking water filters, not the enlargement of filters as proposed by drinking-water facilities in their capital budgets. 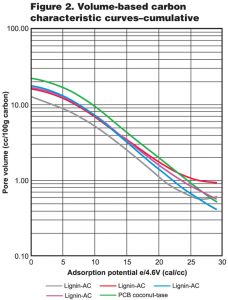 PFOA and PFAS adsorption performance can be provided by challenging the new sorbent and available commercial activated carbons with a small poly-fluorinated compound, TFE. This sorbent out-performs present sorbents by orders of magnitude in high adsorption energy carbon sites. See Figure 2 and summarized table for this comparison with present commercial activated carbons.

Comparison of sorbents
A new sorbent, GG-247A2, outperforms present carbon sorbents in the high adsorption energy (HAE) adsorption spaces 30-25 cal/cc. Carbon with this special HAE has many opportunities to satisfy many environmental problems with capture of PFOA and PFAS, carbon dioxide, methane and other small or water-soluble organics.

Remaining service time
It is important that PFOA and PFAS and other fluorine GenX compound-controlling technology does not have any breakthrough to consumers’ drinking water. The remaining service time test in working activated carbon systems is a comparison of used and unused activated carbon using three ASTM test methods: received and dry apparent density, iodine or butane activities and heat-of-immersion (HOI). When carbon is put in mineral oil, HOI occurs because adsorption is an exothermic process. The amount of heat given off reflects total adsorption spaces unused and available in a carbon sample.

Budget directions of drinking-water facilities
Many drinking-water plants are aware of PFOA and PFAS and other GenX fluorine compounds. Their budget proposals are calling for three years to install larger control technologies using existing technologies: carbon, ion exchange and reverse osmosis. These budgets call for estimated installation costs of $50 million and sorbent replacement of $3 million per year in some places. This problem can be fixed at lower cost by funding new technologies, as presented here. US EPA needs funding to accomplish its mission to protect human health and the environment. The agency is integral to funding new and developing environmental technologies.

About the authors
Henry Nowicki, PhD/MBA is President and Chief Scientist for PACS. He recently accepted The Carbon Hall of Fame Award and will present a one-hour plenary talk, “Review Article of Fluoro-organics in Drinking Water,” at IACC-44. Dr. Nowicki is a toxicologist and risk assessor. Contact by email, Henrypacs@aol.com or phone, (412) 334-0459. Richard Capp, MS, directs software development and new product development at PACS. He is an environmental degreed chemist. Capp is also a certified Microsoft computer expert and has set up a lab-reporting and billing-management program at PACS. Charles Carr is a world recognized expert on thermal heating feedstocks to make activated carbons. He also operates PACS Gravimetric Adsorption Energy Distribution (GAED) activated carbon relative performance equipment. Carr has constructed a small rotary kiln that mimics large commercial kilns for proof-of-concept work to convert feedstocks to new activated carbons. He holds an Activated Carbon Hall of Fame Award. George Nowicki directs and supervises PACS ASTM laboratory and coordinates other projects. He has 26 years of experience at PACS providing services to the carbon industry and has helped to develop the Remaining Services Time (RST) test method for activated carbons. Nowicki also is Safety and Health Director for PACS.