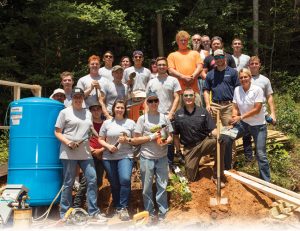 There are many advantages to drawing water from a private well as opposed to a municipal water system, from low utility costs to a naturally filtered water supply that contains beneficial minerals and nutrients that often get removed from public drinking water during the disinfection process. But well owners also shoulder the responsibility for ensuring the quality and safety of the water and water system. Unfortunately, many private well users lack the knowledge and resources needed to routinely monitor and maintain their well water.
Such was the case for homeowners in the Holly Ridge subdivision in Candler, NC. After years of trying to manage the neighborhood well system on their own, residents of the Holly Ridge subdivision acknowledged that the system had fallen into severe disrepair, leaving 24 households (including 45 adults and 18 children) with inadequate pressure, discolored odorous water or no water at all.

When Carol Gibson, head of the Holly Ridge homeowners association, turned to the Water Well Trust (WWT), a non-profit arm of the Water Systems Council (WSC) established to provide wells for low-income Americans who don’t have a safe drinking water supply, for help in January 2018, residents could not use the water to drink or cook. In her communication with the WWT, Gibson said she didn’t even like to bathe in the water because it was dirty and it smelled. Although the Holly Ridge homeowners association had attempted to maintain the neighborhood well systems—originally installed in 1990—limited finances and knowledge thwarted proper upkeep. Homeowners had attempted band-aid solutions over the years, purchasing pumps and tanks from retail stores. But those quickly failed because they weren’t meant to support that many homes and the setup wasn’t done properly. 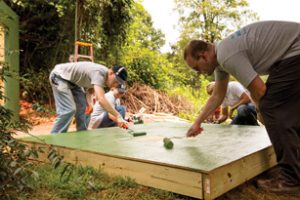 Managing a crisis
In response to Holly Ridge’s water crisis, WWT partnered with a major water treatment equipment manufacturer to develop an effective and lasting solution for the rural neighborhood. Together, WWT and the equipment manufacturer developed a plan that drew on each partner’s experience and resources. The organizations also enlisted help from a local well driller and pump distributor. Because the Holly Ridge neighborhood is located in a remote, hilly area, hooking into the municipal water supply would have been difficult and cost-prohibitive for homeowners. 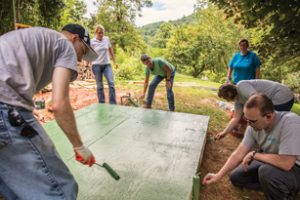 According to Executive Director Margaret Martens, the cost savings to homeowners in rural areas who drill a new well versus hooking up to a municipal water supply is estimated to be as much as 99 percent. The Holly Ridge project cost just over $45,000, $3 million less than the cost of connecting to the municipal system.

Rough terrain impacts water pressure
When water pressure issues proved complicated, the well driller collaborated with a representative from a major pump manufacturer to troubleshoot system issues. Chief among those issues was the neighborhood’s uneven terrain. Due to some rather large elevation changes and given the fact that the wells were already drilled, pumps and equipment that could overcome the head and friction loss needed to be selected.
In June 2018, the well driller removed the existing water well systems, demolished the well houses and installed the new systems. A major pump manufacturer provided all of the materials for the project and supported the WWT with a $1,000 grant through the corporate citizenship program of a major water treatment equipment manufacturer. 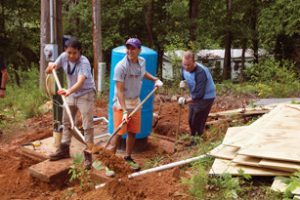 Improving well yield with VFDs
Low well yield, which is typical of the Appalachian region, prompted the decision to install variable frequency drives (VFDs) and large holding tanks. Before the system was replaced, one of the Holly Ridge wells had been drilled nearly 600 feet (182.8 meters) deep, but only produced two gallons (7.57 liters) of water per minute. According to a pump manufacturer representative, Holly Ridge’s previous fixed-speed water-well system had a 20-psi pressure drop between the pump cut-in and cut-out pressure. That combined with undersized pumps resulted in very low water pressure in all 24 residences. (In the new system, the pumps and motors are able to speed up and slow down as needed to maintain a five-psi pressure differential, resulting in higher and more constant pressure for the homeowners, even as demand fluctuates.) 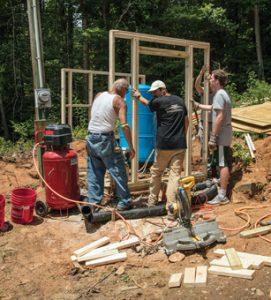 Two wells were outfitted with 18-gpm (68.1 L/m, 2-HP, four-inch (101.6-mm) submersible pumps, VFD controllers and 116-gallon (439.1-meter) holding tanks. A 7-gpm (26.4 L/m), 1.5-HP, four-inch submersible pump and VFD controller was installed on a third well along with a 1,000-gallon (3,785.4-liter) buried potable water storage cistern. Crews also laid down more than 1,000 feet (304.8 meters) of new piping and 2,000 feet (609.6 meters) of new electrical wiring. A local pump distributor coordinated the transport of the donated pumps and controls to the job site. Because higher pressure was required to adequately serve the houses at the higher elevation, there was a need to design a system that incorporated higher pressure-rated components, including a transducer and holding tanks.
The third well required the 1,000-gallon buried potable water storage cistern because the existing well did not have the capacity or recovery to maintain the proper supply during peak usage. According to Preston, the storage tank acts as a buffer so the well can be pumped at a slower and more continual flowrate. 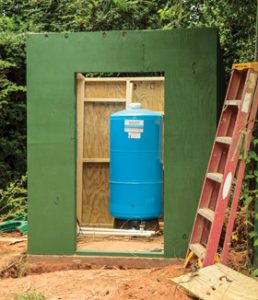 Extending equipment life
Along with consistent water pressure that easily keeps up with household demands, the VFD controllers that were installed are equipped with a dry-well sensitivity setting, which detects dry-well conditions and shuts down the system to prevent damage to the motor and pump. The dry-well sensitivity setting controls the power level at which the VFD controller detects a dry-well fault. More importantly, the dry-well feature shuts the pump and motor down when it detects air being pumped versus water. The feature automatically restarts the VFD controller and monitors if the well has recovered, preventing overheating and wear on the pump and motor.

A joint effort
Following the installation of the new well systems, a group of volunteers from the office of a major water treatment equipment manufacturer in Charlotte, NC joined a local pump distributor and well driller in July 2018 to build three new well houses. The collective commitment and energy throughout the entire Holly Ridge project truly embodied the mission of the equipment manufacturer’s corporate citizenship program. Today, all 24 households in Holly Ridge have access to clean, safe water and residents are grateful to be able to shower, drink water and bathe their children without worry.

About the author
Susan O’Grady is Director of Marketing at Xylem Inc. and has more than 20 years of experience in the residential and agriculture pump market. She consistently works to make a positive impact on the water quality industry through Watermark, Xylem’s corporate citizen program. O’Grady holds degrees from Pepperdine University and the University of Wisconsin-Whitewater. As an active member of the Water Systems Council, she partnered with Water Well Trust Executive Director Margaret Martens to oversee the Holly Ridge water-well project with the help of Xylem’s Goulds Water Technology, Merrill Drilling & Water Resources in Penrose and Hughes Supply in Statesville.

About the company
Xylem (XYL) is a leading global water technology company committed to developing innovative technology solutions for the world’s water challenges. The company’s products and services move, treat, analyze, monitor and return water to the environment in public utility, industrial, residential and commercial building services settings. Xylem also provides a leading portfolio of smart-metering network technologies and advanced infrastructure analytics solutions for water, electric and gas utilities. The company’s more than 16,500 employees bring broad applications expertise with a strong focus on identifying comprehensive, sustainable solutions. Headquartered in Rye Brook, NY with a 2017 revenue of $4.7 billion, Xylem does business in more than 150 countries through a number of market-leading product brands. The name Xylem is derived from classical Greek and is the tissue that transports water in plants, highlighting the engineering efficiency of this water-centric business by linking it with the best water transportation of all: that which occurs in nature. For more information, please visit www.xylem.com.