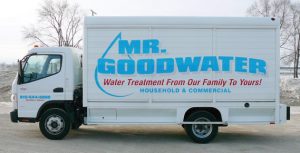 Asevere Midwestern winter is enough to drive anyone indoors and that’s what happened to Butch Rosecke when he worked construction in northern Illinois. “In January 1991, the weather was cold and freezing and our company was off this day because of the weather. My wife, Shelly, was pregnant with our first child and we were already concerned about water quality. She was renting a water cooler and having jugs delivered for our consumption. The water guy arrived to deliver water that same day and mentioned the company he worked for was hiring. It wasn’t long before I was propelled into a career in the water industry.” 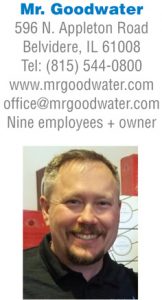 That was 25 years ago. Founded in Belvidere near the Wisconsin border, Mr. Goodwater became a multi-generation family business. Married for more than 30 years to Shelly, a school teacher, Rosecke said, “We have been friends since we were 12 years old. We have two children, one of whom is an active part of the business and our daughter Kassie, currently a senior at Illinois State University.”
The small industrial community along the Kishwaukee River is surrounded by prosperous farms, approximately 75 miles northwest of downtown Chicago and 12 miles east of Rockford. The company’s service area is northern Illinois. Most customers are on well water, including the City of Belvidere. “We have great customers and we are blessed to work with great people. Everyone who works here has been recruited. We hire for character first, then work ethic so we do not have a lot of turnover. If you start with a good crop, you really don’t have any big issues.”

A timeline of successful decisions
“In 1994, I was recruited and accepted a position with a local branch of a national water treatment company,” Rosecke said. “Just two and a half years later, I was offered my own branch in a management position. After 10 years, my employer had significant philosophy changes in customer service, which forced me to leave the company and prepare myself for entrepreneurship. That was in October 2004.
“In February of 2005, I traveled the country seeking the best water treatment products available, including Nebraska, Ohio, Minnesota, Wisconsin and Illinois. These states were the homes of the leading manufacturers of water treatment at the time. Being raised locally in Belvidere, where one of the top manufacturing assembly plants in the United States is located, it was important to me to use American-made products. This process was used to learn the best product, or products, for our specific local water treatment issues.”
On March 1, 2005, Mr. Goodwater was born. Rosecke has since used his knowledge and experience to grow this venture into a well-known and respected business. “We have added more than 15,000 customers since starting Mr. Goodwater. Because no two families are the same, we customize water treatment and drinking water systems to meet individual family needs. A home is unlike any other and water needs can’t be effectively addressed with a run-of-the-mill system. We don’t use common, pre-packaged systems that may not meet specific needs. In fact, most of these ‘off-the-shelf’ systems don’t come close to effectively treating the water conditions in this area. We custom-design and engineer our systems to meet our customer’s individual requirements.” 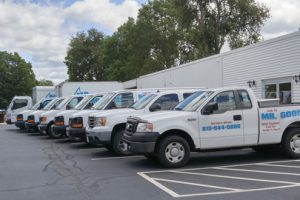 In good times and in bad
By the time the Great Recession hit hard, Rosecke was well established. “I saw other water treatment companies panicking and regressing in their ability to properly service their customers by downsizing and using foreign-made products. I had faith in the water industry, as well as the belief that people still cared about their health and their water consumption needs. So I bought two Illinois companies: a 45-year-old water treatment business that had been servicing Boone and Winnebago counties and a 20-year-old business in Marengo. Replacing aging and sometimes foreign equipment for these new customers became a priority and the Goodwater reputation continued to grow.”
The business is built on relationships, starting with his son Justin, who joined the Goodwater team in 2013 after his tenure at Kiswaukee Community College. “He is currently attending an eight-month program at the Rockford Leadership Academy, through the Rockford Chamber of Commerce for young professional leaders in our area,” Rosecke said. “Mr. Goodwater has always been a family-owned and operated business and having Justin join the group was a natural progression. He used to ride around in the truck with me when he was a youngster. Water was in his blood and Goodwater was the only choice. Today, Justin is our Service Manager, not because he’s my son, but because he has earned that position. He’s phenomenal.” 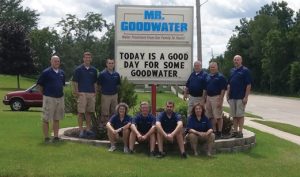 Training the best to be the best
“We have nine full-time employees and I am a working owner. I do service and installs every day, along with many community activities. Through my past involvement with youth programs, community clubs and high-school athletics, my network is extensive and there were a lot of friends with whom to share our services. Mr. Goodwater was even voted Business of the Year by the Byron Area Chamber of Commerce and we’re 22 miles away from there!”
Intensive training is the foundation of Mr. Goodwater’s success. “We do training every Tuesday at 8:30 a.m. No cell phones. No interruptions. It’s a 45-minute meeting with all employees. We talk about service, paper flow, vehicle concerns, any customer issue we had. We talk about safety and driving. We use videos and music. We do a lot of different things to keep it refreshed. And we have more casual lunches with guest speakers: police, driving instructors, healthcare, how to have a positive attitude. Our employees become professional experts.” Many businesses in the industry provide two weeks of training, he said. “We have a minimum of eight weeks for new employees, then they move to half routes before they’re on their own at 10 weeks.
“We have flexible scheduling so the employees can coach athletics or volunteer in our communities and still get paid for 40 hours. Justin works with a program to help kids. I’m crazy involved in coaching athletics. I coached basketball at all levels for the last 25 years and am a board member of the local Belvidere Chamber of Commerce. I also sit on the board for KFACT, a holistic mentoring group for at-risk and under-served teenage girls, and do speaking engagements to promote their cause and raise funds. I currently am sponsoring a freshman in Carbondale, who was homeless in her senior year of high school and has a two-year-old child. She’s so thankful to be in a better place now; she’s in family housing, has a job at school and is in pre-med taking all honors classes while maintaining a 3.65 GPA.”

From then to now
Over the years Mr. Goodwater has grown exponentially with a foundation of caring customer service. “We call it the minimum: the minimum standard. And we set that bar high. For example, send every single customer a thank-you letter: that’s the minimum. We make sure we anticipate our customers’ needs before they call us. We are trying to do the fire prevention and not be firemen.”
In May of 2014, Rosecke said, “Mr. Goodwater continued to emerge as one of the most viable water treatment companies in the Midwest. Russ Piper, long-time friend and owner of American Pure Water, was considering retirement. With 30 years of caring for his customers, he sought me out to take the helm of APW because of Mr. Goodwater’s reputation and experience. Being a healthy competitor and friend, he knew Goodwater would continue to offer the care and excellence he required for his customers. Russ wanted Goodwater to help his customer base into the future. APW was never shopped to any other owners because of the fairness of the arrangement and the knowledge his life-long customers would be properly cared for. That’s pretty amazing.”