To Backwash or Not to Backwash: That is the Question for POE Activated Carbon Systems

You know what you would like to adsorb (chlorine, chloramine, PPCPs, PFOS, etc.) and you’ve picked out your type of carbon (GAC, catalytic, coal, coconut, etc.), your mesh size (12×40), manufacturer’s product (Calgon F400) and even your tank size (10×54). Now one loaded question remains: “Should I install a pressurized upflow, downflow, packed or backwashing type of carbon system?” Let’s explore these options and this question of backwashing in more detail.

The pros and cons to POE carbon anatomy
Upflow
This typical, simple system contains an in/out head, a distribution system and a loaded vessel with gravel and carbon. Water enters the in/out head, through the distribution system, up through the gravel and media, then up through the diffuser screen and into the in/out head and out to the plumbing lines.
Pros: These types of systems are simple and easy to install and they do not require a drain. This upflow service protects the media from fouling, due to suspended solids and fines, and reduces pressure loss. The problem of channeling is also reduced in upflow vessels. The upflow service also protects the system from getting an air lock due to insufficient wetting of the carbon.(1)
Cons: Under higher service flows, leakage of the adsorbate can occur because of low empty bed contact times (EBCTs). In packed or expanded bed systems, carbon fines are produced and can enter the plumbing system if it is insufficiently screened. High service flows will not only disrupt the mass transfer zone (MTZ) but can also disrupt re-stratification if service flows aren’t reduced gradually.(2) A sediment filter is typically needed to filter carbon dust or sediments that make it past the upper diffuser screen. 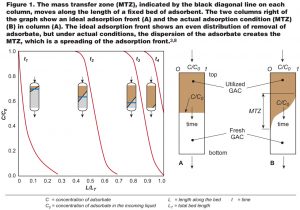 Non-backwashing downflow
Another typical simple system, it contains an in/out head, distribution system and a loaded vessel with gravel and carbon. Water enters the in/out head through the top of the loaded vessel, down through the media and gravel, then up through the distribution system and out to the plumbing lines.
Pros: These types of systems are simple and easy to install and they don’t require a drain. They typically have less leakage of contaminants and higher EBCT, because they do not require freeboard for backwashing. In turn, the tanks can be filled completely to maximize capacity. These systems typically have increased media volume and service flowrate, as long as the reaction zone is less than the packed bed.(3,4) The longer the packed bed zone, then the longer the run time (see Figure 1). The packed bed zone can be conceptually related to the performance of the system. Also, because these systems are typically not homogeneous when loaded, contact time doesn’t play as vital a role as it does with an upflow or backwashing system.(4)
Cons: A major disadvantage of these systems is that without adequate prefiltration the carbon will eventually foul from incoming sediment, biological growth and other fines. This in turn creates compaction with large pressure drops and channeling.(5,6) These systems are susceptible to air pockets, so installers have increased preparation times due to carbon pre-soaking.1 If the incoming water contains trapped air and oxidizing-susceptible contaminants (iron, manganese, etc.), then the carbon can eventually foul. These types of systems should contain an air-vent port to release the trapped air to atmosphere during startup. Additionally, these vent ports can be used to release any additional air after soaking and before final startup.

Backwashing
This type of system includes a self-backwashing control head (time clock or meter initiated), a distribution system and a loaded vessel with gravel and carbon. Water enters through the controller, through the top of the loaded vessel, down through the media and gravel, then up through the distribution system and out to the plumbing lines. Periodically the system is triggered to go through a backwash cycle. In this cycle, water moves through the controller, down through the distribution system, up through the media and then it is discharged to drain. This backwashing cycle is usually followed up with a down-flow settling and/or fast rinse. A quality backwashing-type system will contain both a day override (time clock) and a water meter that triggers the system’s backwash and allows the installer to customize the system to meet their treatment needs. A meter on a backwashing system is important because this helps reduce the potential of early desorption, which can cause a spreading out of the MTZ and can lead to early breakthrough.(7)
Pros: These systems are not susceptible to pressure loss over time or channeling.(1,6) Also, they are not as susceptible to EBCT leakage, suspended-solid fouling and biological growth. These systems are versatile and can be customizable for different kinds of water quality problems. Backwashing can also reduce mud-ball formation, as in upflow systems.(8) These systems also require less preparation time for the contractor and installer by reducing air-pocket problems.(1)
Cons: If engineered incorrectly they have the potential to disrupt the MTZ and have fewer bed volumes of treated water before breakthrough. These systems also waste water to drain, although the drain water can be collected and reused for irrigation or other non-potable water uses. These systems typically have lower EBCT-per-unit volume than packed-bed systems. This is due to the need of freeboard in the tank for expansion during backwash. Larger tanks are needed to equal the EBCT of packed systems. Some systems also require electricity.

A few things to note about backwashing systems
We need to be careful about how we define the term backwashing. There is a difference between backwash and pulsing. The typical maximum bed expansion for backwashing carbon is around 25-30 percent for 20-30 minutes. Pulsing occurs when backwashing a system for short periods of time or bursts (five to six minutes). This pulsing allows the carbon to expand and releases fines and biological growth without redistributing the bed. That means a backwashing carbon vessel with 12×40 mesh won’t redistribute the MTZ. These systems are susceptible to disrupting the MTZ if careful engineering isn’t heeded.(8) For maximum re-stratification, a settling rinse can be added between backwash and fast rinse cycles.(5)
Backwashing systems will reduce overall operational and maintenance capital when compared to non-backwashing systems. Operating costs are decreased due to less frequent carbon replacement from biological and sediment fouling.(5) Also, a backwashing system doesn’t require pre-sediment filtration, so there aren’t additional pieces of equipment needed or the routine costs of changing a sediment cartridge.
Backwashing systems do not effectively reduce carbon capacity. A few of the concerns about backwashing systems are the spreading of the MTZ (due to mixing) and desorption with premature breakthrough for both.(5) If minor mixing does occur, the carbon is not affected because slow desorption occurs on longer time scales than breakthroughs(8) (see Figure 2).

Which method should I choose?
It seems like there are positives and negatives to each type of system. If the concern is free chlorine or chloramine removal, then any system will manage for these applications. If the concern is organics or toxic organics (i.e., PFAS), then one should carefully consider the application. Because of the benefits of backwashing systems, these should be considered even for toxic organic applications if they are properly sized and engineered. Backwashing systems can save the end user maintenance cost on carbon replacement and prefiltration. If a small footprint is required and no drain is available, however, then a downflow system should be considered. Depending on adsorbate, frequent testing and carbon replacement may be required on downflow systems. Upflow systems can only be considered if one has precise control over service flowrates and plumbing systems. In most situations upflow systems do not have enough contact time with the contaminant to be the preferred method.

Conclusion
Different situations, environments and water quality will dictate what type of carbon system needs to be installed. There isn’t a one-size-fits-all kind of approach with activated carbon treatment. One needs to do their homework to make sure they not only have the right size tank, type of carbon for their application, but also know the water quality and if the system should be an upflow, downflow, packed or backwashing vessel. In closing, I’ll leave you with the following question to ponder, should a person backwash or not backwash? Because that is the question.

About the author
Stephen Hamilton currently serves as a regional sales manager at Sterling Water Treatment. He has a Bachelor’s Degree in pre-medicine from Olivet Nazarene University with a background in biology and a minor in chemistry. He has a decade of experience in the water treatment field. He previously served as a factory worker, technical advisor and commercial water treatment specialist for Sterling. In addition to his current role in sales, He also advises in research and development of new products. He also, owns and passionately serves for Living Water Filters, a company that strives to provide life giving water to those in need. He can be reached at SterlingWaterTreatment.com and LivingWaterFilters.com