Arsenic contamination in drinking water has been a recognized problem for decades. In fact, it was one of the first regulated drinking water contaminants. In 1942, the US Public Health Service set an arsenic standard for interstate water carriers at 50 µg/L. In 1975, US EPA regulated arsenic in drinking water as part of the Safe Drinking Water Act, adopting the already recognized 50 µg/L limit. In 2001, the US EPA lowered the arsenic limit from 50 µg/L to 10 µg/L—a federal law that finally became enforceable in 2006. Today, some 40 years later, arsenic remains a primary health concern, particularly for consumers with groundwater sources.

Arsenic health effects
There is no safe or threshold level of arsenic in water. Scientists believe that any level can be hazardous to human health but limits have been set based on what is generally achievable in terms of treating water supplies. Arsenic exists in both organic and inorganic forms. The inorganic form is known to be highly toxic and is also the form typically found in drinking water. Symptoms of acute arsenic poisoning include vomiting, abdominal pain and diarrhea. Symptoms may advance to extremity numbness, cramping and sometimes death. Long-term exposures have been linked to skin, lung and bladder cancer and changes in the skin, including pigmentation changes, skin lesions and the development of hard patches on hands and feet. Cardiovascular disease and diabetes have also been linked to increased arsenic exposures.
When exposure occurs early in life, outcomes may include adverse cognitive effects, including slowed development, intelligence and memory function. In addition, exposures early in life are linked to increased mortality rates in young adults, as evidenced by higher rates of cancer, lung disease, heart attacks and kidney failure.(1)
According to a study by the US Geological Survey’s National Water Information System (NWIS) and others (that characterized 30,000 positive arsenic samples in the US), about half the samples collected from both private and public wells were below concentrations of one µg/L. About 10 percent, however, exceeded the maximum contaminant level of 10 µg/L.(2) Regions in the southwest US reported the highest median and maximum values, particularly Arizona and Nevada.

Millions at risk
Arsenic contamination is widespread globally and has been listed as one of the World Health Organization’s (WHO) top 10 chemicals of major public health concern. More than 140 million people in 50 countries are believed to be drinking water with concentrations above the WHO limit of 10 µg/L.(1) Countries with the greatest groundwater concentrations are Argentina, Bangladesh, Chile, China, India, Mexico and the US. A new study by the US Geological Survey and the Centers for Disease Control and Prevention estimates that 2.1 millon people (out of 44.1 millon well-water consumers) are drinking water with arsenic concentrations above the maximum contaminant level for the US. (Data on arsenic concentrations from over 20 thousand domestic drinking water wells were utilized to map the probability of levels above the 10 µg/L considering geological, geochemical, hydrologic and physical barriers strongly associated with arsenic contamination.(3)) 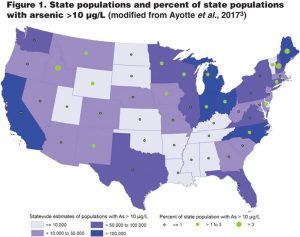 Figure 1 shows estimates of states with the highest probability of arsenic contamination above regulatory limits and the associated populations affected. States with the largest populations drinking from domestic wells with unacceptably high arsenic concentrations include Michigan, Ohio and Indiana. Those with some of the largest percentage of people include Maine (18 percent), New Hampshire (14 percent) and Idaho (11 percent). States with the lowest number of people with high-arsenic wells include North and South Dakota, Rhode Island and Utah.
There are many data gaps in the national survey database of arsenic contamination, where rural areas are largely under-represented. One recent study found disproportionate arsenic exposures in American Indian communities of North and South Dakota, driven by a higher reliance on private well-water supplies in many tribal and rural populations.(4) In this study, 371 households with private water wells in American Indian communities were targeted for arsenic sampling. Arsenic concentrations >10 µg/L limit were found in 97 out of 371 homes (26.1 percent). The percent affected is more than triple the national average of seven percent. While the median concentration was 6.3 µg/L, concentrations ranged from <1 to 198 µg/L.
Groundwater wells with naturally occurring arsenic are not the only source of concern. Trump-era US EPA administration changes led to a 2017 postponement of compliance dates for effluent limits. These limits aimed at reducing arsenic and other waste-dumping into local waterways from coal-fired power plants. Other contaminants from these sources include lead, mercury, selenium, chromium and cadmium, all highly persistent toxicants that can make their way into groundwater supplies. Many are concerned that less regulation on industrial waste disposal will have a long-term, negative impact on drinking water quality.

Minimizing exposures
Private well-water supplies are not regulated by the US EPA and thus it is up to the homeowner to recognize the risk and mitigate the problem. Although the recent USGS/CDC study provides clear evidence of high-risk areas with maps by city, county and state with predictive modeling to estimate high-risk areas of concern, homeowners may still be unaware of risks in their particular region.
Even at the 10 µg/L concentration, the probability of getting lung or bladder cancer may be greater than seven in 1,000. US EPA sets a regulatory goal for waterborne carcinogens to cause no more than one cancer case in 1,000,000. Even supplies that meet the regulatory standard for arsenic in drinking water, however, may still result in an unacceptably high risk of cancer for consumers. (Historically, US EPA considered lowering the arsenic limit to five µg/L but received opposition from the water treatment industry arguing that it would be too expensive to achieve.)
Minimizing arsenic exposures means utilities have to treat, avoid or dilute contaminated groundwater sources. Municipal treatment may involve the use of oxidation, coagulation and precipitation, ion exchange and membrane filtration. Household treatment typically involves distillation, RO and use of adsorptive media, such as iron-based resins and alumina. POU devices are capable of removing up to 99 percent of arsenic from drinking water supplies.(5)

Conclusion
When tested under real-world challenges in the Dakotas study, POU adsorptive media devices were found to be highly effective for arsenic removal. In all instances, concentrations were removed to below one µg/L and remained effective even nine months post-installation. While this study and others focus on reducing arsenic exposures to below the 10 µg/L limit, millions of people are exposed to lower levels that are still deemed harmful. Researchers continue to validate the use of POU devices for arsenic removal. To date, household filtration offers the best alternative for arsenic control for groundwater supplies.

About the author
Dr. Kelly A. Reynolds is a University of Arizona Professor at the College of Public Health; Chair of Community, Environment and Policy; Program Director of Environmental Health Sciences and prior, Director of Environment, Exposure Science and Risk Assessment Center (ESRAC). She holds a Master of Science Degree in public health (MSPH) from the University of South Florida and a doctorate in microbiology from the University of Arizona. Reynolds is WC&P’s Public Health Editor and a former member of the Technical Review Committee. She can be reached via email at reynolds@u.arizona.edu