The protection and enhancement of the quality of groundwater resources is a high-priority environmental concern. Deterioration of groundwater quality may be virtually irreversible and treatment of contaminated groundwater can be expensive. The degree of threat posed by groundwater contamination depends on many factors, including the contaminant concentrations, their toxicity (individually or in combination), the volume of groundwater affected, the uses made of water from the aquifer, the population affected by these uses and the availability of an alternate water supply. Contamination can enter groundwater through many different routes, including downward percolation from the land surface, direct entry of contaminants from the land surface through wells, cross contamination between aquifers in wells open to more than one aquifer, saltwater intrusion, interaction with surface water and interaction with geologic formations that contain naturally occurring contaminants, such as arsenic.

Nitrate and naturally occurring contaminants
Studies suggest that more than 20 percent of both public supply wells(1) and domestic wells(2) in the United States have one or more contaminants that exceed health benchmarks. Although there are considerable concerns about synthetic organic compounds in many locations across the country, nitrate and naturally occurring contaminants (such as arsenic, fluoride and uranium) are the most frequent contaminants exceeding health benchmarks in drinking water wells. Nitrate is particularly prevalent in shallow groundwater in agricultural areas. The vulnerability of aquifers to nitrate contamination depends not only on nutrient sources (field crops, manure spreading and wastewater disposal), but also on groundwater age (time since recharge) and geochemical conditions. Nitrate concentrations are typically higher in younger and well-oxygenated groundwater. 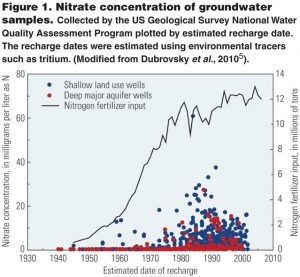 As shown in Figure 1, concentrations of nitrate in groundwater have increased over time, consistent with trends in fertilizer use. The results show how nitrate is slowly moving through groundwater. Nitrate concentrations were elevated in shallow wells as early the 1960s, whereas concentrations in deep aquifers were not elevated until the 1970s. Even if nitrate inputs on the land were drastically reduced today, the effects would not be apparent in many wells and streams for decades because of the slow rate of groundwater movement. This problem is particularly evident in many disadvantaged communities in areas such as California’s San Joaquin Valley that fail to meet drinking water standards for nitrate and naturally occurring contaminants. The only effective solution is to upgrade water treatment, but many of these communities are the least able to afford the extra costs.
US EPA regulates public water supplies to meet drinking water standards, but it does not regulate private wells. Private well owners are on their own for monitoring the quality and maintaining the safety of their wells. About 13 percent of the US population (some 42 million people), rely on private wells for their drinking water. The National Ground Water Association (NGWA) and many states have programs to educate and assist homeowners with private wells. For example, many residents in New England rely on private wells completed in crystalline bedrock, a source of high arsenic concentrations in groundwater (see Figure 2). Environmental and health agencies in New England have raised awareness about the need to test for arsenic but getting people to act has been challenging. Cost, procrastination and ‘optimistic bias’ (a tendency to think one is safer than one’s neighbors) are held out as reasons for the lack of testing.(3) 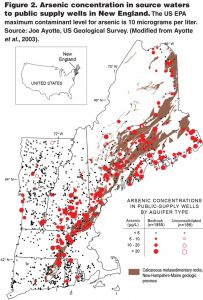 Emerging contaminants
While nitrate and naturally occurring contaminants present long-standing concerns in groundwater, a number of emerging contaminants are proving challenging for protection of groundwater resources. Among these are 1,4-dioxane and per- and polyfluoroalkyl substances (PFAS). 1, 4-dioxane commonly occurs with other chlorinated solvents because it was used as a stabilizer for those compounds. It is a likely human carcinogen and has been found in groundwater at sites throughout the United States. The physical and chemical properties and behavior of 1,4-dioxane create challenges for its characterization and treatment. It does not readily biodegrade in the environment and is among the most mobile contaminants in groundwater. Because it is highly soluble and does not readily sorb to carbon, it requires modifications to existing chlorinated solvent treatment systems.
PFAS are a unique class of emerging groundwater contaminants that have widespread occurrence in groundwater and surface water. They are major components of firefighting foam, waterproof clothing, stain-proofing on carpets and upholstery, fast-food wrappers and many other consumer products. PFAS exposure has been linked to cancer, obesity, thyroid disease, immune system suppression and endocrine system disruption. They are increasingly the focus of environmental protection agencies worldwide. PFAS (like 1,4-dioxane) pose risk to human health and the environment at very low concentration. US EPA has established a health advisory for two PFAS compounds (the sum of PFOA and PFOS) in drinking water at 70 parts per trillion. PFAS present new challenges for those working in the contaminated groundwater industry because of the pervasiveness of items that could affect sample integrity. Teflon-containing equipment, waterproofed field gear, sun blocks and insect repellents are all potential sources of cross-contamination.(4)
A new contaminant pathway was recognized in the 1990s. Vapors from VOC groundwater plumes were discovered to be working their way up through soils and entering homes and businesses through cracks in the foundation and openings for utility lines. Vapor intrusion is yet another of the many ways in which some portion of a contaminant plume finds a preferential pathway to the biosphere. Any number of scenarios is possible. For example, a children’s dance studio could be in the same building as a long-gone and forgotten dry cleaner. The plume might even have been believed to be satisfactorily contained. Closed cases suddenly needed to be reexamined. Vapor intrusion drew new attention in 2011 when US EPA recognized the short-term (i.e., 24-hour) exposure risks to trichloroethylene (TCE) vapor, particularly for women of childbearing age.

Remediation
Many technologies have been applied to remediate groundwater by removing the contaminants or converting them into harmless products. Multiple techniques may be applied over time as the contaminant cleanup evolves. Contaminated fractured rock sites are particularly difficult to remediate. The interconnected network of fractures provides the main pathway for groundwater flow, but diffusion can transfer a significant mass of the contaminant from the fractures into the rock matrix itself, which then becomes a long-term source of groundwater contamination.
Early remediation efforts relied heavily on pump-and-treat, where contaminated groundwater is pumped and treated above ground. The treated water can be re-injected into the same aquifer or discharged to surface water or to the area’s public sewer system. Pump-and-treat is still being used at many sites, but often in conjunction with other approaches. Today, numerous in-situ remediation technologies treat groundwater in place. In-situ bioremediation uses microbes to degrade contaminants within an aquifer, while in-situ chemical oxidation involves injecting chemical amendments to stimulate the oxidation of contaminants. In-situ thermal remediation consists of heating subsurface soil and groundwater to facilitate contaminant destruction and volatilization.
Under the right conditions, the natural system can cleanse itself. While this approach obviously saves money, it needs considerable evidence that it works to gain public acceptance. Monitored natural attenuation (MNA), as this approach is known, relies on non-destructive processes like dispersion, dilution, sorption and volatilization, as well as destructive processes like biodegradation, radioactive decay and chemical or biological stabilization. MNA is commonly combined with active remedies.

About the author
William M. Alley, PhD, is Director of Science and Technology for the National Ground Water Association. Previously, he served as Chief, Office of Groundwater for the US Geological Survey (USGS) for almost two decades. Alley has published over 100 scientific publications and most recently co-authored with his wife, Rosemarie, High and Dry: Meeting the Challenges of the World’s Growing Dependence on Groundwater. He holds a BS Degree in geological engineering from the Colorado School of Mines, an MS Degree from Stanford University and a PhD from Johns Hopkins University.

About the association
The National Ground Water Association is a not-for-profit professional society and trade association for the global groundwater industry. Members around the world include leading public and private-sector groundwater scientists, engineers, water well system professionals, manufacturers and suppliers of groundwater-related products and services. The association’s vision is to be the leading groundwater association advocating for responsible development, management and use of water.