Introduction
Chloramine reduction filters currently on the market are performing very poorly because the carbons used in these filters are being destroyed by the binders when converted to carbon block. The purpose of this article is to warn about the really unpredictable behavior of catalytic carbons with these binders. Users will have to be very careful or they will completely destroy the product during processing. The use of granular carbons is not an option because only powdered carbons demonstrate good catalytic performance and such powdered carbons need to be converted to carbon block. End users are trapped between the need to use powdered carbons and the intense problems of converting these powders into a block without serious damage. There is a single combination of carbon and binder that actually resists all of the damage, but this combination was totally unpredictable and only emerges from a very intense study of the possibilities. 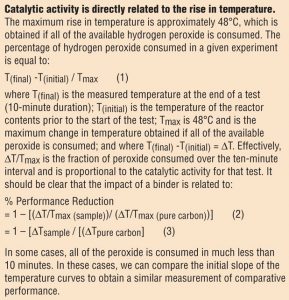 Summary and conclusions
The use of activated carbon to catalytically degrade chloramines and reduce hydrogen sulfide in water has been well established for a century. The catalytic mechanism was established in the 1970s (Bauer, R.C. and Snoeyink, V.L. J. Water Pollution Contr Fed, 45: pp. 2290-2301 (1973). In the 1990s, activated carbons specifically designed to provide enhanced catalytic properties were introduced. It was quickly noticed, however, that a significant portion of their catalytic performance was lost when fabricated into carbon block-based products.

The current study demonstrates that the degradation of catalytic performance in carbon blocks is not a result of heating the carbon, nor related to the conventional surface fouling of the carbon surface. The bulk of the lost performance appears to result from a severe sensitivity to the presence of certain thermoplastic binders and that these losses in performance are unrelated to (but can be far larger than) the measured loss of carbon surface area during carbon block production. 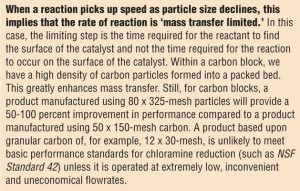 Using a catalytic peroxide degradation reaction as a surrogate for chloramine and hydrogen sulfide reduction, we demonstrate that traditional micro-particulate poly-olefinic (i.e. polyethylene) binders can cause large (60-90 percent) losses of catalytic activity almost regardless of processing temperature. Some polyolefinic binders have less impact than others, but all are a problem when formulated with catalytic carbons. For this reason, chloramine reduction capacity in many carbon blocks cannot come close to a typical filter’s chlorine reduction capabilities, which is based upon a direct and rapid chemical reaction between the activated carbon and free chlorine.

We demonstrate that this problem can be significantly mitigated through the use of ultra-low melt-flow binders (which, when heated, have no significant tendency to melt and flow). Ultra-low melt-flow alone, however, does not protect against a significant loss of performance. For example, a typical 20-percent loading of UHMWPE still reduces performance by about 33 percent. In many cases, the loss of catalytic performance is extremely unpredictable and even an advanced binder such as KYBLOCK® FG-42 pPVDF (which has very low melt-flow and consists of four-micron particles) can seriously collapse the performance of certain carbons. It, when combined with some specific grades of catalytic carbon and used in very specific amounts, however, was found to be the only means to fully preserve catalytic performance.

Summary of methods
The catalytic carbons used in this study were all 80 x 325 mesh carbon with a broad particle-size distribution (15 percent -325 mesh pan) that permitted the production of carbon blocks with enhanced density. Certain tests of fundamental catalytic performance were carried out on a -325 mesh sample of each carbon (as noted below). Samples of each carbon were hand-mixed with varying quantities and types of thermoplastic binders. The binders included Microthene® FE-532 poly(ethylene-vinyl acetate) and FN-510 LDPE, GUR® 2126 ultra-high molecular weight poly(ethylene) (UHMWPE) and KYBLOCK FG-42 poly(vinylene difluoride) (PVDF). 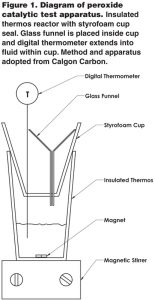 Five grams of each blended sample were loaded into a 30-mL conical porcelain crucible and then compressed by the insertion of a second identical conical crucible to create a thin layer trapped between the crucible surfaces. This sample was then placed into a digital lab convection oven at varying temperatures for 15 minutes. After heat processing, the samples were allowed to cool in the laboratory atmosphere and then gently crushed back into a powder for an assay of catalytic activity.

To measure catalytic activity, researchers assembled the apparatus shown in Figure 1 and used a method that is a derivative of that originally developed by Calgon Carbon (see Haydon, R.A. and Matviya T.M., US Patent 5,470,748). In this case, they used a stainless steel, flat-bottom thermos cup placed onto a magnetic stirrer. The cup was sealed with an insulating styrofoam cup with three perforations. One perforation allowed passage of a glass funnel to admit chemicals into the reactor. The second perforation was for a digital thermometer to be immersed in the fluid within the reactor. The third perforation was used to vent the reactor. 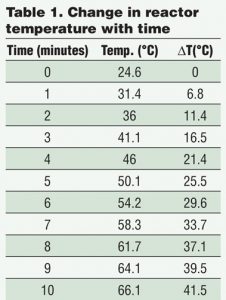 To carry out the test, the researchers first loaded a measured amount of carbon sample. This sample was loaded onto a plastic weigh boat and measured on an analytical balance sensitive to 0.001 gram. It was introduced to the reactor directly (not through the funnel) and a 100-gram quantity of distilled water was loaded into the reactor to disperse the carbon. A 50-gram quantity of buffer solution was then added to the reactor. This buffer consisted of 0.5 M potassium phosphate monobasic and 0.5 M potassium phosphate dibasic. All ingredients were brought to room temperature prior to their use. The contents of the reactor were now allowed to stir (roughly at 600 RPM) for several minutes with the magnetic stir bar and stir speed selected to create a significant vortex within the reactor with the central cone of fluid drawn down approximately 0.5 inch. We confirmed that the initial temperature was stable and that was recorded.

Once the carbon had a few minutes to be wetted by the distilled water and buffer, 50 grams of 30-percent analytical-grade hydrogen peroxide (no stabilizer) was added through the funnel; it had been allowed to equilibrate with room temperature. The researchers immediately started the experimental timer and recorded temperature at one-minute intervals. After a total of 10 minutes, the experiment was stopped. 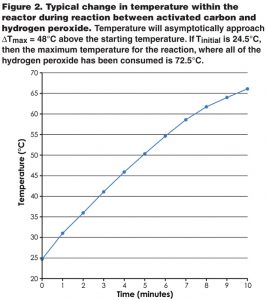 Test results
The researchers tested four catalytic carbons provided by different manufacturers. They called these products: Carbon B, Carbon C, Carbon H and Carbon J. Before going through these tests, however, the researchers looked at some useful fundamentals concerning catalytic carbons. This included: 1) the impact of particle size on catalytic performance, 2) the impact of heating the carbons on performance and 3) the as-received catalytic properties of these carbon samples.

The impact of heating catalytic carbon
When the researchers compared a 0.860-gram sample of Carbon B that had been heated for 15 minutes at 190°C against a sample that had not been heated, the peroxide reduction was 86.5 percent for the heated sample and 87.2 percent for the unheated sample. In effect, there was no significant impact observed from just heating a sample of catalytic carbon and this has been shown to be generally true for all catalytic carbons.
It implies that any collapse in performance when fabricating a catalytic carbon into a carbon block is not related to the simple heating of the sample. Instead, the researchers found that it is a result of a binder interaction with these carbons. The fouling of the catalytic properties of a carbon block can result in as much as a 90-percent loss of catalytic properties, vastly greater than the loss of carbon surface area caused by the presence of that binder. In general, catalytic carbons can seriously interact with a binder to nearly destroy the catalytic properties. This catalytic fouling is unpredictable and varies with binder and the choice of carbon. Direct analytical measurements are required to find a superior formulation.

NOTE: In the future, we will use the value of DT/Tmax as measured for the heated 0.860-gram sample as our baseline for comparing the performance of various carbon-binder blends. In this example, the DT/Tmax value is 0.865. Table 1 and Figure 1 show the results from a typical assay of catalytic performance. The curve shown in Figure 1 is asymptotically approaching a value of approximately 73°C. 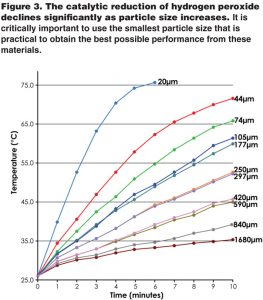 Impact of particle size on catalysis
A sample of Carbon B was subjected to systematic grinding and sieving to obtain narrow particle-size fractions. Each fraction was subjected to a peroxide trial using 1.000 gram of each size fraction. (Figure 3 shows the observed degradation of peroxide as the average particle size of the carbon is varied.) The researchers observed that as particle size declined, the speed of the catalytic reaction increased—and substantially. The smallest fraction of particles was reducing the hydrogen peroxide at nearly eight times the rate of the largest fraction.
Particle size is one of the most important elements of obtaining the best possible performance from a catalytic carbon. When possible, the catalytic carbon within a product should be the smallest particles of carbon within the product, while conventional activated carbon should be the larger size fraction. Catalytic activated carbon is much more expensive than conventional activated carbon and optimizing particle size is the primary means of obtaining the best cost performance of this expensive ingredient.

To utilize very small mesh carbons in a household product, which is the primary means of obtaining enhanced catalytic performance, we usually convert carbon powder into a solid carbon block. As we will see later in this series, however, the conversion of powdered activated carbon into a carbon block can lead to the nearly complete destruction of the catalytic performance. 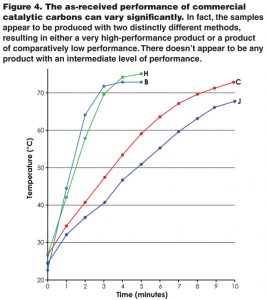 Figure 4 shows the comparative as-received peroxide-reduction performance of the four catalytic carbons of this study. (Each measurement was made using a 1.000 gram sample of -325 mesh material.) There are two distinctly different types of catalytic carbon. Carbons B and H are high-activity materials, while Carbons C and J are much lower-performance materials. The differences are dramatic, with Carbons B and H showing roughly 300-percent better performance than Carbons C and J.

For a user of these carbons in granular form, the enhanced performance of Carbons B and H would permit the use of 60-percent less carbon to achieve the same results as Carbons C and J. For example, a user might create a blend containing 30-40 percent by weight of these high-performance materials with 60-70 percent of a lower-cost non-catalytic carbon to achieve the same result as a product containing 100-percent Carbons C and J.

In conclusion, not all catalytic carbons are alike and products display dramatically varying performance. Our goal is to be able to select a high-performance material and preserve its desirable properties during its conversion into a block.