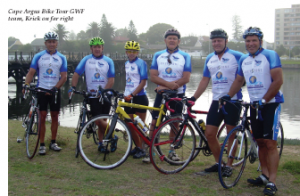 There is a saying in Africa, “Maji ni Uhai,” Swahili for, “Water is Life.” Millions around the world die every year from diseases attributed to dirty water, claiming the lives of an estimated 4,900 children everyday. After seeing the devastation dirty 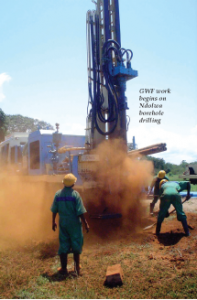 “I was taken by the sense of urgency expressed by world leaders to find solutions to the problem, not only in Africa but also in other parts of the developing world,” Kriek said.

Headquartered in Naples, Fla., with offices in Johannesburg, South Africa and Raleigh, N.C., the GWF has aligned its goals with those established at the United Nations-sponsored Millennium Development Summit in 2000. This summit addressed the need for safeguards to public health, including access to clean water and sanitation for all.

Visiting impoverished schools and communities in southern Africa first prompted Kriek to act. He called on high-profile friends such as Rick French, president and CEO of French | West | Vaughan, a leading U.S. media agency, who was the first to lend support. French took the GWF as the agency’s main pro-bono client and joined Kriek on his trip to Wimbledon to introduce the Foundation to the tennis community.

Uganda 2006
The GWF’s first project, completed in 2006, addressed grave water problems at the 983-student Ndolwa Parents School of Uganda, northeast of the capital. The project was so successful that it quickly expanded outward from the school grounds and today serves the surrounding area of 15,000 with clean water.

“Of all the schools that I visited in Africa, this is one that needed particular attention,” Kriek said. “It was in desperate need of help and with the right tools it was fixed quite easily.”

With more than 150 students per classroom, the Ndolwa School is densely overpopulated and is one of the lowest performing schools in its district. Lake Kyoga is the closest water source, but is more than three miles away and its water is undrinkable. Many students suffer from skin conditions and diseases due to the excessive water pollution and lack of sanitation.

The GWF worked with skilled contractors and members of the community to drill a borehole and install a Mono Pumps Solar Pumping System. This self-contained system stores water in a 2,600 gallon holding tank and is solar-powered, providing maximum water output without relying on fuel that drives up costs. It cost $50,000 to drill the borehole and install the pumping system. 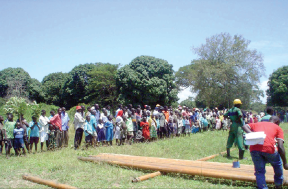 The Ndolwa community looks on as engineers set up the borehole system designed to bring clean water to more than 5,000 in the area

Social marketing for water
The Ugandan project’s success prompted the GWF to expand its marketing efforts and take advantage of so-called ‘new’ media to help promote the GWF and bring awareness to the cause for clean water. The GWF created Web pages on popular online communities such as MySpace and Facebook, where the Foundation invited ‘friends’ to pledge their support. To date, the GWF has more than 700 friends on Myspace including professional athletes, A-list celebrities and many others who care about clean water and sanitation. In addition, the GWF posted video testimonials from Kriek, as well as a PSA (“Africa is Gasping”) on YouTube, Google and Yahoo! Video. In February 2007, the Foundation opened a Virtual Education Center in Second Life, the new 3-D social Web community with more than six million registered users. Visitors to Virtual Education Center can view streaming video and audio, photos of the Foundation’s work in Uganda, and pick up a free t-shirt for their Second Life ‘avatar’. To date, the Virtual Education Center had more than 5,000 visitors interested in learning more about the Global Water Foundation. 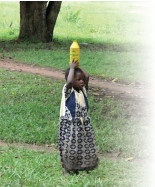 Fundraising is key
The GWF was established as a charitable trust with the express purpose of delivering clean water to the world’s neediest communities. In addition to innovative marketing and awareness campaigns, the GWF also took steps on the ground to raise critical funds to fulfill its obligations.

Cape Town races
As support for the Foundation grew, Johan Kriek along with two professional cyclists competed in the world famous Cape Argus Pick ‘n’ Pay Cycle Tour along the shores of Cape Town, South Africa. Known as the longest timed cycle tour in the world, the Cycle Tour attracted more than 35,000 riders in 2006. Businesses including Korn/Ferry International and Greystone Pharmaceuticals of Ft. Myers, Florida signed on to support Kriek in the grueling 65-mile race. 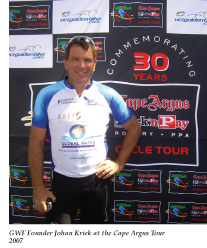 “I rode in this race as a way to bring awareness to what is the next great cause,” said GWF founder Kriek, “For as little as $20, clean water can be provided to one child for a year. With the pledges received from supporters, the amount of help we can provide to those children will change lives.”

GWF and PURRE partner in Sanibel
Kriek didn’t stop there. The following month, he enlisted the help of tennis legends Jimmy Arias, Michael Pernfors, Tom Gullikson, Mitch Hodges and Russ Crutchfield. The pros joined Kriek on Sanibel Island, Florida for an all-day fundraiser on April 14 at the Beachview Golf & Tennis Club to raise money to clean up rivers and estuaries in Collier and Lee County, located in southwest Florida, and support the ‘next great cause’ around the world.

The Seventh Annual day-long fundraising event benefited the GWF and the PURRE Water Coalition, a local clean-water initiative. Kriek and other tennis pros participated in open tennis clinics, a pro/am team competition, and an afternoon celebrity exhibition. The event also included a ‘Walk4Water’ around the scenic Beachview Golf & Tennis Club community. Supporters walked four miles in honor of the average distance African women must walk every day to reach a water source. Walkers were sponsored per mile and helped to raise thousands for the two charities.

World tennis helps Manta
Later that year, the GWF teamed up with the International Tennis Group (ITG) and the Rotary Club of Naples to raise funds for the Foundation’s next major project in Manta, Ecuador. Fundraising events were built around the Association of Tennis Professionals (ATP) “Challenger” tournament, held from April 28 – May 6th at the Naples Tennis Club. Many of today’s tennis stars have battled their way onto the professional circuit through the ATP Challenger Tournaments.

“We are excited to partner with the Global Water Foundation in its next effort to help countless numbers of children and their families,” said Fabricio Valdivieso, Tournament Director for the ATP Challenger series. “The ITG has a long history of giving back to the community and the Manta project will provide clean water to a tremendous number of people in need.”

Recently, a pipeline outside of Manta was destroyed by an El Nino storm, leaving more than 1,700 children and families in the surrounding villages of San Juan, Santa Marianita, San Jose and San Ramon without regular access to clean water. Since pipeline break, these villages receive clean water by truck once every two weeks at best. This pipeline is the GWF’s next project and the Manta Chapter of Rotary International joined the GWF to repair this vital water link. Work began in August (2007).

“These people are in desperate need of help,” said Kriek. “We quickly set out to coordinate fundraising and gather the resources that will bring this project to completion.”

Manta Mayor Jorge Zambrano leads the Potable Water Company (EAPAM) and will spearhead the development and construction of the project funded by the GWF and Rotary Club International. Rotary’s Manta Chapter will supervise the work, which is expected to be completed next month (October 2007).

How to help
The Global Water Foundation encourages readers to visit their website www.globalwaterfoundation.org to learn more about the work of the organization. Individuals or groups who are interested in hosting fundraisers, volunteering for the Foundation, or just receiving additional information are invited to contact the Foundation via email at globalwater@fwv-us.com.