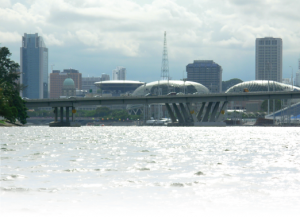 Adensely populated island city-state with 4.5 million people on a land area of about 700 sq. km., Singapore has no natural aquifers or groundwater, which makes water resource management a huge challenge.

Despite these constraints, the population has access to good, clean drinking water. Through integrated water management, PUB (Singapore’s national water agency) has successfully closed the ‘water loop’ and manages the whole water cycle from rainwater collection to the purification and supply of drinking water, to the treatment of used water and its reclamation into NEWater.

This has enabled PUB to put in place a robust and diversified water supply strategy known as the Four National Taps. These are water from local catchment, imported water, reclaimed water (branded NEWater in Singapore) and desalinated water.

With separate networks for drainage and sewerage, rainwater is systematically harnessed from urbanized catch-ments via a comprehensive network of drains, rivers and canals and stored in 14 reservoirs.

One of the first in the world to tap urbanized catchments, about half of Singapore’s total land area is now used as water catchment to harness storm water. This will grow from the current half to two-thirds of the nation’s land surface by 2009, with the completion of various reservoir schemes, including the new Marina Reservoir, Singapore’s 15th reservoir and the first in the city proper.

Being fully sewered allows for all used water to be collected and treated to international standards, before it is channeled for further purification using advanced membrane technologies to produce high-grade reclaimed water called NEWater.

Desalinated water was added to Singapore’s water sources with the opening of the country’s first desalination plant at the end of 2005.

With the Four National Taps in place, PUB has ensured a sustainable water supply for Singapore. Besides diversifying its water sources, PUB has also put in place an overall water demand management program. The efficient management of water demand includes proper handling of the transmission and distribution network to minimize losses and implementation of water conservation measures. Singapore’s unaccounted-for-water was significantly reduced from 11 percent in the 1980s to five percent today, one of the lowest rates in the world.

Moving forward, PUB wants to engage the community to develop a joint stake in water management. Since 2004, the water agency has introduced a series of programs to encourage and demonstrate to the public how they can help to conserve water by incorporating good water practices in their daily lives. Singapore’s per capita consumption of water in households has been moving downwards, from 165 liters a day in 2003 to the current 158 liters a day. The community is also being encouraged to cherish water resources by keeping them clean and to bond with water by enjoying various water activities.

Having ensured a sustainable water supply for the population, PUB plans to turn its network of water assets into a unique feature of Singapore’s landscape.

The agency has rolled out a new long-term program called Active, Beautiful, Clean (ABC) Waters, which will bring Singaporeans even closer to water so they can better appreciate it. This initiative will transform the drains, canals and reservoirs into vibrant streams, rivers and lakes, creating beautiful new spaces for the community’s enjoyment.

Introduced in 2003, NEWater is primarily supplied to non-domestic sectors such as wafer fabrication parks, industrial estates and commercial buildings for industrial and air-cooling purposes. A small percentage of NEWater is also mixed with raw reservoir water before being treated at the waterworks as drinking water.

There are currently four NEWater plants, which can meet 15 percent of Singapore’s water needs; a fifth plant is in the pipeline.

A new chapter
NEWater has opened a new chapter in Singapore’s water history. Traditionally Singapore had relied on rainfall from its own catchments and raw water imported from the neighboring Johor state (Malaysia). These are, however, subject to the vagaries of nature. 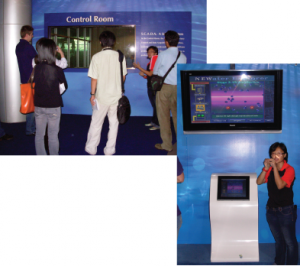 As water is of strategic importance to a nation, there was a need to strengthen the water supply system and make it more robust. In the 1970s, a study was done to determine the feasibility of producing reclaimed water. Though the study concluded that it was technically achievable, there were no plans at that time to take it further because of the high costs of membranes and the technology had not yet been proven reliable.

In 1998, PUB formed a water reclamation study team to test the latest proven membrane technology for water reuse for potable purposes. In 2000, a 10,000 cubic meters per day full-scale demonstration plant was commissioned to undertake extensive full-scale plant studies. It tested the quality of reclaimed water and the technical capability and operational reliability of the membrane technology to produce good quality water from treated used water. The results showed that the reclaimed water (NEWater) is of a consistently high quality and is a viable and sustainable source of supply for Singapore.

NEWater: high quality assurance
To ensure that NEWater is of the highest quality, a comprehensive water sampling and analysis program was implemented and the quality of the NEWater was benchmarked against WHO Drinking Water Guidelines and the United States Environmental Protection Agency (US EPA) Drinking Water Standards. Leading advanced water testing laboratories of local and foreign institutions were engaged to carry out extensive and comprehensive physical, chemical and microbiological tests at various stages of the NEWater production process over a two-year period. Chemical parameters of emerging concerns were also included. In all, about 190 parameters and over 25,000 analyses have been carried out to-date.

An international panel of scientists and specialists comprised of renowned local and foreign experts in engineering, biomedical science, chemistry and water technology was formed to provide independent advice on the water reclamation study and to evaluate the suitability of NEWater as a source of water for potable use. The test results and the plant operation were regularly audited and reviewed by the panel.

The panel concluded that NEWater is consistently of high quality, well within the requirements of the US EPA and WHO standards for drinking water. It is safe as a source of water. The panel also recommended indirect potable use by introducing NEWater into raw water reservoirs. The mixed water then undergoes a process of naturalization before it is further treated in conventional waterworks to produce drinking water.

With the studies confirming that extremely high-quality reclaimed water can be reliably and consistently produced by the NEWater factory, PUB embarked on a program for the large-scale production and supply of NEWater directly to industries and commercial sector users for direct non-potable use. 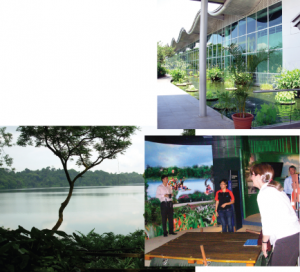 In Singapore, public education on NEWater was carried out in various phases. Prior to the launch of NEWater, extensive briefings were held for various groups such as the community leaders, business communities and other government agencies. The media were also briefed and an educational tour was organized where they visited the US and Europe to see the various places where water reuse had been successfully adopted for many years. A documentary to educate the public on the technology of NEWater and the experience of other countries in the use of reclaimed water was also broadcast on television.

A more sustained public education program followed, with the opening of the NEWater Visitor Centre in early 2003. The pillar of PUB’s public education on NEWater, the Centre offers visitors an enriching and memorable experience; a journey where they can learn about Singapore’s success story in water management in interactive, fun and interesting ways. Apart from understanding the processes of producing NEWater, the Centre also showcases Singa-pore’s long-term plan of securing and maintaining a sustainable supply of water to meet the needs of its people.

More than 500,000 visitors have visited the Centre since its opening. It was named Best Sightseeing/Leisure/Educational Programme at the 2005 Singapore Tourism Awards. The NEWater Visitor Centre also clinched the highly recommended award under the International Water Association (IWA)—Marketing and Communication Award for School Information Programme.

To encourage public sampling, PUB has been distributing bottled NEWater, with more than eight million bottles sampled so far.

Conclusion
The successful development of NEWater has provided Singapore with a sustainable source of water. Together with local catchment water, imported water and desalinated water, these Four National Taps will ensure that Singapore will have water for all uses, now and for generations to come.

About the agency
PUB is a statutory board under the Ministry of the Environment and Water Resources. PUB was named “Water Agency of the Year” at the Global Water Awards in 2006. PUB’s tagline is “Water for All: Conserve, Value, Enjoy”. Learn more by visiting the agency’s website, www.pub.gov.sg