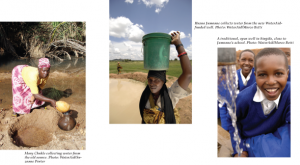 New well allows business to flourish in Nigeria
A mother of five, Mary Chukle has lived in the village of Takkas in the Plateau state of Nigeria for 20 years. Until WaterAid and local partner organization COWAN recently helped the community to build a well, her life was dominated by the daily search for water. “Before we got the well it was very difficult to get water every day. We had to trek down to the river with the children and it took up to two hours. Since the well, life is much better for the women in the village.

“Because of the time I save now from getting water the old way, I am able to work more and I applied for a loan to buy a small village store which I now run. I go to the bigger markets and buy some things like soap and pomade which I sell for a small profit. I buy the soap in large blocks and cut it into smaller pieces.

I also sell salt and sugar and soft drinks and bread and other dry goods. On Wednesdays I also sell some of my goods at the local Takkas market. None of this would have been possible if I was still spending two hours every day collecting water.

I still owe a little on the loan but I am confident I will pay it back soon. The extra money we make from the shop and my sales in the market is spent on school fees and managing the home. Life is still not easy, but it is better.”

Every morning, Cabita Neupane, a mother of four daughters, would rouse herself at 4 a.m., long before dawn. She would pull her clothes on and venture out into the darkness to start the first of several arduous treks up a mountain, over uneven, rocky ground, to a spring where she would collect water in a metal jug for her family. She would return home two hours later, only to face the same return trip two, three or four more times the same day. A good day would mean spending six hours collecting water, a bad day meant 10.

Despite her long journeys, she could never be sure that the water she had worked so hard to fetch was safe for her family to drink, as it had come from an open source that could easily become contaminated. Stomach aches, fever and diarrhea were all common occurrences in her family.

Unfortunately, it is the daily reality in the 21st century in the village of Neupane Gaun in the foothills of the Himalayas in Nepal. Fortunately, Neupane’s ordeal is now over. In partnership with local organization NEWAH, WaterAid has helped her community to build a gravity flow water system fitted with tapstands, so that clean, safe water is now piped close to her home.

Neupane is one of the million people that WaterAid enables to gain access to safe water every year. Working in partnership with local organizations in 17 of the world’s poorest countries, WaterAid helps communities set up and manage practical and sustainable projects that meet their real needs.

The agency is currently working toward growth so that more people can be helped each year. However, given the scale of the problem, no one entity can do it alone. At the beginning of the 21st century it’s a shocking reality that 1.1 billion people (a sixth of the world’s population) live without safe water and face daily struggles like the Neupane family.

With such huge numbers living without life’s most basic need, it’s vital that we also hold the international community to account for the promises they have made to rectify this situation. In the year 2000, world governments pledged this century would be different. They signed up to the UN’s Millennium Development Goals (MDGs) to halve extreme poverty by 2015. Within this framework, a target was agreed: to halve the proportions of people living without access to safe water and sanitation by this date.

It’s crucial that world governments recognize the important roles water and sanitation play in development and start reflecting this better within their aid budgets. In 2006, US official aid for non-emergency drinking water projects totaled $116 million—just one percent of the total $9.2 billion budget for the US Agency for International Development. However, unless communities have access to safe water, other development initiatives are unlikely to succeed. While US investments in health and education overseas are increasing, the lack of safe water is recognized as severely limiting the potential impact of this funding. 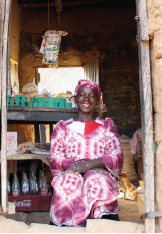 Even today, in 2007, 5,000 children die every day from water-related diseases, making this the second largest cause of infant deaths worldwide after acute respiratory illnesses. Meeting the MDG targets for water and sanitation could avert 470,000 deaths and free up many of the developing world’s hospital beds, half of which are occupied by people suffering from water-related diseases.

Education, especially of girls, also suffers acutely in areas where there is no safe water. Hours of water collection and the incidences of water-related diseases mean children have no time to attend school or are not well enough to attend. Even teachers are reluctant to work in schools without lavatories or water.

Furthermore, economic development is being held back by a lack of water and sanitation, trapping communities in poverty. Poor families are paying money they can ill afford for the treatment of water-related diseases and women are being kept out of productive work by long hours of water collection or care for family members sick with water-related diseases. If the MDG targets for water and sanitation were met, an extra 320 million productive working days would be freed up every year. This would put more money in the pockets of poor families, meaning they would have more money for food, school fees and other essentials.

It is clear to impoverished people that safe water is an absolute essential if they are to have any chance of improving their lives—as the latest Pew Global Attitudes Project opinion poll reconfirmed. It’s important that international governments respond to these calls for help and step up their efforts to attain the MDG targets, so that more people can take the first steps in escaping the cycle of poverty, just as Cabita Neupane from Nepal did when she gained access to safe water. “Now we are healthy, there are less illnesses and we get sick less often. Before, I couldn’t feed my children on time. Now I can cook and feed my children properly and can pay attention to my children’s personal needs. I feel relaxed now and have a sense of easiness. We can even do kitchen gardening and can grow vegetables now. It was so difficult to get drinking water that we couldn’t imagine growing vegetables before, but now we have healthy vegetables here too and I don’t have to worry about the steep slope,” she said. 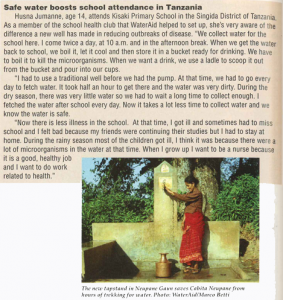 At a time when the efficacy of many programs in the developing world is hotly debated, WaterAid’s programs have been shown to dramatically reduce disease, improve livelihoods and foster greater opportunity for girls and women.

About the author
Patricia Dandonoli is the President and Chief Executive Officer of WaterAid America. Contact her via email at pdandonolil@wateraidamerica.org