The Dow Chemical Company announced an across-the-board price increase for acrylates in all regions, effective October 1 or as otherwise allowed by individual contract terms, in addition to an increase that went into effect August 1. Off-schedule prices for butyl acrylate, 2-ethylhexyl acrylate, ethyl acrylate, methyl acrylate and glacial acrylic acid increased in North America, US$0.03 per pound; Asia, Middle East/Africa and Latin America, US$70 per metric ton and  €50 per metric ton in Europe. 💧

The American Water Works Association has announced its partnership with Forrest T. Jones & Company of Kansas City, Mo. The firm will be the official administrator of the organization’s life and health insurance plans. A variety of insurance plans, including comprehensive health, ID theft assist, Liberty Mutual home and auto insurance and Long-Term Care Evaluation Service will be available through this partnership. 💧

Golf tourney reminder
The Leveredge/ISPC Annual Golf Tourney will take place at the Mystic Dunes Golf Resort, just west of Walt Disney World in Orlando, Fla. on November 9, beginning at noon. The format will be a shotgun start best-ball scramble with four-player teams. Prizes include a seven-day Caribbean cruise for two, a set of Callaway® Big Bertha Irons and roundtrip domestic airline tickets for two. A BBQ-style buffet and raffle will be held after the tournament. More than $8,000 worth of prizes, including a 42” high definition TV will be given away.

Syrenius and T-DRILL celebrate
T-DRILL Industries, a 30-year-old manufacturer of tube and pipe fabrications, proclaimed 2007 as the 20th anniversary of its current ownership. The first 10 years saw several owners and marginal growth. Under the leadership of Osmo Syrenius, the firm has continued to grow and expand its product line. T-DRILL has two modern manufacturing facilities in Finland in addition to one in Atlanta, Ga. The company’s signature line of machines has been supplemented with manufactured machines used for cutting, spinning, flanging, end forming and deburring tubes. All are sold worldwide. 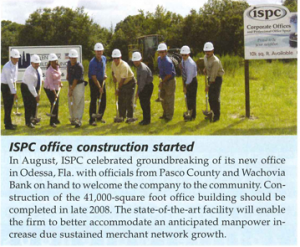 Additions to IBWA convention schedule
The International Bottled Water Association (IBWA) has added an Environmental Issues Panel to the Convention General Session, as well as an educational session to give attendees a clear sense of the current media landscape and tactics that may be used to deliver positive bottled water messages. The panel will feature expert speakers on a variety of key issues that have risen to the top of the public agenda over the past several months and provide useful ideas that companies can implement in their own businesses. Assertive Media Tactics: Turning Up the Volume on Bottled Water Communications will be presented by Dan Gainor, Director of The Business and Media Institute. He will elaborate on the media environment that gave rise to the attacks on bottled water and provide attendees with an overview of some tools businesses can use to better defend themselves. This will include how reporters, editors and producers go about gathering and packaging news and how companies in the bottled water industry can get their story heard above the din.

WorldWater & Solar news
WorldWater & Solar Technologies Corp. moved its corporate headquarters to a larger facility in October, located at 200 Ludlow Drive, Ewing, NJ 08638. Telephone (609) 818-0700 and fax number (609) 818-0720 remain unchanged. The company also announced an agreement with Prime Solar Senergy, S.L. (Prime) of Barcelona and Madrid to be WorldWater’s exclusive representative in Spain. Prime will act as a marketing and logistics partner to acquire and fast-track large-scale photovoltaic installations throughout Spain.

Atlantium joins GoingGreen Top 100
Atlantium Technologies Ltd. was honored as one of the AlwaysOn Top 100 emerging companies that are creating new business in green technology. Announced at a special reception at KPMG’s office in Silicon Valley, Calif., inclusion in this prestigious group acknowledges the impact that Atlantium’s innovative Hydro-Optic Disinfection (HOD) technology is having on the UV water disinfection industry.

US EPA water course announced
US EPA announced the new Water Quality Standards Academy Basic Course will be held November 26–30 in Arlington, Va. The introductory course is designed for those with fewer than six months’ experience with water quality standards and criteria programs; however, others may benefit, including veterans of the program who want a refresher. To pre-register, go to www.epa.gov/water science/standards/academy. html.

Southwestern salinity levels decreasing
A US Geological Survey (USGS) report concludes that although salinity varies widely throughout the southwest (Arizona, California, Colorado, Nevada, New Mexico, Utah and Wyoming), levels have generally decreased in many streams during the past two decades. Trends in dissolved-solids concentrations in streams were evaluated from 1974 through 2003. Decreases in salinity are attributed, in part, to natural causes, such as geomorphic changes or climate variations, human-related factors and implementation of salinity-control projects. Trends in dissolved-solids concentrations were less apparent in groundwater than in surface water. Salinity levels varied throughout the basin-fill aquifers underlying the southwest, but generally were below 1,000 milligrams per liter. Concentrations exceeded the US EPA secondary drinking-water standard of 500 milligrams per liter (established for taste and hardness) throughout about half of the aquifers.

IWC larger than ever
The International Water Conference (IWC) held at the Hilton Hotel in the Walt Disney World Resort, Orlando, Fla. in October announced a 50-percent increase in the number of exhibitors participating over last year. The presentation program covered more than 12 areas of water treatment technology in 20 sessions, including applications, chemicals and equipment, water re-use and zero liquid discharge. All contained original, peer-reviewed technical content.

EMEC celebrates in Italy
Commemorating 25 years of building one of the world’s largest private solenoid pump and controller companies, EMEC celebrated its silver anniversary at a gala held in central Italy, attended by more than 350 employees, families and representatives from around the globe. The event included dinner and presentations and was topped off with a dazzling music-choreographed fireworks display. EMEC designs and manufactures metering pumps, controllers, sensors and accessories and maintains facilities in Rieti and Milan (Italy), Boston (Mass.), Houston (Texas) and retains distributors in 36 countries.

2007 Bottled water awards
Bottled water companies gathered in Mexico City for the prestigious 2007 bottledwaterworld design awards, organized by Zenith International Publishing. The program attracted a record 169 entries from 32 countries. Best Bottle in PET was awarded to the 1 litre™ Water Company of Markham, Canada for its uniquely designed, proprietary one liter and one-half liter bottles with an integrated PET cup for upmarket restaurants, hotels and spas. The company also received the Best Overall Concept award for its sophisticated, elegant PET bottle, safe poolside or at spa resorts. Danone Waters (UK and Ireland) scooped the Best Marketing Campaign with the Volcanicity campaign for Volvic.

Prize deadline approaching
Less than four months now remain for those planning to enter nominations for the Prince Sultan Bin Abdulaziz International Prize for Water 2006-2008. Closing date for entries for any of the five prizes on offer is 31 December 2007. The prize is intended to reward the efforts of innovative academics and scientists as well as related organizations in the realm of water resources. It has been established to acknowledge the special achievements that have contributed to the development of scientific solutions to solve the problems associated with the provision as well as the preservation of adequate and sustainable water resources, particularly in arid regions.

LANXESS to build India facility
The LANXESS chemicals group announced plans to build a new ion exchange resin plant in the Indian state of Gujarat. Construction on the €30 million (US$42.4 million) site at the new Jhagadia Chemical Park near Baroda is set to begin in 2008. Production is anticipated to start at the beginning of 2010 with 200 new employees. The new plant will manufacture products for industrial water treatment and ultrapure water generation.

Exchange resin facility in China
Rohm and Haas announced its ion exchange resin facility in China is one of four ISO-certified sites expanding operations for a wide range of ion exchange resins manufacture. Over the last 18 months, the company has invested significant resources in its sites in Japan, France, the USA and China. In addition to capturing resin(s) capacity from the company’s UK site, the China facility has been adding additional manufacturing lines and the capacity for acrylic and styrenic anions, cations and drying capability as well as adsorbents. In addition, a dedicated facility for certified pharmaceutical grade resin at the company’s site in France recently received four current Good Manufacturing Practice compliance certificates for its powdered resins used as active ingredients and excipients. Capacity expansions and development work are also underway at the facility in Japan for both cation and anion resins.