5452: New Israeli Standard for Products in Contact with Drinking Water 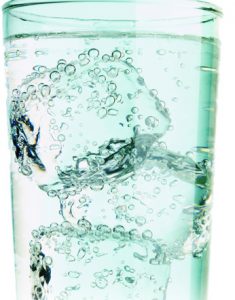 This article surveys the functions of the Israeli Standards Institute, with extensive reference to current activities that include the adoption of standard 5452 which defines the requirements for adjustment of products that come into contact with drinking water with reference to their impact on water quality. The aspects covered are (a) taste (b) appearance (c) development of aquatic microorganisms (d) toxic activity (e) mutagenic activity (f) secretion of metals. This standard is based on and is in part identical to, the Australian/New Zealand Standard 1 AS/NZS 4020;2002 , which is currently under revision and which, upon its completion, will be considered for official publication.

Activities of the Israeli Standards Institute and the official nature of the standard
The Israeli Standards Institute is a statutory corporation operating on the authority granted it by the Standards Law of 1953, prepared by the Ministry of Industry, Trade and Employment. Its operations are sanctioned by this law and include preparation of standards and ensuring the quality of various products. Over the years, in accordance with the developing needs of the market and Israeli society, the Institute’s activities have been extended to encompass all sectors. Today, its divisions include representation from all sectors in the market and society – , state authorities, scientific and research institutes and the business, industrial and consumer sectors – and more. To execute the tasks for which it is responsible, the Institute operates in three main fields: standardization, testing and quality assurance. Basically, Israeli standards are voluntary, but some are converted into a binding standard, either by proclaimation as official standards by the Minister of Industry and Trade, or by publication of a decree or directive by the minister responsible for the particular sector to which the standard applies.

A standard is declared official when it is required or ordered:

Essence of Standard 5452 and background regarding its adoption
The initiative for an Israeli standard for testing of products for use in contact with drinking water arose from the Israeli Ministry of Health; its main reason for initiating the standard was related to health aspects. Until 5452, there was a lack of uniformity regarding the requirements for drinking water accessories and devices. In some cases, there is reference to American standards; in others there is reference to the requirements of the Israeli Ministry of Health. The Standardization Committee decided to prepare a broad-based standard that refers to all products that come in contact with drinking water and to adopt model of the Australian–New Zealand standard.

Standard 5452 defines the requirement for compliance of products that come into contact with drinking water in a system that supplies water via pipes, fixtures, components, electrical water heaters, kettles, containers and devices for water treatment, as well as materials used to coat, protect, connect, seal and lubricate water supply systems and products from the plumbing industry. The standard requires that products designed to come into contact with drinking water will be tested by exposure to water and will include testing their impact on the quality of water based on the following aspects: taste, appearance, microbial activity, mutagenic activity and secretion of metals.

Parameters tested
The following is a review of the background and rationale behind selection of the parameters included in the standard 3. The first section refers to the possible impact on the taste of the water; then a survey of five additional parameters is presented.

Taste
In general, taste can be the result of numerous factors: salts, organic compounds originating from the decomposition of biological substances, by-products of plants and microorganisms, by-products of disinfection materials, growth of microorganisms in the water system, segments of the water network in which there is standing water, or the use of various devices and fixtures unsuitable for use in water.

To examine the impact of the use of devices and fixtures on the taste of water extracted from them, testing is conducted using two different water qualities (a) non-chlorinated water and (b) chlorinated water (with a concentration of one mg/L free chlorine). This was done due to the need to simulate water in a system that usually contains chlorine, that, when combined with certain substances may cause a chlorine-like taste that is similar to the disinfectant. 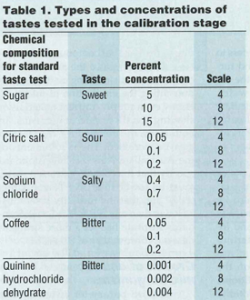 Tasting is performed by a panel of expert tasters, required to undergo a process of calibration and training. Since sensory perception of taste is given to personal interpretation, the panel, usually composed of five tasters, must be tested individually. Panel members are required to be able to distinguish between various basic flavors (sweet, sour, salty and bitter) at various concentrations. On a scale of seven, the maximal permitted error is in the range of ±two units for each concentration. Tested taste types and concentrations are presented in Table 1.

Technologically, the efficiency of the test is limited. It serves as a laboratory simulation of product usage in the field, but the precision of the taste test is lower than that of the results of physical or chemical tests. Nevertheless, this type of test enables (and relies upon) good coordination between laboratories and experienced tasting panels. If an experienced tasting panel identifies an undesirable flavor in the water extracted from a particular product, it is possible that the product adds this flavor and may be rejected for use with drinking water.

Appearance
The second parameter tested according to the standard refers to the possible change(s) in color and turbidity that may be caused due to the device coming into contact with water. These parameters provide an immediate indication of a possible and noticeable change in the water quality and this increases the sensitivity of customers to these aspects.

In general, color enters water through penetration of dissolved substances and turbidity can be caused by penetration of suspended matter, such as clay, silt, finely divided organic and inorganic matter, plankton and other microscopic organisms.

In addition to the impact on the water’s appearance, there are additional reasons to preclude color and turbidity due to the fact that compounds that create color may reduce the available concentrations of disinfecting materials, thus preventing the eradication of microbes. It may even supply nutrient materials or shading for these microorganisms. In both cases, the demand for disinfection may be increased. The requirements of the Australian/New Zealand standard specify that the color in extracted water must be lower than five Hazen Units (HU)* and that the turbidity level must be lower than one NTU; the Israeli Standards Institute has set a more stringent demand for turbidity of 0.5 NTU.

Again, the apprehension is that development of micro-organisms from products coming into contact with water may damage the disinfection capacity, causing an increase in the turbidity of drinking water or adding substances that may affect their taste. Growth of aerobic micro-organisms requires oxygen for biochemical disintegration of organic substances/ oxidation of inorganic compounds. The consumption of dissolved oxygen is directly proportional to the microbial activities and constitutes an indication of its existence.

In 1979, researchers Colbourne and Brown 4, working with 50 substances in the United Kingdom, developed the MDOD index (Mean Dissolved Oxygen Difference), used to assess the link between microbial growth in the laboratory and microbial problems ‘in service’. This surrogate test determines the growth of micro-organisms inn the free floating planktonic form and in the biofilm attached to the surface of the test product, as shown in Table 2. 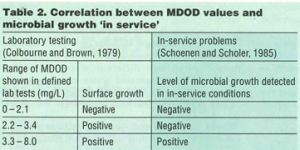 This study provided the foundation for the test. When the MDOD between the extract and the control group is larger than 2.4 mg/L, it is possible that substances that encourage growth of micro-organisms will be released and the product will be considered as unsuitable for uses that involve contact with drinking water.

Activity of mutagenic factors
This parameter (the Ames test**) tests the possibility that substances that may be secreted into drinking water may cause a mutagenic effect that occurs with genetic changes in the existing DNA of the cell’s nucleic substance, which constitutes the code for creation of amino acids. Amino acids are the building blocks of proteins that control and enable the basic functioning of the cell. A change in the basic pairing can create a frame shift mutation or deletion of basic DNA pairs, that may create base pair substitution. Certain chemical structures can serve as clues with regard to possible mutagenic activity. For example, a mutagenic change can be caused due to chemicals that:

In this test, water extracts are added to a system that contains bacteria 5 that have been brought to a condition in which they are incapable of using a certain amino acid. The tested bacterial cell (Salmonella typhimurium) is brought to a condition in which it cannot use the same acid. The existence of a mutagenic factor causes a mutation that preserves the cell’s ability to use this amino acid, and this is observed in the tested system.

Toxic activity of water extract cells
The basis for this test is a cytotoxic evaluation of the substances found in the product extract. Basically, cell tissue contains healthy cells of a circular shape. In this test, the affect of the water extract on the growth of the cell line is examined. In general, toxic activities can prevent healthy growth of cells and can even kill them. The test is conducted on kidney cells of the African green monkey. Findings do not necessarily indicate toxicity for humans, but do indicate the existence of secretion of substances from the product to the water, and require further testing in order to approve the product for use with water.

Cytotoxic faults are usually linked to one or more of the following factors.

The process of testing the extract and the relevant parameters are presented in Figure 1. 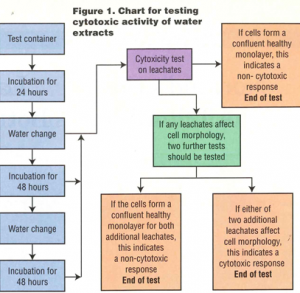 Extraction of metals
The sixth parameter tested according to the standard is extraction of metals. In general, treated drinking water does not contain (or contains only minute traces of) metals that constitute a health risk to the public. In production processes, metals may originate from residues of various materials, such as the use of lubricants that contain antimony. The extraction process for conducting the metal extraction test is executed with a hardness of 50 mg/L (as calcium carbonate) 6. The Israeli Standard for maximum permitted concentrations of metals 7 is one-tenth of the maximum level permitted according to the Israeli Public Health Regulations for Drinking Water, which is based on the fact that the water supply system contains numerous components, and each component may serve as a potential contributor and add its part: the sum of all the contributions can reach the maximum permitted level. In the revision of this clause, a demand will be added for additional elements, such as: iron, copper, zinc, aluminum, manganese, tin, beryllium, thallium and phthalates in plastic piping. Table 3 presents the types of metals and the recommended values, including comments referring to the possible secretion sources of the metals. This test is not designed to examine corrosive aspects. 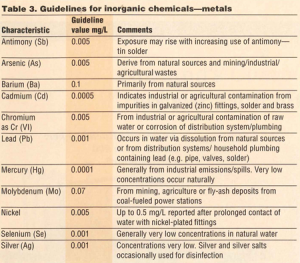 Summary
The Israeli Standards Institute, acting in accordance with the Standards Law of 1953, has for dozens of years been working conscientiously to prepare standards and ensure the quality of products. Work on Standard 5452 is designed to ensure the quality of products coming into contact with water, while examining the possible effects on taste, toxicity, mutagenic activity, appearance and growth of microorganisms. The Standard’s complexity and its commitment to test the entire range of aspects reviewed, is an expression of the standardization staff’s constant efforts to protect public health.

Glossary
Hazen Units: Water’s color is expressed in units of the platinum-cobalt scale proposed by Dr. A. Hazen (1892). A unit of color is produced by one milligram per liter of platinum in the form of the chloroplatinate ion.

Acknowledgments
The author would like to thank Mrs. Irit Hen, Water National Engineer of the Israeli Ministry of Health and Mr. Evgeny Rosemblum, testing engineer of the Standard Institute of Israel, for their assistance in writing this paper, as well as Danny Targan, Chief Executive Officer and Eldad Maziel, Chief Technology Officer of Tana Water, for their encouragement and support.