According to a recent report, The Membrane Microfiltration Market, this popular membrane process is finding widespread global application for numerous functions. One of the largest and fastest growing areas is potable water treatment.

The most ‘open’ of the membrane processes, microfiltration (MF) falls between granular media filtration and ultrafiltration, relying on membranes with pore sizes from about 0.1µm to 1.5µm. MF is ideal for removing suspended particles, conventional clays at the lower size range and humic acids (suspended or non-dissolved) at the upper; as well as microorganisms as small as bacteria, algae and cysts, but larger than viruses.

In the 1980s, low-pressure MF membranes were introduced for treating surface waters, providing several advantages over conventional filtration and disinfection. In the 1990s, the cost of low-pressure membranes dropped significantly, making large-scale implementation of the technology possible. During the mid-90s, a sharp rise of MF water plant installations resulted from Cryptosporidiosis outbreaks in the U.S. and Canada, followed by stricter laws regarding waterborne pathogen removal.

All commercially available MF membranes used for potable water treatment are constructed in a hollow fiber configuration operated in either ‘inside-out’ or ‘outside-in’ mode. In the former, the pressurized feed flow is on the inside of the fiber and water permeates to the outside of the fibers, which are potted at one or both ends in a membrane housing. In outside-in mode, the feed flows from the fibers’ shell side and passes into the membrane core. The average inside diameter of a capillary fiber is one to two mm; thousands of fibers are anchored within housings to form membrane modules.

MF membranes are engineered to operate in one of two ways: submerged or pressure-driven systems. In submerged systems, the membrane module is immersed in the feedwater and clean permeate is withdrawn via vacuum. In pressurized systems, feedwater is sent through the membrane by means of pressure, usually created by a pump.

Major manufacturers of MF membranes for drinking water treatment include Asahi Chemical, which licenses its technology to Pall Corp. in the U.S.; Hydranautics, the U.S. division of Japan-based Nitto Denko; and Siemens’ USFilter/Memcor division. Memcor, a pioneer in the acceptance of MF for large-scale drinking water treatment, is the undisputed market leader.

MF is advantageous for drinking water treatment because it operates at low pressure (20-100 psi) or negative pressure, produces water of satisfactory turbidity, removes bacteria and the protozoan parasite Cryptosporidium and removes Giardia as high as six logs. MF membranes also provide virus inactivation of 0.5-log (68 percent) and disinfection by-product removal of about 10 percent. On the downside, MF membranes are ineffective for removing any dissolved matter that can cause off-colors, tastes and odors. 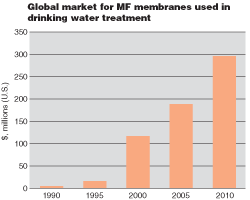 Water quality
Once largely drawn from aquifers, municipal drinking water is increasingly derived from lower quality surface sources, such as rivers, lakes and reservoirs. Pollution, too, is a problem that limits available water supplies and degrades the water quality thereof. Compromised water sources are in need of highly effective treatment methods, such as MF, that prevent harmful substances from exiting at the tap. 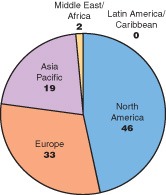 Government regulation of drinking water contaminants is the most important factor in forecasting growth. In the U.S., the 1974 Safe Drinking Water Act (amended in 1986 and 1996) and the 1989 Surface Water Treatment Rule (enhanced in 1998 and several times since) were instrumental in establishing potable water quality guidelines. Because membrane filtration is essential to removing pathogenic microorganisms as mandated by the Safe Drinking Water Act, it is expected that conventional drinking water treatment will eventually be completely replaced by membrane systems.

Consumer awareness regarding drinking water quality also plays a part in the growth of the environmentally friendly MF process. In addition to water-related illness and deaths, public concerns include recent research linking water contaminants to health problems, infertility and miscarriages; and the use of chemical disinfectants that may be carcinogenic. There is also concern about municipal water purity amid fears of terrorism.

The Long Term Enhanced Surface Water Treatment Rules
In early 2002, the U.S. EPA released its final ruling on Cryptosporidium for small public water systems (serving less than 10,000 individuals) that use surface water, or ground water under the direct influence of surface water, requiring a two-log removal of the protozoan in the final drinking water product. The Long Term 1 Enhanced Surface Water Treatment Rule (LT1ESWTR) was designed to improve the control of microbial pathogens, specifically Cryptosporidium, in drinking water and address risk trade-offs with disinfection by-products. The rule requires systems to meet strengthened filtration requirements as well as calculate levels of microbial inactivation to ensure that microbial protection is not jeopardized if systems make changes to comply with disinfection requirements of the Stage 1 Disinfection and Disinfection Byproducts Rule.

Physical removal, using a process such as MF, is essential to controlling Cryptosporidium because the microorganism is highly resistant to standard disinfection practices. According to the LT1ESWTR, “…conventional and direct filtration systems must comply with specific combined filter effluent turbidity requirements while alternative filtration systems (systems using filtration other than conventional filtration, direct filtration, slow sand filtration, or diatomaceous earth filtration), must demonstrate the ability to achieve two-log removal of Cryptosporidium and comply with specific State-established combined filter effluent turbidity requirements.” The regulation also states there may be advantages to reducing co-occurring contaminants and that, “…some membrane technologies installed to remove bacteria or viruses can reduce or eliminate many other drinking water contaminants including arsenic.”

Arsenic removal for small water systems
In January 2001, the U.S. EPA published a final Arsenic Rule that established a revised maximum contaminant level of 0.010 milligrams of arsenic per liter, or 10 parts per billion (ppb). All community and non-transient, non-community water systems, regardless of size, were required to reach compliance by January 2006. The EPA estimates that nationwide, roughly 97 percent of utilities failing to meet the new standard are small systems with an average demand of less than 1.4 million gallons of water per day. Most affected systems are small western water utilities that draw drinking water from deep underground wells.

MF is an attractive arsenic treatment process for small water systems and can address numerous other water quality problems, while maintaining simplicity and ease of operation. The molecular weight cutoff of MF, however, necessitates the use of a coagulation stage to generate insoluble arsenic-laden floc. In coagulation-assisted MF, the granular media filtration step used in conventional water treatment is replaced by forcing the water through a semipermeable MF membrane, which retains As(V)-laden floc formed in the coagulation step.

The use of pre-engineered coagulation/MF package plants is suitable for small system installations where water quality precludes the use of conventional adsorption treatment. Installation of traditional coagulation and filtration for arsenic removal is generally not economical. The membrane must be backwashed periodically to dislodge solids and restore flux. Backwash water, typically a high-volume, low solids waste stream, is treated by indirect discharge or dewatering and sludge disposal, depending on its properties.

Outdated infrastructure
A large majority of municipal water treatment plants are operating beyond their useful lives and desperately need capital improvements. About 58,000 community water systems in the U.S. provide service to an estimated 226 million consumers. More than 87 percent of these utilities are publicly managed. The U.S. EPA estimates more than $130 billion is needed now to build new facilities and improve existing ones. Similar conditions exist in Europe, where aging and outdated water systems, especially in Eastern Europe, need billions of funding dollars to meet population growth and European Union standards.

Water quantity
Population growth is placing increased demand on strapped water utilities that are at times unable to supply their customer base. In both the U.S. and overseas markets, a growing and potentially large-scale application of MF exists in pre-treating water destined for reverse osmosis (RO) filtration/desalination. Growing global water shortage is one of the most serious crises of the 21st century. RO desalination of brackish (mixed salt and fresh) water and seawater can bring increased potable supplies at surprisingly low cost. However, these raw water sources require the removal of colloidal particles, bacteria and other contaminants to protect the RO membranes from fouling and failure. The cleaner the feedstream entering RO membranes, the longer the membranes will last.

Hollow fiber MF membranes can be used to remove colloidal particles, plankton, bacteria and algae from raw seawater. Demand for membranes in this application has grown rapidly in the past five years and several plants have been built to treat water volumes up to 25 mgd. The cost for membrane prefiltration is from 20-25 percent of the total price of desalination. Although the expense is greater than the cost of conventional pretreatment, which ranges from 10-15 percent, the membrane system is simpler to operate and more reliable, particularly for small- to medium-sized plants.

Improvements in membranes and systems
Technical improvements in membranes and systems have paved the way for their increased adoption in potable water treatment. The new generation of membranes is designed to be more foulant-resistant, robust and reliable, while membrane systems can now be operated at lower energy cost and with less operator attention than previously possible. The most successful potable MF system makers design their units specifically for the municipal market and ensure that those systems meet current regulatory requirements. Some take the added step of acquiring certification for their technology with the appropriate government agencies.

The improved economics of membrane systems also contributes to their rising popularity. For many applications, MF membrane costs have dropped more than 80 percent since the 1990s. MF system costs also have decreased significantly as a result of increased competition, better system design and lower manufacturing costs. MF operating costs have decreased due to improvements in materials and modules, such as chlorine resistance, greater surface area, higher permeability and longer membrane lifetimes.

The primary obstacles preventing the adoption of MF for drinking water treatment are the cost and time needed to pilot test systems for the application, especially in light of varying approval processes from region to region.

About the company
BCC Research (formerly Business Communications Co., Inc) is a leading information resource producing high-quality market research reports, newsletters and conferences. BCC’s information products explore major market, economic, scientific and technological developments for business leaders in industrial, pharmaceutical and high technology organizations. Industry analysis and market forecasts for advanced materials, high-tech systems and components, nanotechnology and novel processing methods are at the forefront of the company’s expertise. The BCC market opportunity report “MST-028C The Membrane Microfiltration Market” (March 2006) provides an in-depth analysis of the technical and market drivers relating to the market for MF membranes, evaluating their current worth by application, and forecasting growth and trends in the various sectors over the next five years. For more information on report “MST-028C”, visit www.bccresearch.com or call (866) 467-7847.