Introduction
In the past, non-chemical approaches to cooling tower water treatment have failed to provide a complete solution to all issues (namely, scale, fouling, corrosion and microbiological contamination) while traditional chemical treatments have delivered inconsistent results. With the 1990 ban on chromate use in towers, the situation worsened considerably, particularly with respect to microbiological control and related corrosion problems.

Essentially, the evaporation of cooling water alters water quality well beyond the mere removal of solvent to concentrate dissolved solids. While aeration (expectedly) evaporates water for its cooling effect, it also strips volatile acidic gases, such as carbon dioxide and free chlorine (if added) from solution until the pH rises to hover around 9.0. Thus, the dual changes of evaporation and pH rise close in jointly to squeeze a mixture of formerly dissolved solids out of solution—such as inorganic scale and organic nutrients. 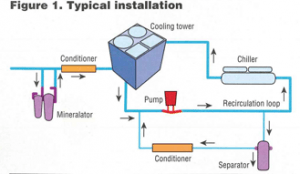 Avoiding carbonate scale that may concentrate organic nutrients up to 0.05 percent (500 ppm) still leaves a mild concentrate of organics in solution to create a residual biofouling effect with related biocorrosion hazards. Standard chemical practices have to deal with a roller coaster ride of rising and falling pHs as induced by hour-to-hour shifts in cooling demand. Reagent additions contribute to the dissolved solids build-up of the water and organic biocides often revert chemically into becoming extra biofouling nutrients.

Different attempts, similar problems
Ozone, one of the most successful of lesser-contaminating chemicals, has been successfully applied in cooling towers to control microbiological contamination, but it does not control scale and corrosion. Non-chemical water conditioners have been used to control scale, particularly in Europe, but alone, do not provide full microbiological or corrosion control.

Traditional chemical treatment, as hampered by the ever-changing water conditions of the typical ‘open’ tower, admits to an amount of scale build-up in their circuits during the year. While properly set up chemical feeds adjust to changes in conditions, in our market areas such systems, in practice, seem to be an extinct species. Harsh heat exchanger cleaning is the norm, performed on a quiet but regular basis. Facility owners tacitly accept the periodic cleaning out of scale and fouling from the pipes, tubes and fill of their systems seasonally as needed with traditional chemical treatment. In addition, there are other issues related to excess corrosion or Legionella infestations that often go unnoticed (until too late) in the absence of regular testing programs.

There is a growing demand for non-chemical treatment driven by stricter municipal discharge regulations and a broad industry-led movement towards green building and industrial facility operation.

A non-chemical solution
One company is meeting this growing demand with a breakthrough in implementing a practical non-chemical solution. It approaches the challenge of treating cooling tower water with a complete patented process consisting of three proven and thoroughly field-tested components. The entire system can be easily retrofitted on any size system to control all the water treatment issues.

How it works
The first component is a patented electrostatic physical water conditioning (PWC) device designed to eliminate scale and inhibit corrosion. To date, more than 50,000 of these devices have been successfully installed worldwide by the manufacturer, in applications ranging from municipal water treatment facilities to pulp and paper processors to cooling towers and boilers.

PWC devices have a long history of failure, most of these with magnetic, then electrolytic and now electromagnetic devices due to improper design, application or simply flawed principles. Some rust or corrode, some cause corrosion, some accumulate inactivating surface debris and still others show design flaws or are inappropriately installed.

The new PWC device was developed in collaboration between the National Research Council (Canada) and an experienced research team that unraveled the working fundamentals of PWC technology. The device, as a fourth generation of evolved PWC technology, possesses no moving parts, requires no input electricity and is self-cleaning with the ability to perform optimally for 20+ years. The fixed electric charge of the unit’s water contact material utilizes the flow energy of the water itself to achieve its anti-scaling effect.

Flow turbulence, as designed into the new unit, serves to maximize contact between the bicarbonate ion present in the water and the electrostatic surface charge (i.e., zeta potential) intrinsic to the solid/liquid interface. Turbulent ‘swiping’ of the bicarbonate ion against this charged surface differentially pulls the positively charged hydrogen ion away from the doubly negatively charged carbonate portion to create a large boost in dissolved carbonate. This massive, though temporary, increase in carbonate causes an interim super saturation of the carbonate-versus-calcium ion combination in the water. Downstream piping, constantly immersed in supersaturated flow, nucleates and grows ‘break-off’ scale particles of suspended calcium carbonate, borne along in now unsaturated water. Seeking to restore its prior level of soluble calcium, the water then preferentially attacks any previous equipment scale encountered in its path, while enabling a magnetite oxide layer to form on cleaned-up iron surfaces for additional corrosion protection. While this has not been scientifically proven, we have documented it (by in-person observation) when we have had the opportunity to inspect treated systems.

The second component, a hydro cyclone, separates and removes all large particles (>40 microns) that are produced by the ‘swiping’ action of the PWC without altering the unsaturated state of the water. These two devices working together serve to eliminate 80-90 percent of biofouling and microbiological activity simply by removing most of the nutrient substrates. While only a one-log reduction, it is a great asset for the trace level of minerals that we next identify to finish the job (by an additional five-log). These are, therefore, preliminary reductions and serve to reduce the necessary amounts of iodine and zinc.

The third component, a mineralator, provides insurance against any remaining microbiological activity. It is reliably set up to add iodine and zinc to tower make-up water at trace levels so low that it needs to dodge the traditional definition of ‘chemical treatment’. Additions of only one two-hundredth of the amount of normal biocide stay within drinking water limits for these minerals; yet, they prove fully effective—partially because of nutrient deprivations provided by the PWC-hydro cyclone combination and partly by the very choice of these minerals.

Since the 1940s, iodine has proven to disinfect water very effectively,1 even killing Legionella (up to 99.99999 percent),2 while NASA uses it currently for disinfecting recycled potable water on space vehicles.

In the aeration of the cooling tower environment, it serves even more ideally. Compared to the other halogen disinfectants, iodine does not get stripped away into the air flow; retains its full disinfecting efficiency well beyond pH 8.5 (up to 10.0!) and uniquely, though slowly, becomes re-oxidized by aerobic conditions from ‘spent’ iodide back into active free iodine. The 24-hour, seven-days-a-week aeration in towers gives even a trace of iodine all the CT (concentration x time) opportunity needed to wipe out biological growths.

Trace zinc is used to inhibit blue-green algae resistant to trace level iodine in sunlit environments and zinc also synergistically assists iodine to knock out some of the tougher microorganisms, such as the Pseudomonads.3 Zinc’s lowered 0.3 mg/L Zn solubility at pH 9.0 also has the advantage of saturating tower water with zinc ion so that galvanized surfaces are no longer as subject to leaching or ‘white rust’ concerns.

Compared to typical post-chromate operations needing seasonal acid or rodding descaling, making the move to a more chemically free system is good for the environment and allows owners to realize savings of up to 25 percent on the cost of energy. Casey and Wetegrove,4 in publishing well-accepted calculations on behalf of Nalco, indicated that a 1,000 ton facility would pay an extra $6,800/annum for a mere 0.012 inches (0.3 mm) of fouling; $14,800 for 0.024 inches and $20,800 for 0.031 inches—provided power costs were only 5.0¢ / KWH. Also, a U.S. Department of Energy (DOE) Technology Alert conditioner study report5 (www.conditionwater.com/doereport) gave a 1998 Table 1 energy loss of 12.4 percent for a 0.0625-inch scale build-up; but only the fuel energy (extra pump runs not included) was counted and only hard inorganic scale seemed to be assumed.

In addition, because no significant chemical solids are used, water consumption can be similarly reduced 25 percent or more as operations can be run up to higher cycles of water evaporation. The crucial conditioners for the system have operated in North America quite maintenance-free, with some operating for over 11 years.

Conclusion
Reduced-chemical water treatment technology is a viable option to traditional chemical treatment for owners who wish to go green and save money at the same time.

About the author
F. James (Jim) Dart is a Chemical Engineer (University of Toronto, ’58) and a Life Member of the AWWA. He assisted in the EnviroTower enterprise following a 34-year career with the Ontario Ministry of Environment that included the development of a practical silicate process for sequestering iron and manganese and the troubleshooting of various chemical and biological problems in potable water supplies.

About the product
Launched in January 2005, the EnviroTower™ patented system controls problems such as scale, fouling, corrosion and microbiological contamination, creating a clean system that maximizes operating efficiency and minimizes corrosion causing bacteria and other potentially harmful organisms, like Legionella.