By Henry Nowicki and Barbara Sherman

We previously provided information about an exciting advanced test method for the activated carbon industry.1 This method is now in the literature with two names: Gravimetric Rapid Pore Size Distribution (GRPD) and determination of Adsorption Energy Distributions (AED). We plan to help make the sorbent industry aware of this powerful new test method. Perhaps the GRPD is the best available test method to provide sorbent characterizations.1

We are providing here a case study from 2003 work at our laboratory where we used both classical test methods, long used by the activated carbon industry and the relatively unknown (to you) GRPD technology. 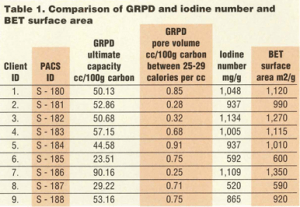 Executive summary
When interpreting data from the adsorption potential distributions on Tables 1 and 2, the adsorption energy in the first column relates to the pore binding strength. The higher the number (29 is the highest) the stronger the adsorption. The pore volumes (cubic centimeters per 100 grams of powdered activated carbon) for each of the nine samples is accumulative. In the instrument measurement process the sample starts out hot. At this temperature, the sample has the least amount of gas phase adsorbate pick-up—only the high-energy sites can capture and hold the adsorbate. The sample is temperature programmed and cooled to allow the weaker adsorption potential sites in the PAC to pick up the gas phase adsorbate. Our coolest sample temperature inside the instrument gives the highest amount of adsorbate pick-up and highest total pore volume. The analysis cycle is fully pre-programmable and automated for linear ramp rate, temperature range and temperature dwell periods. This ultimate total pore volume is read across from the zero adsorption potential in column one into the row for each of the nine samples. The volume for high energy binding sites in the powdered carbons between 25-29 calories per cubic centimeter is listed in Table 1 from raw data in Table 2 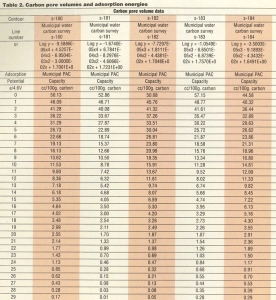 . Data in Table 1 shows the correlation of GRPD total pore volumes (ultimate volumes) with iodine numbers. More importantly, the GRPD method reveals the volume of high energy binding sites but the Iodine Number does not. These high-energy sites clearly differentiate the sorbents. 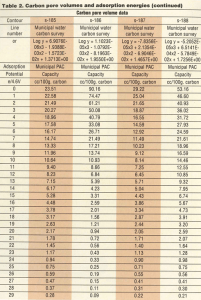 The physical chemistry and fundamental knowledge to appreciate and apply this advanced test method is provided each October in Pittsburgh, Pa. with Dr. M. Manes, Dr. H. Nowicki, Dr. M. Greenbank and Wayne Schuliger, P.E. in a practical series of educational courses. The authors recommend that you acquire and apply this knowledge from these instructors while you can.

This characteristic curve data can then be translated into single and multicomponent adsorption isotherms using computer prediction programs based on Polanyi adsorption potential theory.2 This is also the only carbon adsorption data required to be input into these performance prediction programs that can model most any gas or liquid phase application. A computer data library of these activated carbon characteristic curves can then be used to optimize the carbon selection for a given application.

Our library has over 500 activated carbons, including commercial carbons, plus a variety of exotic carbons from unique raw materials. A given activated carbon product performance can be compared to standard commercial carbons for any application area selected. This quickly allows the determination of true differentiation in product properties or in adsorptive performance before spending time, effort and money on activation equipment or process development.

Experimentally the characteristic curve can be defined by measuring adsorption over the range in pressure, or concentration, that utilizes all of the different adsorption sites. Many different experimental methods and any gas or liquid-phase adsorption system can be used. For best results, the following criteria should be used for selecting a characterization method:

For a full characterization of activated carbon pore structure, a fully automated, modified thermogravimetric analyzer generates over 200 points over seven orders of magnitude adsorption isobars. This instrument accomplishes the above goals by directly measuring the amount adsorbed gravimetrically, using a flowing stream of pure gas adsorbate to minimize concentration gradient complications and changing the relative pressure by changing temperature.2 The carbon sample is conditioned to 250°C in helium. As a standard adsorbate 1,1,1,2 Tetrafluoroethane (H-134a) is used because it is safe (nonflammable and low toxicity), inexpensive and readily available. By cooling, then heating the sample, both adsorption and desorption isobars are measured and if the results coincide, equilibrium is demonstrated (in practice, small differences in the curves are accounted for by using an average of the two curves). The resulting characteristic curves are fit to log/linear polynomials for use in the performance prediction programs. 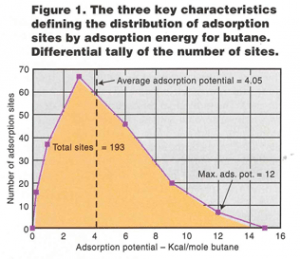 Activated carbon specifications
The problem with full characterization of carbons is that few people have the means or equipment to satisfy the above criteria, yet. A full characterization is not presently a viable means of specifying activated carbons. However, one of the key characteristics defined in the full distribution is total adsorbing pore volume. Therefore, simple tests that measure these three characteristics directly can be used as specifications. The following are test methods that directly measure the three parameters of the chi square distribution.

1. Total adsorption pore volume approximated using standard ASTM test methods
Unfortunately, existing standard test methods for activity numbers and the specification tests for commercial activated carbons tend to measure just total pore volume and not the pore size and volume distribution or the full adsorption isotherm. The existing specification tests are only about one third of what is required to truly define an activated carbon.

The activity level for activated carbon is measured by adsorbing a gas or solute (iodine, butane, carbon tetrachloride and nitrogen are popular) at near saturation conditions, thus filling all the pores with any significant adsorption force present. The measured amount adsorbed on the carbon is roughly proportional to the total adsorbing pore volume converted and is reported as an activity number, or index. For relative comparison, or a specification test, the units are not important. For comparison to actual total pore volume, the values are converted to units of cubic centimeters pore volume occupied per gram carbon (the observed density for iodine in the carbon pores is only about 40 percent of the handbook value). This density discrepancy is due to restrictions of iodine crystal packing in nano-spaces.

These existing test methods do define the carbons in some instances. For example, when you have only a single family of activated carbon products (with apparent densities ranging from 0.2 grams per milliliter to 0.8 grams per milliliter) that can be made from a given starting material. As a result, there are distinct relationships between activity numbers and pore size distributions for a given starting material and activation process. Thus, if the activation process and starting material are defined, then the activity number can indirectly define pore size distribution—and thus performance—and activity numbers work as specifications.

A simple, fast and portable test is heat of immersion. A small portable heat of adsorption measurement equipment is commercially available. This equipment will allow a direct comparison of the adsorption characteristics of two carbons in a test that takes only a couple of minutes. The adsorbate is typically mineral oil, because it is inexpensive, safe and readily available; but can be glycerin, glycol or corn syrup to make the test more relevant to the specific customer application. The results translate to relative comparisons between carbons for average adsorption force (adjusted for total pore volume).

There are a variety of trace adsorption test methods that can be used. A gas phase adsorption measure is faster, simpler and less expensive that most liquid phase approaches. For an accurate measure of a single isotherm point, activated carbon loading curves versus time are generated, at pressures from 100 microns to 6 atmospheres, using an automated molecular probe device. For estimating the maximum adsorption force, typically the adsorbing gas is pure methane at atmospheric pressure onto a vacuumed activated carbon. The carbon is conditioned by vacuuming to 10 microns and equilibrium is determined when the loading curve no longer changes with time. The results can also be correlated directly to carbon performance in many trace adsorption applications.

Heterogenity testing of activated carbon
A problem arises when the carbon product is not homogeneous in its activity number, either between granules (interparticle), or within a granule (intraparticle). In the case of a heterogeneous sample, the activity number averages to the measured value for the overall sample, but the pore size distribution is distinctly different for different granules (or parts of a heterogeneous granule). For the pore size distributions, a different shape is observed when combined, generating multiple modes (or humps) rather than simple numerical averaging. As a result, characteristic activity numbers or specifications relate to performance only when the sample is homogeneous, both particle to particle and within each particle. Heterogenity can cause as much as a tenfold decrease in performance for municipal drinking water carbons in removal of trace contaminants such as MTBE.

A heterogeneity test measures the difference in adsorption characteristics (heat of adsorption is standard) between the inside and outside of the particle, large and small particles and high and low density particles (mixed products). A differential heat of adsorption instrument is used for making relative comparisons of adsorbent samples by directly measuring the difference between the adsorption characteristics of different samples or portions of a sample (or particle).

Acknowledgment for outstanding achievements
During Dr. Mick Greenbank’s three years with PACS Pittsburgh/Orlando based science firm, he lowered the cost to manufacture the testing instrument and most importantly found the ideal challenge gas 1,1,1,2-Tetraflourethane (TFE) for his methodology. Previously his test method was performed with methane, ethane and propane as a suite of challenge gases.3 This tri-fold suite covered six orders of relative gas concentration, whereas TFE covers eight orders of concentration. To detect and quantify the number of the highest energy binding sites in a sorbent you need the lowest concentration of challenge gas and a difficult molecule to adsorb. TFE is the ideal challenge gas. We take our hats off to Mick.