Introduction
Disinfection by-products (DBPs) are a group of chemical contaminants formed in water during the disinfection process. Many DBPs are formed by the reaction between chlorine and natural organic matter (e.g., humic and fulvic substances) in the water. Two major groups of DBPs are trihalomethanes (THMs) and haloacetic acids (HAAs). Both THMs and HAAs are possible/probable human carcinogens. Currently, four THMs (THM4, chloroform, dibromochloromethane, bromodichloromethane, and bromoform) and five HAAs (HAA5, monochloacetic acid, monobromoacetic acid, dichloro-acetic acid, dibromoacetic acid and trichloroacetic acid) are regulated by U.S. EPA Stage 1 Disinfectants/Disinfection By-products (D/DBP) Rule.1 The maximum contaminant levels for THM4 and HAA5 under this D/DBP Rule are 80 and 60 µg/L, respectively. The Enhanced coagulation and alternative disinfectants are common practices for water utilities to control DBPs in their finished water.

Point of use (POU) carbon filters are commonly used to remove taste and odor compounds in tap water. For larger particles, such as Cryptosporidium and Giardia cysts, the removal depends on size-exclusion filtration. For organic contaminants, the main mechanism is adsorption. Activated carbon adsorbs a wide range of chemicals, including THMs and HAAs. However, physical adsorption also has limitations. For some DBPs, such as HAAs, the carbon adsorption capacity is relatively low. Frequent replacement of carbon filters may be required for reducing the level of HAAs by adsorption. However, biofilm formation can be expected in a carbon filter. For biodegradable DBPs, the biofilm on carbon’s surface may aid the removal process and result in a longer lifetime of the carbon filter.

In another study, six different POU carbon filters were tested for their DBP removal efficiencies.3 The influent tap water containing both THM4 and HAA5, was fed continuously to the filters which were operated until reaching the maximum flow capacity specified by the manufacturer. The THM removal efficiencies were 41 to 98 percent for the six filters tested. All six filters showed a similar effluent profile. Figure 1 represents the THM4 concentrations for one of the faucet-mounted filters. The manufacturer’s recommended filter hydraulic capacity, 100 gallons, was exhausted within five hours by continuous operation. The effluent concentrations increased slowly, which represented a typical carbon adsorption pattern. The THM effluent concentration was substantially lower than the influent level within the flow capacity of POU filters. The study indicated that four of the POU carbon filters effectively reduced the THM4 levels by 90 percent or better.

HAA removal
In the six POU carbon filter studies mentioned above, HAA removal efficiencies were 41 to 89 percent.3 Figure 2 shows the HAA5 concentrations from one of the faucet mounted filters. The effluent concentration rose more rapidly than for THM4 (Figure 1). 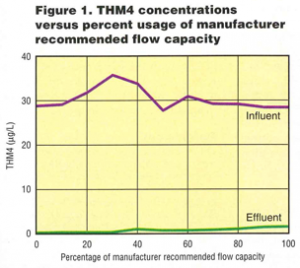 This was because most HAAs have lower adsorption capacities than THMs (Table 1b), thus lower removal efficiencies were expected. The testing period for the filters ranged from five to 24 hours under this study and did not reflect a normal household usage pattern. Filter manufacturers’ recommended replacement time for the POU filters are usually two months to one year. Microbial activities can develop on the carbon surface during this period. The porosity of the activated carbon provides a surface for bacterial attachment and colonization. It also protects bacteria from high fluid shear forces and provides moisture when the filter is not in use. Since some organic contaminants in the tap water are biodegradable, the bacterial community on the carbon surface can aid removal of contaminants. Therefore, biodegradation should also be considered as one of the organic removal processes in POU carbon filters. 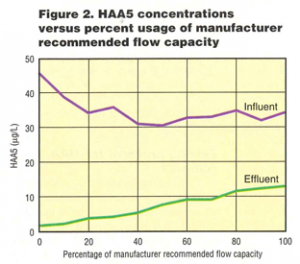 Several studies have also revealed that HAAs can be removed by full-scale aged GAC filters (from six months to several years on-line)4-6 in water treatment plants. From observation of a full-scale GAC filter, HAA in the effluent can be reduced even after the carbon was saturated.2 For this full-scale GAC filter, the HAA removal process was a combination of adsorption and biodegradation. Almost no HAA was detected in the effluent in the first few days of filter run which implies adsorption was the major process of HAA removal initially. After breakthrough (about 10 days), the effluent concentrations increased along with the time, indicating that the activated carbon was reaching saturation. The effluent concentration starts to decrease after 25 days. This indicates that biological activities had developed and a nearly complete removal of HAAs was observed after 30 days. The carbon saturation for THMs was reached after 90 days and no significant biodegradation of THMs was observed.

Testing protocol for HAA removal
According to the NSF/ANSI Standard 53, the removal efficiency for volatile organic compounds (VOCs) in a POU carbon filter is determined by an intermittent flow protocol with 10 percent on and 90 percent off cycle. Depending on a POU unit’s total flow capacity, the time required to finish this test varies from a few hours to several days. Under the Standard 53 certification test protocol, for a faucet-mounted POU with a capacity rated at 100 gallons, it takes only two days to finish the test (with an average of 0.35 gal/min flow rate). In this relatively short-term test, the major removal process is carbon adsorption. Minimal biodegradation could be found due to time constraint on biofilm development.

For easily biodegradable DBPs, such as HAAs, the short test period might underestimate the overall removal efficiency, especially biodegradation in the filter. Under a normal household usage, with filter replacement times ranging from two months to one year, bacteria from municipal water will be collected and colonized on the carbon surface. Because biological degradation may also be an important process for HAA removal in carbon filters, a complete removal may still be observed after 120 percent of the manufacturer’s recommended flow capacity.7 Unlike carbon adsorption, the biodegradation process will keep functioning even after the carbon adsorption sites are saturated.

For less biodegradable compounds, such as THMs, the short-term testing protocol should be sufficient, since the major removal process is adsorption. For easily biodegradable compounds, such as HAAs, a longer testing time may be needed to reflect the biodegradation of HAAs. The certification test in NSF/ANSI Standard 53, which represents adsorption only might underestimate HAA removal by a POU carbon filter. The impact of biodegradation under a normal household usage pattern should be studied in POU carbon filter testing.