On the Road with Falsken Water Systems 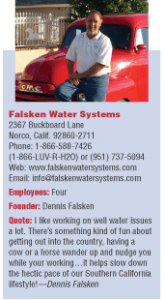 Introduction
For Dennis Falsken of Falsken Water Systems in Norco, Calif., success in the water treatment business is a very personal affair. In a state where the industry’s largest manufacturers make millions of products and the largest dealers serve thousands of customers, Falsken is an independent owner with a smaller focus.

“I’m the guy answering the phones when customers call us. I’m who goes into the customers’ homes. I also do a good part of the service and installations myself,” he said. “To me, a successful business is the one where the owner gets to see a satisfied customer face-to-face.”
Falsken got into the water treatment industry almost accidentally. Before opening Falsken Water in the 1984, he worked in the liquor industry at a bottling plant in California.

“We were ahead of the curve at that plant. We installed our own processing plant to reduce the costs of buying water from a local bottled water company. The system used carbon filtration, softeners, ozone, ultraviolet and deionization along with a 20,000 gpd RO system to process the water used for mixing with the bulk liquor back in the mid-1970s,” Falsken recalled. “Over the years, I learned from the technicians and did my own research on how it all worked and why. I got really comfortable with the whole water treatment process.”

In 1984, when Falsken’s wife was pregnant with their first child, the couple had concerns about drinking the water in their community. Local officials in Norco at the time recommended that the elderly, pregnant women and infants should avoid drinking the well water that was supplied to the community because of elevated nitrate levels.

“I knew about home RO systems and took a shot at installing one under our sink at the house,” he said. “A few weeks later, a neighbor asked if I would install one in their home and it just took off from there.”
Out of those first installations, Falsken Water Systems was born and has remained a trusted name in water treatment for the people of Norco.

According to Falsken, the once-agricultural town and the surrounding communities have significant hardness problems, as well as the pervasive concerns created by pesticides used on the region’s many citrus groves. As a result, a growing percentage of new Falsken Water customers are private well users.
“I like working on well water issues a lot. There’s something kind of fun about getting out into the country, having a cow or a horse wander up and nudge you while you’re working,” he said. “It helps slow down the hectic pace of our Southern California lifestyle!”

Success is staying small
Falsken strives to maintain the small size of his water business. Serving about 600 customers with three part-time employees, he believes the key to his continued success in the industry is providing quality equipment and top-notch customer service, “and I can’t emphasize enough the importance of having dedicated, knowledgeable equipment suppliers,” he added.

“I have nothing but respect for the larger dealerships and the franchises, but I think there’s something really great about being the guy who is out on the road every day.”
When you call Falsken Water Systems, he answers the phone, often while he’s driving, on his way to a sales call, service call or an installation.

“We’ve been a larger operation in the past and there’s a lot of benefit to that,” he said. “But I don’t think the long-term goal is huge growth…it’s more personal than that.”
Instead, Falsken said he plans to focus even more on well water treatment, and expanding the company’s presence by targeting customers interested in office and business drinking water systems.

National issues at the local level
In addition to running Falsken Water with a hands-on approach, Falsken is also one of the newest board members of the Pacific Water Quality Association (PWQA).

“I’m still getting my feet wet at this point, but I’m really eager to point the association into a new direction,” he said. Specifically, Falsken hopes that PWQA will begin to take a more active role in marketing itself and its activities to the general public. In many cases, the association is the place where customers turn after they have had a bad experience with a water dealer who is not a PWQA member, rather than the place they should start to find a reliable one.

“One of the things that has made (Falsken Water) so successful is our commitment to servicing systems that we didn’t install in the first place. In this state, you have a whole lot of unlicensed contractors and a lot of dealers who make the original sale, then disappear. They are not the ones who are PWQA members, they are not the long-term, reputable businesses that most of us are, but they make our work more difficult and it adversely affects the water treatment industry’s image as a whole,” Falsken said.

To that end, Falsken hopes to guide the association toward more consumer outreach, including more educational programs to foster trust in dealers that will help drive consumers to PWQA member-dealers.
“We have a whole lot of issues right now that are affecting the way in which individual dealers do business,” Falsken said. “PWQA has been out in front of a lot of these things and I want to be able to help be a part of the solutions.”

As a result, Falsken got involved with the Inland Empire Utility Agency’s Salinity Reduction Project after the utility approached PWQA for assistance. The project, a research program developed by graduate students at Claremont College, has been exploring ways for IEUA to reduce excess saline discharges by partnering with individual dealers to update, retool and replace old softeners that are less efficient than newer models and may be discharging higher-than-necessary amounts of salt into the waste stream.

“Honestly, the project is still ongoing and we have high hopes for it,” Falsken said.

“More than anything, it has shown that we (the water treatment industry and regulators) can work together.

When asked if he would like to eventually serve on the national WQA board, Falsken only laughs.

“One day at a time please! At this point, my only focus is the issues affecting the water treatment industry served by the PWQA. But in fact, many of our issues here in California are national issues as well.”