This article is based on an education session presented by the author at WQA Aquatech USA 2005. The complete work is available exclusively online at www.wcponline.com

Abstract
Electrodeionization (EDI) is a separation process combining electrodialysis and conventional ion exchange; the resulting hybrid process entails zero regenerant chemicals. One benefit of this technology includes the elimination of secondary hazardous waste associated with the chemical regeneration of ion exchange tanks. For fundamentally the same reason that cation and anion units are cost-effectively replaced by reverse osmosis (RO) units, EDI units in many cases can cost-effectively replace mixed bed deionizers. RO and EDI technologies enjoy a symbiotic relationship with each contributing complimentary characteristics that enhance the performance of overall treatment process. EDI technology in combination with RO offers a chemical-free option for the removal of ionic impurities from raw water. Industrial scale EDI devices are available in two major configurations: plate-and-frame or spiral wound. A new, more advanced Spiral Wound Electrodeioniza-tion (SWEDI) system was created about five years ago. The proven reliability of SWEDI modules in the high purity water generation application is substantiated by more than 40,000 gallons per minute (gpm) capacity of successful installations. These systems have now been in operation at several micro-electronics and power plants for over three years.

SWEDI is a robust and forgiving technology. SWEDI represents a breakthrough in desalination of RO permeate water as compared to plate-and-frame configuration. Associated benefits include leak-free operation up to 100 psig feed pressure because of the ease of sealing cylindrical pressure vessels; higher feed water hardness tolerance due to unique cross flow operation; ion exchange resins and/or membranes replacement; excellent electrical insulation due to the use of fiberglass reinforced polymer (FRP) housing; light module weight and simple system integration.

Introduction
The purification of aqueous streams by reducing the concentration of ionic impurities has been an area of considerable technical interest. Many techniques have been developed for this purpose. The most well known processes include electrodialysis, electrodeionization (EDI), liquid chromatography, membrane filtration and ion exchange. EDI is a separation process combining electrodialysis and conventional ion exchange; the resulting hybrid process does not entail regenerant chemicals. EDI technology has been reported in the literature since teh 1950s1, 2. The first patent for EDI was granted to a Dutch company in 19573. A patent for the purification of acetone with EDI was also granted to Kollsman in 19574. For fundamentally the same reason that cation and anion units are cost-effectively replaced by RO units, EDI units in many cases can cost-effectively supplant mixed bed deionizers5. EDI process is preferred in many systems primarily because of the environmental benefit of not requiring hazardous regenerant chemicals and inherent superiority of a continuous process over a batch process6. Although it may be possible to regenerate mixed bed resins using regenerants of high purity to achieve quality of water required even in electronics industry, this is inept due to the cost of producing and maintaining ultrapure regenerant. Additionally, it is critically important for mixed bed deionizer operation that the resins settle properly and the division between them occurs at the middle collector. Furthermore, the particle size range is limited by the separation requirement. The separation occurs because of the difference in the density of the two types of resin. The cation resin, being heavier, settles on the bottom, while the anion resin, being lighter, settles on top of the cation resin. The degree of separation can be determined using the terminal settling velocities (TSV) of the cation and anion resins respectively. The TSV is calculated using Stokes’ Law7:

In the case of regenerable mixed beds, it is essential that distinct separation of cation and anion resins occurs upon backwashing to assure complete regeneration of the resins and avoid contamination by the other regenerant. However, the very nature of a regenerable mixed bed requires compromise: the resins must be able to separate for regeneration and to remain intimately mixed during exhaustion8. Obviously these are  contradictory requirements. If cation resin remains in the anion zone, it will absorb sodium from the caustic regenerant. Conversely, anion resin remaining in the cation zone will attract either sulphate or chloride depending on whether sulphuric or hydrochloric acid regenerant is used for the regeneration of cation resins. Consequently, EDI systems provide a technically superior alternative in a cost-effective manner.

One key factor stimulating the EDI market growth is the desire to move to a water treatment approach that consumes fewer chemicals. A main benefit of the EDI system is the elimination of the need for on-site bulk storage of concentrated acid and caustic regenerants and associated operator exposure. Moreover, no hazardous waste stream is generated by this technology. In combination with RO, EDI provides a continuous, chemical-free system. On the other hand, purifying water through regenerated resin beds may lead to organic release onto the downstream treatment steps. When newly regenerated resin beds are installed, high total organic carbon (TOC) leakage may occur. It is interesting to note that EDI systems can readily remove charged organics9. Moreover, EDI systems use a continuous process, which does not require any redundancy like the conventional mixed bed deionizers. The main consumable in EDI is electricity. The electrical cost of running an EDI system is usually between 0.5 to 3.0 kW-h/1,000 gallons of product water, depending on feedwater quality and product water specifications10. Recent developments in EDI technology have resulted in significant cost reductions arising from an expandable, modular system approach built upon a base module. EDI systems require minimal civil works for installation. 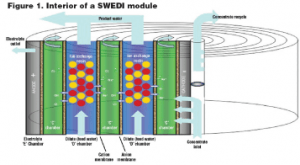 Higher conductivity in the concentrate stream accomplished by concentrate recirculation and occasional brine injection in the concentrate stream facilitates the transfer of current while back-diffusion can limit effluent quality. Consequently, a certain percentage of the concentrate flow must go to the drain. The increase in the electric current flow due to higher electrical conductivity of the concentrate water lessens the power consumption of the device because the EDI module resistance and applied voltage decreases as a result. Further improvement in the power economy was accomplished by passing the current through a series of cell pairs with electrodes only at the terminal points of the series. A cell pair consists of a cation membrane, spacing material through which the feed and the treated water flows in the diluting chamber, an anion membrane and the spacing material through which the concentrate water flows. Consequently, the loss of energy at the electrodes per equivalent of salt removal from the RO permeate water will reduce to a minimum.

The current also splits water molecules into hydrogen and hydroxyl ions. The EDI systems operate in two different modes: Electrodeionization and Electroregeneration12. The system is working in the first mode when the feedwater salinity is high13. On the contrary, the system is working in the second mode when the feedwater salinity is very low due to the passage of strongly ionized species to the concentrating chamber in the upstream flow path. This allows a portion of the resins in the EDI to always be in the fully regenerated state. This will form a highly conductive path through the resin beads. Moreover, higher degree of regeneration of resin beads will reduce the leakage of all the ionic species including boron and silica.

Dr. Avijit Dey received his Ph.D. in chemical engineering from Jadavpur University, Calcutta, India. He is currently Technical Manager at Omexell Inc., a research and development, design, engineering manufacturer specializing in Integrated Membrane Technology (IMT) equipment used in the process of water treatment. Omexell has been developing membrane technologies since 1998 and has now emerged as a leader in IMT with its patented spiral wound EDI and unique hollow fiber UF technologies. Dey can be reached at (713) 973-9731 or via email at info@omexell.com