Coca-Cola North America has accelerated the launch of its Dasani flavored water beverages to retailers with the introduction of 20-ounce plastic bottles in February and six-packs in March.

The wastewater treatment plant in Lititz, Penn., operated by Severn Trent Services, has been awarded the 2004 Plant Operation and Maintenance Excellence Award from the East Pennsylvania Water Pollution Control Operators Association. The company also announced it is cutting 350 jobs to create revenue for investment in services. The location of the job cuts was not disclosed.

The Great Lakes Declaration to protect the watershed for future development has been signed by the U.S. EPA and a variety of municipalities and tribal leaders in the area.

The Ohio Water Quality Association has awarded Bill Prior, one of the founders of Kinetico, with its first Industry Excellence Award.

Hindustan Coca-Cola Beverages Company is challenging an Indian high court ban on the use of colored packaging for mineral water. Coke has been bottling the water in a jar with a blue tinge.

Zenith International is reporting that the European POU drinking water industry has experienced growth of about 30 percent annually since 1999. The industry now accounts for over 10 percent of total cooler placements in Europe and is continuing to gain share from bottled water coolers.

The Danish pump manufacturer Grundfos Company has acquired The Alldos Group. The financial details of the acquisition were not disclosed.

Danone poised to drop water business
Groupe Danone announced €600 million (more than $770 million US) write-off for some of its U.S. and European water businesses and there is speculation that the company will fold its water business in the coming year, online business journal The Motley Fool reports. The company’s net income has slid 62 percent since last year. At present, the company is involved in joint ventures in the U.S. and Europe to provide home- and office-delivered bottled water, as well as a separate venture with Coca-Cola for products such as Evian. While the company hasn’t yet announced its longterm plans for their water business, management indicated that it will have more decisive plans by the end of the second quarter of 2005.

EPS budget cut six percent
The Bush administration’s proposed 2006 budget includes cutting EPA funding by about six percent to $7.57 billion annually. Most of the reduction comes from a revolving fund that states use to upgrade sewage and septic systems and storm-water run-off projects. Funding for that source would fall more than 33 percent under the proposed budgets, however, it would hold steady a separate $850 million states’ fund for clean drinking water, according to Reuters.

Fluoride may harm pets
Legislators in Oregon have revived the debate over the safety of fluoride in municipal water with a proposed bill that would require the addition for all cities in the state with more than 10,000 people. The cause of the stir is the impact the measure might have on pets drinking fluoridated water. Critics cite a barrage of studies that show the chemical can accumulate in animals’ brains and exposure can alter mental behavior much like known neurotoxins. 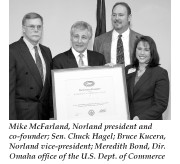 Sen. Chuck Hagel (R-NE) presented the President’s “E” Award for Excellence in Exporting to Lincoln-based Norland Int’l. Inc. Norland is the first Nebraska-based company since 1992 to receive the “E” Award, and only the 14th since the award’s introduction in 1961. On average, from 10 to 15 companies a year receive the award nationwide, an honor for  U.S. companies for their competitive achievements in world markets and for their role in increasing U.S. exports abroad. Norland’s international business makes up about 70 percent of the company’s sales.

Santa Fe kills water deal
The Santa Fe City Council voted unanimously to kill a water rights deal that would have seen billions of gallons annually piped from the Estancia Basin.  The deal would have cost $27 million for Santa Fe, for about 7,200 acre-feet in water rights from Sierra Waterworks. Widespread protests from neighboring Estancia Basin residents prompted the reversal.

IBWA unveils educational tool
The International Bottled Water Association and the United States Forest Service have created a new educational conservation tool to promote awareness of the importance of a healthy watershed, and other vital information about clean water sources. Water…Our Most Important Resource is an interactive, online presentation explaining the hydrological cycle, the importance of forested watersheds and environmental stewardship. It details how much water a variety of commercial and public enterprises use and outlines the steps needed to protect and sustain water resources. The presentation can be accessed on the Forest Service’s Cooperative Forestry website, www.fs.fed.us/spf/coop or on the IBWA website, www.bottledwater.org