Water Meters Past and Present

In Markham, Ontario (Canada), we find that the average family of four uses between 8,900 and 11,350 liters (approximately 2,496 gallons) of water each week… while in Tucson, Ariz. (USA) the range is 6,732 gallons at the low end and 12,716 at peak for that same family foursome. These numbers are gathered, as you may have guessed, via water meters, recording consumption to the nearest tenth of a cubic meter. Yet the majority of water being consumed around the world today is not metered… and it is un-metered in surprising places.

Water companies in the south east of England are currently discussing plans to install compulsory water meters in thousands of homes. Last year’s hot summer weather created an unprecedented winter drought, according to the BBC News. With supplies at an all-time low, Folkestone and Dover Water is considering an application to the government for ‘water scarce’ status, which would then allow the company to impose water meters on all the households it serves.

The very choice of the word impose says it all: that instituting a cost for this most precious of resources, based on actual consumption, is somehow extraordinary. How did that mindset occur? And why did that attitude happen at the faucet and not at the gas pump? 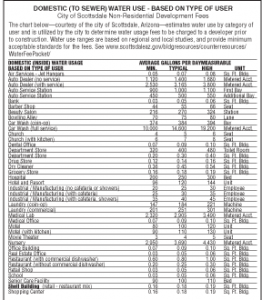 Meters produce water conservation whenever they are installed. England’s South East Water Company says the average unmetered bill for a residential household was €182 for a year’s service before metering, compared to €156 for the average metered bill.

While the seven companies covering England’s south east region decide how to proceed, they are urging customers to use water sparingly; however, thousands of new homes are to be constructed in the region over the next few years. Average rainfall in Kent today is 25 percent less than at the turn of the last century. Metering seems the obvious choice to meet this growing demand.

Is this aversion to water metering unique to the British Isles? Hardly. Water management policies in the Middle East have not focused on personal use; industry and agriculture there have been the sectors on which infrastructure, metering and regulation are based. Water in this region is pumped from local wells or desalinated at the coasts. In Israel, different well networks provide varying grades of water (some crops do well in saline water—dates, for example). The Israeli city of Eilat has the highest domestic water consumption in the country: 200 cubic meters per capita, despite metering, which implies that the cost is not set at the true value of the water. Worldwide, water is not charged for at its true value.

Here in the United States, Stanford Water (Stanford University’s Utilities Division) reads meters in cubic feet, multiplies by 7.48 to determine the number of gallons used, divides the number of gallons by 1,000 and then multiples that number by $3.25 to come up with the amount owed. Since 1987, 1,300 meters have been installed in buildings, irrigation services and main lines to measure (and charge for) water consumption. Average annual potable water use on the campus is approximately 900 million gallons (3,070 acre-feet of water per year). While there have been a number of advances (more on those next month, when we speak with Badger’s Richard Meeusen), the simplest type uses straight-reading dials, displaying water use much the same way a car’s odometer displays miles traveled.

In Australia, the Queensland Gov-ernment’s Department of Natural Resources, Mines and Energy has developed procedures and specifications to ensure that all new meters conform to departmental requirements and has mandated the replacement of existing meters to conform to those new requirements. One criteria is that the meter should be of the type generally used in a given area, to avoid a proliferation of meter types and spare part requirements.

There are two main categories of meters: mechanical and non-mechanical. The former include propeller actuated, paddlewheel and turbine meters; the latter, ultrasonic and electromagnetic meters.

Mechanical meters have an impeller—a propeller driven by the flow of water—or a paddle or a turbine. Mounted in the run of the pipe, it is mechanically connected (using couplings and gears) to an output device—that’s the analog or digital display where you can view your actual use. When water flows, it turns the impeller/paddle/turbine, which causes gear wheels to rotate the dial on the output device, which indicates the flow rate or the cumulative flow.

Electro-mechanical meters also have an impeller mounted in the center of the pipe, driven by the flow of water. An electronic signal is generated by magnets in the tips of that impeller which is received by sensors in the main body. The frequency of that signal is measured and converted to the flow rate using electronics.

There are two types of ultrasonic meters, Doppler and transit time. Doppler meters measure the frequency of acoustic signals that are sent through the water from a transducer head. The signals are reflected back to the transducer head from moving particles and air bubbles in the water. The difference in the frequency of signals sent and received is measured and converted into the flow rate.

Both types of meters have electronic modules that display the flow rate as well as the cumulative flow, which allows the display to be remotely mounted.

Electromagnetic meters operate by creating a magnetic field across the water flow, which acts as an electrical conductor, inducing an electrical voltage. The voltage, measured by electrodes in the meter body, is proportional to the mean velocity of the water, which is then coverted to the flow rate. The display modules on electromagnetic meters show flow rates and cumulative flows and can also be remotely mounted.

Dataloggers and telemetry are the two major advances in recording and retrieval equipment that are providing more comprehensive water use information from meters. Accurate, real-time data will help water utilities to better serve customers, whether residential, commercial or industrial.

A datalogger is a low power device, designed to collect readings from a variety of outputs in remote or unattended locations. It has a built-in clock that timestamps the data entry, and can store data at selectable time periods or events. Whether they are powered internally or by an external power source, dataloggers have a low power draw. Communications ports allow for the retrieval of the data in numerous ways: on site, directly into a Palm or laptop computer, or via telemetry to a central data storage facility. Transmissions between dataloggers and computers via modem are automatically error-checked, and available in many different formats (from public telephone networks to satellites and everything in between).

All that technology marching forward doesn’t mean every water system is adopting meters today (or even tomorrow). It is noteworthy, however, that every investor-owned water utility uses meters here in the U.S. Can the rest be far behind?