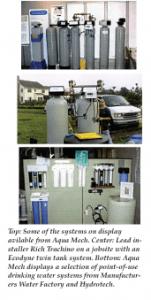 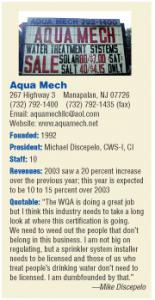 Quotable: “The WQA is doing a great job but I think this industry needs to take a long look at where this certification is going. We need to weed out the people that don’t belong in this business. I am not big on regulating, but a sprinkler system installer needs to be licensed and those of us who treat people’s drinking water don’t need to be licensed. I am dumbfounded by that.”
—Mike Discepelo

Mike Discepelo is in the market for some prime real estate. No, he’s not looking to get into a larger house with a swimming pool though, as he’ll tell you, he works on enough of them that it’s crossed his mind. Rather, as president of Aqua Mech, he needs a new office building to at least meet the storage needs of his water treatment company. After four years, Aqua Mech has finally outgrown its 2,000-square-foot facility.

Unfortunately for Discepelo, his company’s headquarters is based in Manalapan, N.J., a predominantly upper-class community of 50,000 residents located about 40 miles outside of New York City. Hence, values for property of any kind are at a premium. Still, this fact doesn’t deter him. Perhaps it’s because revenues for the 12-year-old company have experienced double-digit growth for the last couple of years. 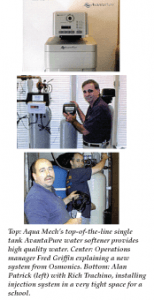 Maximum exposure
Currently, Aqua Mech is located at the Route 33 corridor, which is smack in the middle of the company’s service area. “We are busting at the seams,” Discepelo says.” There’s a storage capacity problem because it is too small. “We’re looking to purchase in an area that’s costly because I’m looking for the exposure.” By exposure, he means highway frontage land, which creates constant visibility and an emphasis on walk-in business.

Like Manalapan, Aqua Mech is also “growing by leaps and bounds,” he says. The way 45-year-old Discepelo sees it, the time to strike is now. “We are in a position financially to move ahead and dig our roots deeper in an area where we feel comfortable.”

When Discepelo first opened Aqua Mech, farmland predominated  Manala-pan’s landscape. Those days are long gone as tractors and John Deere equipment have been replaced by new housing developments featuring “mini-mansions,” whose owners worry about aesthetic things like their sidewalks being stained. “People are protecting their investments,” he says matter-of-factly.

Manalapan has welcomed prosperity with an enthusiastic embrace of growth. That’s reflected in Aqua Mech’s operations: of the company’s 85 percent residential business, Discepelo estimates 15 percent of that is new construction. To solidify his position, he has a healthy rapport with area homebuilders, which helps develop that sector of his business.

Going to the well
Aqua Mech’s equipment offerings are geared toward what 90 percent of their local customers need for their main source of water—private wells. Aside from high iron levels, this means Discepelo carries a selection of chlorine injection systems, carbon filtration, arsenic remediation and pH correction units.

Above all, he says the company has gained quite the reputation for twin-tank systems. In fact, he claims, Aqua Mech is one of the largest suppliers of such systems on the East Coast. Discepelo is at a loss to explain increasing demand for these systems but notes that “we sell them on the premise of iron remediation not only for the house but for sprinklers.” Manufacturers who provide Aqua Mech (an AvantaPure dealer) its equipment include Ecodyne and Fleck while its three reverse osmosis units are Hydrotech, Water Factory and a generic unit.

“We do a lot of different things out there,” he noted, and is preparing to venture into virgin territory. “We’re looking to diversify in several areas and one of them happens to be bottled water.” Here, he catches himself and professes caution is necessary because of the competitive nature of the niche.

“I would get my feet wet to see what the market was going to bear but, yes, I think this is something that we really need to jump into because it’s a booming business,” he says. “If my competitors are doing bottled water, they’re only dabbling in it. There’s a niche for it and I want to fill it.” Later, he makes it clear that “bottled water will be big for us, not so much for the quality, but for the convenience.”

Where POU is #1
Until then, he’ll have to enjoy the success of the fastest growing segment of his business—point-of-use (POU) systems. One cause for this growth, he says, has been the new federal limit for arsenic set at 10 parts per billion, which is a double-edged sword. The good thing is that POU is exploding; the bad thing is that there are “unscrupulous” people who seize the opportunity to use questionable business tactics that hurt business for the more reputable players, Discepelo says.

“They (non-certified dealers) have become more prevalent in the last five to seven years,” he says. He can think of five companies that have sprung up in the last three years. When meeting with a potential customer, Discepelo emphasizes his membership in the Eastern Water Quality Association (EWQA) and the national WQA.

Even without the unethical types, companies like Aqua Mech feel the pinch all the time to stay on top of their game. New Jersey is a highly competitive market and works the hard sell as well as any other state. “It is a dog-eat-dog area,” Discepelo says. “People do whatever they can to make a sale and that’s a philosophy that I just cannot follow. I’ve lost some deals because I’m not the least expensive, but I have to hold my ground because we provide the quality service.”

Undoing the damage
An issue often overlooked by the industry, he says, is that customers receive conflicting information from water treatment dealers. Frequently, Discepelo feels it’s his obligation to re-educate the homeowner on what product or system is available and the rationale behind the selection: “When I go into a customer’s home and I tell them that we need to start all over again because the prior equipment was installed wrong, that is not a good beginning for a customer that I want to get.”

So, how does Discepelo combat the tactics used by his non-certified competitors? Right now, by using the Yellow Pages, mailers, fliers and a multitude of referrals. The company’s website is a tool that’s currently under-utilized, but he says that will change eventually. For now, it’s an Internet presence and not much else. “A lot of work needs to be done on that website,” he says. “Do I see being able to sell things down the road from the site? Absolutely, but not right now.”

With 5,000 accounts on AquaMech’s customer rolls, Discepelo knows he could cut a nice slice of pie in Gotham if he was so inclined. But as the saying goes, “been there, done that.” At one time, he made the New York City market a top priority. “It was too expensive and too political, and I’ll leave it at that,” he says. A shortage of qualified personnel compounded the problems.

Planting roots
Finding good help can be partly attributed to the fact not many water treatment professionals have progressed as steadily and over such a long period of time as Discepelo. He began in the water treatment industry in 1980 and, over the next 12 years, worked at two different companies. At the first, he started as an installer and moved up to sales manager. At his next stop, he entered as an installer/technician and worked up to the position of vice president of operations. Then, one day, he found out the company was being sold.

“I felt at that point that I’d worked for enough people and decided to go out on my own,” he recalls. “It was a very big step for me; I had just got married… A lot of thought went into it and it was a big gamble. It was very scary.” It took about five years before Discepelo felt comfortable with the business and it started to flourish.

If the last two years are any indication, the future seems more assured than ever for Aqua Mech. Consolidation or not, the presence of bigger players, the big box effect…none of it can take away what Discepelo has used for his business’ foundation—service. He strongly believes this will carry him through good times and bad. “If I can’t make the sale, then I’m going to make the service end of it, and keep the customer forever. I look at residual sales,” he says.

Conclusion
Discepelo foresees refrigerators being equipped with more elaborate filtration units, the high purity industry getting more involved with household appliances, and dishwashers with filtration devices. This means that many new opportunities will arise for dealers to make these developments work for them in their offerings. And if anyone will capitalize on such amenities, it will be the man in search of highway property who services a high income community with a healthy economy.