DWTU Purifier Claims: A Dialog about Microbial Standards by Two Researchers, Part 1 of 2

Gary Hatch and “Regu” P. Regunathan met to review the microbiological standards currently in existence compared to those being proposed for adoption. Hatch is the chairman of the Mechanical Device Sub-Task Group of the microbiological standard development effort at NSF International’s Joint Committee on Drinking Water Treatment Units (DWTUs). Regunathan serves as a member of several sub-task groups of this effort. The following is based on their recent conversation—The editors 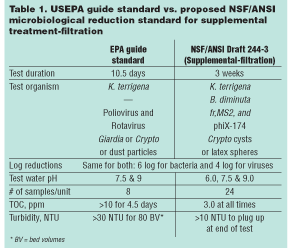 Gary: Regu, we need to first review what’s currently in existence at the U.S. Environmental Protection Agency (USEPA). Did you not serve as a member of the task force that developed the USEPA “Guide Standard and Protocol for Testing Microbiological Water Purifiers”?

Regu: Yes, Gary, I was one of the 17 members involved in that task. The group included 14 members from different related branches of the U.S. Government, one from Health Canada, one from academia, and myself representing the DWTU industry and the Water Quality Association (WQA). Obviously, there was a heavy presence of regulatory personnel! Chuck Gerba, of the University of Arizona, known to many in our industry because of his work in testing DWTUs, was the only professor in this group. Among the regulators there were other well known microbiologists, including Ed Geldreich and Don Reasoner.

Gary: Even though I’m fairly familiar with this “Guide,” let me ask you a few questions for the sake of informing our readers. When exactly did this task group carry this out?

Regu: We started in 1984 and completed our work in about two years, but it was released to the public in 1987 after external review. By the way, no further review of this document has taken place during the last 17 years, even though such an ongoing continuity was specifically called for in the document itself. The USEPA has been willing to consider variations of the protocol on a case-by-case basis.

Gary: What types of units are covered by this “Guide”? What is the general scope and purpose?

Regu: Let me answer your second question first. The Guide is to facilitate the proper application of point-of-use (POU) units for treating water from contaminated wells, lakes, springs, or streams in the United States or abroad. It specifically cautions that this protocol isn’t meant to be used for treating wastewater to microbiologically potable water. It also specifically excludes terrorist-induced actions.

Only three types of devices were covered by this task group:

Gary: What types of test waters were indicated in the protocol?

Regu: There’s a “General Test Water” for use in all tests. This water had specifications of pH, total dissolved solids (TDS), total organic carbon (TOC), and turbidity measured as NTU—nephelometric turbidity units—in low or normal range at ambient temperature. But there were several variations of worst-case test waters for use in testing each type of devices.

Gary: I would like to limit our dialog to just the mechanical units for now.

Regu: Good idea! The mechanical filter units were to be tested at 60 pounds per square inch (psi) inlet pressure for a duration of 10.5 days. General Test Water is supposed to be used during the first six days and the worst-case “Test Water (No.3)” without the high turbidity levels was to be used during the remaining 4.5 days of testing. Test Water No.3 with high turbidity of >30 NTU has to be introduced only during two “ON” cycles for at least 10 bed volumes during each sampling event. There are eight sampling events during the test period.

Gary: That is interesting. Each unit sees this high turbidity water only for a total of about 80 bed volumes during this test. Is that correct? What is the composition of this worst-case water?

Regu: Yes. That’s correct. Well, this Test Water No.3 has to have these characteristics:

Turbidity is supposed to be kept at below 5 NTU even during the last 4.5 days so that the unit can be maintained without getting plugged up completely before the end of the test.

Gary: Why such a mix?

Regu: While there was not much data in this area, the general feeling was that high pH, high TOC, higher TDS and low water temperature will provide a higher challenge to the adsorption of viruses on the surface of ceramic or other mechanical filters. There was a difference of opinion regarding use of high turbidity levels. Some felt it would actually assist better removals if high dirt load were present in the influent waters. Others, while agreeing with that possibility, felt it’s needed to stress the filters and create failures. Also it was felt such high turbidity levels may occur in surface waters after heavy rainfall, and these types of units may be used at that time. There was, however, concern about high dirt levels plugging up filters too quickly. That’s why it was agreed as a compromise to have such high turbidity be present only during sampling times, particularly during the last 4.5 days of testing with Test Water No.3.
By the way, it was necessary to clean the ceramic filters twice during the test to simulate actual usage in the field.

Gary: What about the test organisms?

Regu: The following were the selected organisms:

Reduction of bacteria levels has to be more than 6 logs (>99.9999 percent), virus levels more than 4 logs (>99.99 percent), and cysts or particles more than 3 logs (>99.9 percent) for a unit to be considered to have passed the test. Ten percent of individual sample pairs are allowed to be one or half an order of magnitude lower than these log levels as long as the mean value passes the above requirements.

By the way, influent bacteria levels have to be maintained as shown throughout the test, but the viruses and the cysts need to be added only during the two “ON” cycles around each sampling event along with the increase in turbidity levels at those times.

Gary: All of this is interesting and a little confusing. Clearly, the group was trying to come up with some kind of simulation, but without much field data to draw from. You stated earlier that this protocol hasn’t been reviewed after 1987—all the more reason for our effort at NSF to come up with new standards and accompanying protocols.

Regu: Let’s chat about that. Even though I’m aware of most facts involved, let me ask the questions to clarify the situation. Who is involved in this effort?

Gary: The whole effort of standard development is managed by the Joint Committee (JC), which has members from industry, the regulatory field, and user community in an equal ratio. They set up task forces that actually do the writing and the legwork, which then is reviewed and balloted by the JC for approval and later by the Council of Public Health Consultants (CPHC) at NSF.

Regu: What is the name of the task group you’re currently chairing? What exactly are your tasks?

Gary: Our group is the Mechanical Filtration Task Group, which is just one of the task groups working on several microbiological reduction standards and is part of an overall Microbiological Reduction Standards Development Committee. It consists of mostly industry members who have expertise in microbiology, chemistry, engineering and water filtration. The initial responsibility of our task group is to develop a test protocol for testing POU and point-of-entry (POE) filtration devices that utilize very fine filtration as the primary removal mechanism for mechanically filtering out viruses, bacteria and cysts from drinking water deemed to be microbiologically safe.

Regu: Wait a minute! What do you mean “microbiologically safe”? Isn’t this a “purifier” standard?
Gary: Yes, but our initial effort is to develop first a standard that allows for testing devices that provide “supplemental” treatment of municipally treated tap water or water that’s deemed safe by routine microbiological testing such as well water. After we complete this standard, we plan on making changes to the protocol to create more stringent challenge conditions. We envision this more stringent protocol to be a “purifier” standard similar to the current ceramic candle test protocol in the “EPA Guide Standard” you described previously. Our ultimate hope is that USEPA would adopt the new standard for reviewing registrations for pesticides, or performance related to pesticidal devices.

Gary: Exactly! This is the strategy initially developed by the overall Microbiological Reduction Standards Development Committee, which oversees this task group.

Regu: What was the reasoning behind the supplemental treatment approach?

Gary: Well, it’s known that occasionally municipal systems have “excursions” of microbiological contamination, such as during heavy rains, flooding, broken lines, during periods of low pressure and drought, or because of faulty chlorination or pump equipment. We all have heard of a boil water advisory. But by the time they’re issued, the potentially contaminated water usually already has entered the home and consumers are exposed. This is the scenario where a supplemental DWTU—or POU/POE device already in place—would be of great benefit to consumers. Consumers can also be protected from any possibility of endemic (low-level) disease potential in a water system as shown in a Canadian study not too long ago. Even though there’s some controversy associated with this study, such potential cannot be completely ruled out.

Regu: But should the consumer keep using the unit during the boil water notice?

Gary: No! The task group was given specific direction by the JC not to allow continued use of the device during a notice since it’s for “supplemental” treatment, not for treatment of water of “unknown quality.” So, according to the proposed standard, once the notice is issued by the utility, the user should stop using the unit and follow directions given for the boil water advisory or use some other source of safe water such as bottled water. Once the “all clear” is given, the unit should be serviced and sanitized and put back into use to provide supplemental protection if there’s another similar incident.

Regu: Sounds like a very good approach. We’ll continue this discussion in Part 2 of this series.

About the authors
Gary L. Hatch, Ph.D., is director of research and development for Pentair/Plymouth Products in Sheboygan, Wis., manufacturer of Pentek™ brand water filtration products. He’s responsible for new product R&D for residential and commercial POU/POE markets. Hatch graduated from Kansas State University with a doctorate degree in analytical-inorganic chemistry and has been actively involved in water treatment for the past 30 years. He can be reached at (920) 451-9353, (920) 451-9384 (fax), email: ghatch@plymouthwater.com or website: www.pentekfiltration.com

P. Regunathan, Ph.D., is president of ReguNathan & Associates Inc. He works as a consultant to NSF International and the Water Quality Association in addition to other clients. He was formerly senior vice president of Science & Technology at Culligan International as well as president of Everpure Inc. He received his doctorate degree in environmental engineering from Iowa State University and worked in the POU/POE industry for 35 years. He can be reached at (630) 653-0387 or email: regu5@yahoo.com