By Eugen Nisipeanu and Muhammad Sami

Summary: This article introduces CFD—computational fluid dynamics—which allows users to, among other things, calculate UV energy used by various water qualities and disinfection efficiencies. In addition, a greater number of designs can be evaluated than can be tallied using other methods.

Computer simulation can substantially improve the design of ultraviolet (UV) technology used to disinfect water. In UV disinfection design, bacteria and viruses must flow in close proximity to a UV lamp for a sufficient period of time to greatly damage DNA, which adsorbs UV radiation. Without a method to determine the effectiveness of a proposed UV system design, engineers have often been forced to over-design systems to ensure their ability to meet regulatory requirements, substantially increasing their cost.

Computational fluid dynamics (CFD) coupled with irradiance modeling can track trajectories of thousands of individual microorganisms and calculate their detailed motions and resultant UV dose—or fluence. CFD provides more detailed information than can be obtained from physical tests such as flow patterns through the disinfection system and UV dose received by various sections of the population of microorganisms. A key advantage of CFD is that engineers can evaluate alternative designs in much less time and at a lower cost than the traditional approach without having to build a physical prototype. This makes it possible to optimize design of the UV system and, in many cases, eliminates short-circuiting and dead zones that can result in inefficient use of power and reduced contact time. Using CFD in this manner, the overall cost of a system can usually be substantially reduced while still meeting all regulatory requirements.

All about regulations
To prevent transmission of waterborne diseases, disinfection of water is controlled by stringent regulations. These regulations typically specify water treatment processes, contaminant removals, final effluent quality and disinfection criteria. Chlorine, the traditional disinfection method, provides reliable results but presents environmental concerns and safety issues. One major concern is the formation of chlorinated hydrocarbons such as trihalo-methanes and organic halides. In addition, new safety regulations are driving up the cost of handling, transporting and storing chlorine. Regulations designed to address aquatic toxicity also require dechlorination of water before discharge, which further increases costs.

UV disinfection can potentially address all of these concerns. Recent findings have proven UV is effective in inactivating disease-causing pathogens found in drinking water that are resistant to conventional chemical disinfection. UV doesn’t alter the taste, color or odor of water, and doesn’t produce any harmful by-products. Over the past two decades, UV radiation has become an established disinfection technology. An extensive pilot and full-scale study sponsored by the state of California established that UV treatment generated no residual effluent toxicity and no significant by-product formation. It also showed that UV treatment was more effective than chlorination in the treatment of viruses.

Presently, there are more than 2,000 installations in the United States where UV radiation is used to disinfect primary, second, and filtered tertiary effluents. Designing these systems has become a major challenge due to the difficulty of ensuring efficient flows through the disinfection tank that will provide a relatively uniform dose to each microorganism. The traditional approach is to simply build a prototype disinfection system and perform tests designed to measure its efficiency with real microorganisms. But with an infinite number of possible designs and the high cost and time involved in the testing of each one, there’s a strong tendency to substantially over-design the disinfection unit to ensure that early tests provide positive results. The problem with this approach is the unit will probably cost far more than necessary to build and operate. For example, it’s difficult to accurately determine flow through a prototype, so it’s often impossible to detect short-circuiting. This phenomenon causes bacteria to move quickly through the unit and requires a high level of UV radiation to meet regulatory requirements, which drives up equipment and operating costs.

Improving design process
A new approach to designing UV disinfection systems has the potential to substantially improve the design process and reduce the cost of building and operating UV disinfection systems. The basic idea is to use CFD to simulate movement of microorganisms through the disinfection system and calculate their exposure time to UV light. This approach makes it possible to quickly determine effectiveness of any proposed design and to scale-up existing technology to large-scale systems, i.e., >50 million gallons a day (mgd). A CFD simulation provides fluid velocity, pressure, temperature and other variables, as appropriate, throughout the solution domain for problems with complex geometries and boundary conditions. As part of the analysis, an engineer may change the geometry of the system or boundary conditions and observe the effect of the changes on fluid flow patterns or distributions of other variables. The path an organism takes in the reactor is a key determinant in the amount of UV radiation exposure. The reactor can then be designed to eliminate short-circuiting and dead zones that can result in inefficient use of power and reduced contact time.

The position of microorganisms in the fluid can be tracked in one of two ways. One, using the particle tracking method, organisms are treated as discrete, micron-sized particles (see Figures 1-4). The flow and radiation fields are calculated to convergence. Computing the flow and radiation field is an iterative process starting from an initial guess. When convergence is reached, the solution doesn’t change iterating further. Particle tracking is performed in the post-processing mode. This part of the calculation is done after the flow and radiation field is computed. All the operations done after the flow solution was computed are part of post-processing. It can be contour plots, x-y plots, pathlines, etc., and their purpose is to present results in a certain format. Particle tracking is similar to these operations because it’s based on the existing flow field.

A user-defined function is used to calculate the UV dose along each particle track. The amount of UV dose accumulated by each particle is analyzed using statistical methods to assess the performance of the UV system. Another approach uses transport equations to model the bacteria as if they were a chemical species or compound. The software tracks concentration of the species through the domain and a user-defined function is used to model the destruction of microorganisms based on chemical composition of the organism and radiation field intensity (see Figure 5). 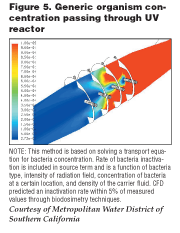 Developing the radiation model
The radiation model also plays a critical role in the simulation. The optimum wavelength to effectively inactivate microorganisms is in the range of 250 to 270 nanometers (nm). The intensity of the radiation emitted by the lamp is reduced as the distance from it increases ( 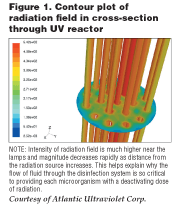 see Figure 1). Disinfection efficiency depends on lamp power and residence time of the bacteria in the water around the lamps. Ideally, a disinfection system should have uniform flow past the lamps with enough radial mixing to maximize exposure to UV radiation. The UV light-emitting tubes typically span the reactor zone. Baffles—obstructions forcing the flow to follow a certain path—placed in the UV reactor can be used to provide a more directed flow at the lamps.

Fluent software has a number of radiation models, which can be coupled with flow simulation to model a UV system. One of the most often used is the discrete ordinates (DO) radiation model. This model offers the ability to incorporate reflection and shading effects, and a banded modeling option to differentiate effects of different wavelengths of UV light. It’s also possible to use other UV codes to calculate the radiation field and then import the radiation field onto the CFD grid using a proprietary user-defined function. The model can account for extinction of radiation in various wavelength bands. It is the user’s responsibility to set it up. 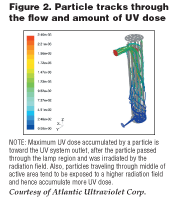 Recently, there have been numerous studies comparing certain DO model results with leading UV-specific software. In one such study, engineers at Metropolitan Water District (MWD) of Southern California compared a DO model with a UV-specific code, UVCalc. The DO model’s results were within 4 percent for the fluence calculation. After this validation study, the MWD compared its actual UV reactor measured data with the model’s simulation, and results were very comparable. A kill rate for different bacteria types, calculated from experiments, was compared to the kill rate derived from the computed UV dose (fluence). Results were within 1 to 4 percent depending on the radiation field intensity.

Conclusion
In conclusion, CFD makes it possible to compare multiple reactors with different geometries, hydraulic properties and levels of energy consumption using different levels of water quality, and compare the disinfection efficiencies. By giving engineers detailed information on performance of as many designs as they wish without the cost of prototyping and testing, CFD can help engineers optimize the design well before the prototype stage. This approach makes it possible to evaluate a much larger number of designs than in the past. As a result, engineers can optimize designs to a much higher level, eliminating short-circuiting, minimizing head losses, reducing energy consumption, and generally building a far more efficient disinfection system than is possible using experimental methods. The CFD approach has also been validated by other major water companies—such as Veolia Water, Maisons-Laffitte and Cedex—where CFD simulations have been compared to test results and found to provide excellent correlation with physical testing. 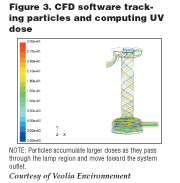 About the authors
Eugen Nisipeanu works for Fluent Inc., of Evanston, Ill., as a CFD engineer. He assists assigned customers working primarily in the nuclear power industry and water treatment in all aspects of their engineering flow analyses. Nisipeanu has a doctorate degree in mechanical engineering from Auburn University. He received his bachelor’s degree in power engineering from Politehnica University in Bucharest, Romania. 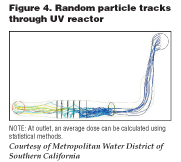 Muhammad Sami also works for Fluent Inc. as a CFD engineer with the same job capacity as Nisipeanu. He has a doctorate degree in mechanical engineering from Texas A&M University. His research was related to coal combustion and NOx emissions.