Summary: As the population of California has grown exponentially over the last several decades, the search for a new and economically doable water treatment system has heightened. The area in question involves southern California and, more specifically, Orange County. Through careful planning, an alternative has been found.

In an era when California’s freshwater supplies are strained for a variety of reasons, Virginia Grebbien knows part of the solution for arid Orange County is within her grasp. In fact, it’s now flowing into the Pacific Ocean.

“Nearly half of our water is imported, with the remainder drawn from a drought-impacted groundwater basin,” Grebbien said. “Purifying wastewater that would otherwise be lost to the ocean outfall is part of the solution to future water crises in an area with recurring droughts, and we have the history and expertise to make this new water purification project happen.”

Purified at the factory
OCWD is a national leader in purifying wastewater to drinking water standards for groundwater recharge, also referred to as indirect potable reuse. For more than 25 years, OCWD has produced clean, pure water that meets drinking water standards from highly treated wastewater at its Water Factory 21, a facility built to provide a barrier to seawater intrusion of Orange County’s vast groundwater basin.

“We are very proud of our long history in water purification,” said Denis Bilodeau, president of the OCWD Board of Directors. “Hundreds of water industry experts from around the world meet with OCWD staff annually to learn about the latest advances in water purification.”

Work has begun to replace Water Factory 21 and its lime clarification and reverse osmosis (RO)-based system with the Groundwater Replenishment (GWR) system. This project is a modern, $450 million membrane-based process that will utilize microfiltration, RO and ultraviolet (UV) light with hydrogen peroxide to purify wastewater to extremely high quality water.

Roughly half of the water from the GWR system will be injected into Orange County’s seawater barrier through 36 injection wells. The remaining water will be piped to spreading basins in Anaheim, Calif., where the water will take the natural path of rainwater as it filters through clay, sand and rock to the groundwater aquifer. The groundwater basin below Anaheim represents more than half of Orange County’s freshwater supply.

When completed in 2007, the GWR system will produce 72,000 acre-feet per year (23.4 billion gallons annually or 64 million gallons per day) of purified water, enough water to meet the needs of 140,000 families. Ultimately, it could supply twice that amount of water if it’s needed in the future, OCSD general manager Blake Anderson said. “It’s going to be the largest membrane wastewater reclamation plant in North America for indirect potable reuse… a model for water purification in the United Sates and around the globe,” he added.

Being redundant
The GWR system is a redundant approach that utilizes back-up systems and procedures of OCSD and OCWD from source control at the homes and businesses that generate wastewater to a water purification system that will produce water similar to bottled water for groundwater recharge facilities, OCWD project engineer Shivaji Deshmukh said.

“NDMA is one of the most difficult of the organics to remove because it’s found at the part-per-trillion level,” Deshmukh said. “So by addressing NDMA in treatment, we’re ensuring removal of many other contaminants.”

NDMA isn’t believed to be commercially manufactured in the United States, but it’s present as a by-product of manufacturing in many products such as tobacco smoke, meat, cheese, alcohol, canned fruit, soybean oil, plasticizers and lubricants. The GWR system removes NDMA with UV light and hydrogen peroxide, Deshmukh said.

Cleaner and consistent
Bruce Macler, national risk assessment expert for the USEPA’s Region 9 office, said the GWR system’s focus on NDMA, in combination with using the latest wastewater purification technology, will produce a product cleaner and more consistent than many surface water sources. He noted many surface water sources include municipal wastewater from upstream sources and aren’t treated to a degree that equals modern wastewater purification systems equip-ped with microfiltration, RO and UV.

“By and large, I don’t see anything that says this is worse than taking water out of an ambient source like the Colorado River,” Macler said. He further noted that, along with the National Water Research Institute, OCWD has been very proactive in collaborative research with the state of California for health concerns related to water purification. “They’ve pretty much looked at all angles and it’s to their credit, and the state’s credit, for doing everything possible in this field,” he said. 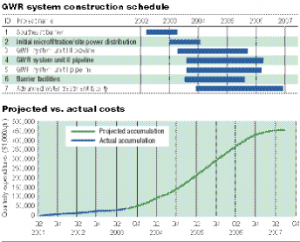 As part of the GWR system, OCSD will implement a new source control program under supervision of the Regional Water Quality Control Board based on California Department of Health Services requirements. As part of the district’s master plan, it will further convert its wastewater treatment process from a blend of primary and secondary to full secondary treatment at a cost of $400 million.  Primary wastewater treatment is a mechanical method for the removal of solid materials from wastewater, while secondary treatment is a biological process following primary treatment for removal of up to 95 percent of suspended, colloidal, and dissolved organic material.

Testing with microfiltration
Microfiltration is the first line in the purification for the wastewater to meet drinking water standards. Submersible microfilters from USFilter were selected following a competitive pilot-testing program consisting of three manufacturers. Each manufacturer met judging criteria of filtering out bacteria, protozoa and suspended solids to 0.2 micron (a human hair is 100-200 microns), yet USFilter won the $27 million contract based, in part, on a life cycle cost analysis, Deshmukh said.

The microfiltration system will include 17,784 modules divided among 19 racks. It’ll be capable of filtering 86 million gallons per day (mgd) of water. The recovery rate of the microfilters is roughly 90 percent, with the balance returned to OCSD for treatment. Sodium hypochlorite will be added to the water prior to microfiltration as a biofouling preventative, he said.

The planned RO unit for the GWR system will feature 15 trains of polyamid-based membranes, each capable of producing 5 mgd. With one of the 15 trains serving as backup, the system’s RO unit will produce 70 mgd. Sulfuric acid and a threshold inhibitor will be added to the water prior to RO to prevent scaling of the membranes. Competitive testing has been ongoing for eight years and OCWD anticipated awarding the contract this year, Deshmukh said.

Last step: UV
UV light with hydrogen peroxide is the final purification step and is aimed at disinfection and destruction of any organics present in the water following RO. Performance of the UV system—awarded to Trojan Technologies, of Ontario, Canada, following competitive pilot testing—is measured against the presence of NDMA and 1,4-dioxane as controlling constituents, Deshmukh said. 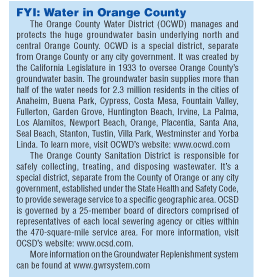 The UV system will include eight self-contained trains capable of processing a total of 70 mgd. Hydrogen peroxide is added to the water to create an advanced oxidation process. The project will represent a major contributor to satisfying the demands on agency water resources, expected to grow from the current 505,000 acre-feet (165 billion gallons) per year to 605,000 acre-feet (197 billion gallons) per year by 2020. More than 50 percent of the area’s water supply for 23 north and central Orange County communities is drawn from groundwater aquifers, with the remainder purchased from the Colorado River and California’s State Water Project.

Partial funding for the GWR system comes from $92.5 million in federal and state grants. Grants include a $30 million contribution from the California Department of Water Resources (DWR) from Proposition 13 funds. The GWR system grant represented the single largest DWR award from $91 million in Groundwater Storage Program funds available statewide. The GWR system has also received a $700,000 grant from the California Energy Commission because the cost to produce water locally requires half as much energy as importing to Orange County from Northern California.

Jenny Wedge, communications specialist, has worked for the Orange County Water District (OCWD) since 1999. With a bachelor’s degree in communications from California State University-Fullerton, she handles much of OCWD’s media relations, publishes a quarterly groundwater newsletter called Hydrospectives, and also manages a water conservation program designed to help Orange County hotels and restaurants conserve water and energy. She is also a member of the OCWD Groundwater Guardian Team helping to develop and promote water education programs throughout the county. Wedge can be reached at (714) 378-3228.