Getting a Handle on QMP’s Vidal 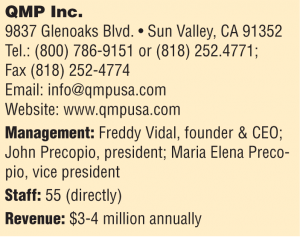 Anative of Bolivia, but a naturalized U.S. citizen, Freddy Vidal is proud to be an American. He’s even prouder his products are “Made in the USA.” In his mind—as well as those of his customers—this translates to high quality. That’s something to which Vidal has committed himself.

He came to the U.S. to be a commercial pilot, but later chose to study mechanical engineering at L.A. Valley College. Afterwards, he worked in a metal shop running advanced lathing equipment, then was hired by a current competitor in the faucets, fittings and diverter valves market. In 1994, he started his own operation, QMP Inc., with a partner and several of his own designs.

Today, QMP—which stands for Quality Metal Products—has 22 multi-spindle machines, 20 single-spindle machines and eight injection molding machines. Not only does it use CNC and CAD/CAM technology to do its own tooling and molds, but it also makes its own plastic tubing. In addition to faucets, fittings and diverter valves, the company is able to do elbows, housings, shower filters, countertop systems, undercounter systems, RO systems and UV systems—both components and complete-systems assembly. Newer products include a patented, mounted faucet with inline carbon block for the homebuilder market that was introduced at the WQA show in Las Vegas.

QMP employs 55 people directly. Indirectly, it also provides employment for 20 other people at IMP, a nearby metal plating/polishing operation invested in by Vidal. In addition, roughly 30 more work in Cochabamba, Bolivia, through his brother’s water treatment equipment distribution and service business, QMP de Bolivia. “When I go back home and see the sign, QMP, on a brand new building that he bought there, that makes me proud as well,” said Vidal.

Even with a stagnant economy, business is growing some 30 percent a year. And QMP—which started in 2,500 square feet—now occupies two buildings with about 38,000 square feet. That’s not to say there haven’t been any challenges. One early on prompted Vidal to switch partners, bringing his brother-in-law and sister into QMP—he knew financial issues; she knew sales—to gain better control of the business. And four years ago, he became a partner in another business to get better service in metal plating/polishing. He began producing his own tubing for the same reason. Thus, he believes strongly in family ties and doing things yourself if you want them done right.

Customers include EcoWater, Brita, GE, Pentair, CUNO, RO Ultratec, Sprite Industries, Rainshow’r, Home Depot… to name a few of QMP’s over 5,000 accounts. One of his biggest clients, a Japanese firm, has even boosted QMP to No. 2 in filter sales in that country. Half of sales are international with Japan accounting for 30 percent, and the balance spread across Bolivia, Venezuela, Australia, Turkey, Italy, etc. The U.S. market, though, is where QMP sees itself being anchored. Thus, he finds it disconcerting to see so many manufacturing jobs being lost overseas in recent years.

“The idea that we’ve always had is to help U.S. industry by keeping the manufacturing in the U.S… I’m really thankful to the U.S… I love this country. And I would like to see (it) back like the old days when there were a lot of manufacturers and a lot of work,” Vidal said.

That allegiance doesn’t necessarily translate to California, as he’s been considering moving to Nevada or Arizona because of high worker compensation taxes and other non-friendly business practices in the Golden State. Such measures made it difficult for him to be sympathetic to Gov. Gray Davis’ plight in the recall election there last month.

Click on the “Executive Q&A” button at www.wcponline.com for Vidal’s full interview.