Summary: Until recently, chlorine dioxide was relegated to only large-scale water treatment applications. With the introduction of a new technology, the biocide looks to make an impact on the residential market. Here are some of its advantages.

Chlorine dioxide is an extremely effective and powerful biocide used for decades to disinfect drinking water, industrial water and wastewater streams. Its use has drawbacks, however, particularly for smaller-scale applications. The chlorine dioxide molecule is inherently unstable, so it cannot be transported or stored. Rather, it must be produced onsite—on an as-needed basis—in dedicated chemical reactors. As a result, chlorine dioxide use has historically been restricted to relatively large-scale applications.

Recently, the development of a new delivery technology—which allows chlorine dioxide to be generated at the point of use in smaller quantities without special equipment—has opened the door for this potent biocide to be used in many smaller-scale sanitizing and deodorizing applications in consumer, industrial and municipal settings.

Chlorine dioxide offers a variety of safety and environmental advantages over chlorine and many other commonly used antimicrobial agents, and is four to seven times more effective as a biocide than chlorine at equivalent doses (see Table 1). A water-soluble gas, chlorine dioxide is typically dissolved in water.

Chlorine dioxide has been proven to kill a diverse array of bacteria, viruses, algae, fungi and protozoa. It works through oxidation while penetrating bacterial cell walls and reacting with vital amino acids in the cytoplasm of the cell to kill the organism–often in a matter of seconds. In addition, chlorine dioxide doesn’t produce halogenated by-products such as trihalomethanes (THMs), dioxins and haloacetic acids, that may be produced when free chlorine is used. These compounds are implicated as cancer-causing agents; thus, their presence in treated water is regulated worldwide.

Chlorine dioxide, on an equivalent dose basis, is more effective than chlorine. Microbial control typically occurs at concentrations as low as 0.1 parts per million (ppm). More important, chlorine dioxide maintains its efficacy over a wide pH range (from 1 to 10) while chlorine’s effectiveness is significantly reduced above neutral or basic pH.

For the past several decades, chlorine dioxide has been used as a more environmentally benign alternative to chlorine, particularly in large-scale municipal and industrial water and wastewater treatment systems. Moreover, chlorine dioxide is used as a bleaching and disinfecting agent in various pulp and paper, food and beverage, and electronics applications. Its use, however, has historically eluded smaller-scale operations until now.

Flexible delivery technology
In a conventional setup, chlorine dioxide is produced onsite via a chemical or electrochemical reaction involving either sodium chlorite or sodium chlorate with either chlorine or hydrochloric acid. While dedicated chemical generators provide precise delivery of chlorine dioxide for large-scale applications, they’re neither practical nor economically justified for many smaller-scale applications. 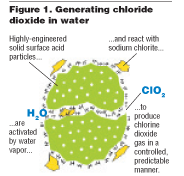 Now, thanks to the recent development of a new delivery technology for chlorine dioxide, smaller amounts of this potent biocide— from milligrams to kilogram quantities can now be produced precisely and economically at the point of use without need for a dedicated chemical reactor (see Figure 1). This opens the door for many smaller-scale uses such as emergency disinfection of drinking water and control of bacterial and fungal contaminants in cooling towers, water softeners, industrial water and wastewater streams.

The new technology delivers chlorine dioxide in a stable powder form. The powders feature proprietary activators that react with chlorite anions contained in the powders to generate chlorine dioxide (see Figure 2). Chlorine dioxide is generated only when the powders come into contact with water or are exposed to water vapor in ambient air. Water provides the reaction bridge between the chlorite salt and the activator, allowing generation of chlorine dioxide to proceed. Prior to exposure to water, the material can be stored in airtight containers and used when needed. 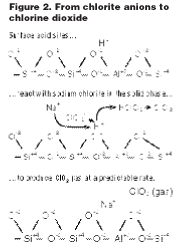 Two forms are available for solution applications—tablets and sachets (a small bag or packet containing powder). Both forms begin releasing chlorine dioxide immediately after coming into contact with water and continue releasing the biocide for up to four hours, depending on the formulation. Tablets or sachets can be custom formulated to deliver different levels of chlorine dioxide.

then diffuses from the tablets or sachets into the bulk solution (see Figure 3). The remaining constituents dissolve into dilute solution as simple inorganic salts.

The reactions occur within the pores of the tablets or sachets and not in the bulk solution. It’s only within the engineered pores that the concentration of chlorite anion is high enough to cause the chlorite anion to convert to chlorine dioxide. In contrast, use of a conventional chlorine dioxide reactor requires acidification of the entire bulk solution. With the new powder technology, the pH of the bulk solution remains substantially unchanged because the acidic reaction environment is confined to the powder’s pore network. This enables the tablets and sachets to be used in applications where bulk solution acidification is undesirable, such as production of alkaline detergent solutions of chlorine dioxide.

Conclusion
The new chlorine dioxide technology is highly versatile and effective. Numerous studies conducted by independent testing laboratories have shown that the technology:

Accordingly, the new technology is applicable to many types of consumer and institutional/industrial products where fast-acting microbial is necessary. It has been registered by the U.S. Environmental Protection Agency as an antimicrobial for use in numerous water purification and deodorization applications. Examples include car-wash recycle water, emergency drinking water purification, control of bacteria growth in ice machines and water cooling towers, treatment of white water mold and pink slime in swimming pool plumbing systems, and sanitization applications for pathogen control.

About the author
Michael Cochran is the business development manager for the Aseptrol antimicrobial at Engelhard Corp., of Iselin, N.J., a surface and materials science company that develops technologies to improve customers’ products and processes. He’s a member of the American Chemistry Council’s Sodium Chlorite Panel and has worked in the chemical industry for nearly 20 years. Engelhard has entered into several alliances to develop applications and market breakthrough products based on the new technology. Cochran can be reached at email: michael.cochran@engelhard.com or website: http://A HREF=”http://www.engelhard.com” target=”_blank”>www.engelhard.com.