The World in Numbers Waterworld

The global scarcity of water is overblown. The real problem is sanitation.

Earth is awash with 35 million cubic kilometers (km3) of freshwater. That’s about 1.5 billion gallons for every person alive today. The current effective supply, however, is only a small fraction of that gargantuan figure. As the pie graphs in 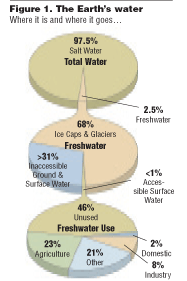 Figure 1 show, 68 percent of the Earth’s freshwater is locked up in ice caps and glaciers, and more than 31 percent is buried deep underground. Less than one percent of all freshwater on earth is easily accessible runoff—though even that tiny sliver represents about 524,151 gallons annually for each one of us.

The world’s water, however abundant, is unevenly distributed. The amount of water per capita (usually described and compared using the metric system) ranges from a high of more than 10 million cubic meters per year, in Greenland, to a low of 10 cubic meters in Kuwait. As Figure 2 indicates, 43 countries currently fall below the internationally recognized benchmark of “water sufficiency”—1,700 cubic meters per person per year (m3/p/yr). Twenty-nine of those countries experience “water scarcity,” meaning a supply of less than 1,000 m3/p/yr. Many countries in North Africa and the Middle East simply don’t have enough water for their citizens. Even some countries with a

sufficient total water supply have pockets of regional stress, including areas with large and growing populations, like northern China.

Although the 6.3 billion people on Earth today use only about 54 percent of the runoff that becomes readily available each year, those figures are expected to rise to 7.8 billion and 70 percent, respectively, by 2025. This has prompted dire warning from scientists and policy makers about an impending water shortage. But constructive steps are being taken to temper demand and expand supply—and there’s room to do both. For instance, irrigation, which accounts for nearly half of all

water used each year, is notoriously inefficient; in some developing countries, only 38 percent of the water put to agricultural use actually helps crops grow. Even a proven but not widespread improvement such as drip irrigation could drastically increase efficiency, thereby lowering demand. On the supply side, building more dams and reservoirs could expand the percentage of runoff that’s “caught” for human use; current systems catch only 12,500 of the 40,000 km3 of runoff available each year. And we haven’t really begun to tap the enormous supply of harder-to-reach deep groundwater. Today, we use only 600-700 km3 of easily accessible groundwater annually, whereas estimates put the amount of total groundwater in the earth at something on the order of 10 million km3.

The fact is, dirty water presents a much greater and more intractable problem than water scarcity. About two-fifths of the world’s population lacks access to modern sanitation. Unsurprisingly, sanitation problems display a distinct geography—rural people suffer more than urban (about 80 percent of those who lack access to sanitation live in rural areas), and poor countries suffer more than wealthy ones. In India and China together, more that 1.5 billion people live in areas without sanitation facilities.

One of the world’s leading pollutants is human and animal excrement. Many countries dump raw sewage into their

water supplies; poor, predominantly rural nations are often unable to clean this fouled water before people use it for bathing, cooking or drinking. Afghanistan is worst off—87 percent of its population lacks access to clean water. A number of African countries—including Ethiopia (76 percent), Chad (73 percent), and Sierra Leone (72 percent)—are not far behind.

Dirty drinking water causes widespread illness. More than 2 million people die each year from waterborne diseases, which are almost entirely preventable. The great majority of these deaths come in developing nations, among children under the age of 5.

Cleaning dirty water and preventing its myriad consequences isn’t easy. Sewers to remove fouled water, treatment plants to clean it, and hospitals to treat those sickened by waterborne illness are expensive. Africa and South Asian countries, which suffer the most from dirty water, are generally the least able to build a clean-water infrastructure. These nations don’t have a shortage of water; they have a shortage of money.

About the authors
Jen Joynt is an editorial research analyst for The Atlantic Monthly. The above article is reprinted with the permission of the magazine. It first appeared in the July/August 2003 issue. To reach either author, contact the magazine at website: www.theatlantic.com

Marshall T. Poe is the author of several books on Russian history, including A People Born to Slavery: Russia in Early Modern European Ethnography, 1476-1748. He has taught history at Columbia University, New York University and Harvard University, and is currently an analyst with The Atlantic Monthly.