Polio, hepatitis, herpes, measles, heart disease, arthritis, diarrhea, flu, the common cold, the dreaded SARS, and many other illnesses are caused by viruses in our environment. How much do we really know about these organisms, their transmission routes, prevention and treatment? The following article is a crash course in viruses and their impact on public health.

What are viruses?
Viruses are primarily composed of a nucleic acid (DNA or RNA) strand and an outside capsid, or coat, of protein. Some viruses are also surrounded by an additional lipid membrane and are known as enveloped viruses. Viruses don’t contain the structures necessary for cellular functions of metabolism and replication and thus must rely on a host cell to aid in their multiplication. Although viruses can survive outside of a host cell, they cannot replicate on their own in the environment. Thus, viruses aren’t thought of as living things, but rather as viable structures known as virions. Viable viruses, or virions, are able to initiate an infection in a host. For every virion in the environment, there may be tenfold or higher non-viable viruses known as particles. Non-viable viruses lack one or more key structural components and thus aren’t able to cause an infection in a host.

Viruses are simple in structural composition and vary widely in appearance; some with very complex shapes resembling spiked balls or lunar space landers. On the outside surface of viruses are receptor sites highly adept at recognizing specific host cells suitable for supporting the growth of particular viruses. Because of these receptors, viruses are largely species-specific, meaning human viruses infect humans, plant viruses infect plants and animal viruses infect animals, although a handful of viruses have been shown to cross the species barrier and jump from animal to human hosts.

The surfaces of viruses are charged due to the presence of amino acid functional groups. In neutral solutions, such as most natural waters, viruses are negatively charged but, as the solution becomes more acidic (i.e., the pH is lowered), viruses exhibit a conformational shift in the structure of their surface proteins, resulting in an overall positive charge on their surfaces. The pH at which this shift occurs is known as the isoelectric point, and can be different for various viruses. Historically, viruses were defined as “non-filterable agents” because they were able to pass through filters with pore sizes small enough to capture bacteria. Today, we know that by using oppositely charged filter media, viruses can be captured from suspending solutions. Knowledge of virus isoelectric points has played a major role in the development of charged filtration equipment aimed at isolating viruses from the environment.

Host invaders
Viruses are commonly present in the environment, insect vectors, on surfaces, and in the air, food and water we ingest. Once inside the human host, viruses adsorb to the host cell and are either wholly engulfed into the host cell or effectively inject their nucleic acid into the cell wall. Next, the virus genetic material takes over the host cell mechanics, forcing it to create more virus parts. 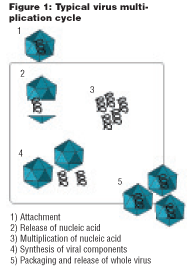 Following replication, virus parts are assembled and released from the cell, now able to invade neighboring cells and repeat the process (see Figure 1). Exiting the host cell may be violent and destroy the cell itself, or the virus may bud out of the cell and leave it intact. Because one virus can enter a single cell and thousands may leave that same cell, virus infections can spread very rapidly throughout the body.

Infection of a cell by a virus is often, but not always, debilitating to the cell’s regular functions. Viral infections may be asymptomatic (causing no noticeable symptoms in the host), or cause acute or chronic illness. Acute illness is an episode directly associated with infection such as the common cold. A chronic illness may be slow, gradually increasing in effects and reoccur at some interval. Even asymptomatic infections can be contagious to others. Some viruses, known as latent viruses, have evolved to remain dormant in the body, replicating slowly or intermittently (i.e., HIV and herpes viruses). Oncogenic viruses are known to cause cancer. These viruses don’t destroy the host cell but rather alter its functionality, directing the production of malignant cancer cells. Viruses that kill the cell in which they replicate are called cytopathogenic. These viruses are often detectable in the laboratory as their destructive effects are highly visible in cell cultures. Many important public health viruses haven’t been grown outside of a living human host, making their study very difficult.

Treatment and prevention
Treatments for virus infections are limited and often supportive therapy—treating the symptoms rather than the infection—is the only option. Antibiotics are generally not effective against viruses. Antiviral agents have been developed to slow the progress of viruses, but are rarely a fast or complete cure.

Vaccines are frequently used for the prevention of virus infection. These immunizations are designed to expose the host to controlled levels and altered states of viruses to elicit the production of antibodies. Upon re-exposure, the host cell remembers the agent and acts more quickly and pointedly in response. Unfortunately, viruses can rapidly mutate and be unrecognizable to the host defenses even in immunized populations. Predicting which virus strain will emerge in a given season is difficult. This is why the flu shot doesn’t always “work.” Vaccines have aided in the worldwide eradication of smallpox and virtually eliminated polio, measles and rubella in developed nations. Although rare, complications from vaccines have been documented and can be severe. In addition, vaccine exposure to pregnant and other immunocompromised populations may have increased risks.

Prevention of virus exposure and infection is the safest and possibly most effective means of control for these organisms. Many human viruses can be avoided by reducing exposure factors such as shared needles or sexual contact, while others are widespread in the environment and difficult to avoid. Human viruses can be spread by the aerosol route via sneezing, coughing and vomiting; however, surface contamination is thought to play a major role in their transmission. Consider the study of a room full of people that has one person with a cold. After hours of exposure in an enclosed area with a symptomatic person, few contracted the disease unless they shook hands with the ill person upon entering the room. The bottom line is the benefits of frequent and diligent hand washing cannot be over-emphasized. In fact, scientists estimate proper hand washing could reduce the infectious disease rate by approximately one-half.

The waterborne route
Most viruses of concern in food and water are known as enteric viruses, meaning they’re able to recognize and invade the gastrointestinal tract. Proper handling and treatment of food and water is vital to the prevention of enteric viral disease transmission. These viruses include enteroviruses, adenoviruses, rotavirus, hepatitis A virus, and caliciviruses and are spread by the fecal/oral route, commonly via contaminated food and water. In aquatic and subsurface environments, viruses can attach to sediments where they’re protected and able to survive for months. Their long survival time and small size (0.08-500 microns or roughly a millionth of an inch) aid in their ability to travel long distances through soil and water.

Enteric viruses typically survive longer in the environment than most enteric bacteria. Viable human viruses have been detected in surface waters, groundwaters and even treated drinking waters. A recent nationwide survey, using molecular detection methods, found a third of all drinking water wells used by utilities contained evidence of contamination by pathogenic human enteric viruses.1 Although the molecular methods used don’t determine if the viruses were infectious, there’s much concern over the presence of viruses in groundwater as many well water sources aren’t treated.

Although only 8 percent of documented drinking water outbreaks from 1971 to 1994 were determined to be due to viruses, many more cases of infection are known to occur unnoticed.2 Typically, only acute, severe, and/or widespread outbreaks are documented. Conventional treatment is effective for eliminating most viruses from drinking water; however, various strains are known to be more resistant. Norwalk virus, one of the major causes of waterborne disease in the United States, remained infectious to humans after exposure to 3.75 milligrams per liter of chlorine with 30 minutes of contact time.3 Others have found infectious viruses in drinking water that received what was believed to be adequate disinfection.4

Conclusion
Studies of viruses and immunity of humans began as early as the late 1700s with the smallpox virus. Since then, we’ve learned much about these agents and the diseases they cause. Unfortunately, we’ve progressed little in finding a cure for viruses once they invade a host. Therefore, efforts are largely focused on prevention of exposure and infection. Advanced water treatment technology including distillation, reverse osmosis, ultraviolet light and ozone, can dramatically reduce the presence of human viruses in drinking water.