As 2002 drew to a close, water issues continued to gain increased public attention around the world. Record drought conditions persisted across much of the United States last year and, at the United Nation’s “Earth Summit” in Johannesburg, South Africa, in September, the lack of clean water to meet the needs of a growing global population was one of the most pressing topics on the agenda. We’ve seen a flurry of media stories on declining water supplies and water infrastructure problems recently, and we’re seeing more public policy focus on water than at any time in recent memory—including a resurgence of negative opinion about the “dangers” of “water privatization.” But what does this mean for investors?

In our view, water markets are gradually coalescing into a definable industry sector and, in time, Wall Street should also become more knowledgeable about the water industry—and attracted to the positive long-term fundamentals in the sector. The demand statistics are compelling: the U.N. says more than 1 billion people have limited access to clean water, and the number could triple by 2025 if consumption continues at current rates. Water treatment, water recycling and reuse, desalination, infrastructure replacement and outsourcing of water management services should see rising demand in coming years.

The cold shoulder
So why hasn’t Wall Street yet jumped into the water business, a $300 billion global industry with positive long-term growth fundamentals? The answer appears to be two-fold—the water industry, in relatively early stages of development, remains fragmented, with few large companies and few pure investment plays thus far (although the pace of consolidation seems to be moving to reverse that); and water supply is a politically complex issue, still dominated by government control and by the public misperception that “water is free.”

Even the French water companies, Vivendi Environnement and Suez, which are by far the largest companies in the sector with about $23 billion in annual water revenues between them, hold a relatively small share of the global water market. Nor are they “pure play” water stocks, as they also offer energy, waste and transportation services. Indeed, their stock prices declined last year for reasons that have little to do with water business fundamentals.

Suez currently generates about 65 percent of its revenues from the energy business (including electricity and gas trading) and only about 21 percent from water. In the midst of broader market decline, investor concerns about Suez’s energy trading business and its exposure to Latin America combined to push the stock to lows not seen since 1997. Vivendi Environnement, on the other hand, derives about 60 percent of its revenues from water and has been hurt primarily by its relationship to its troubled parent, Vivendi Universal. Though Vivendi Environnement is newly independent, with Vivendi Universal having reduced its stake to 20 percent, concerns about its troubled parent weighed heavily on Vivendi Environnement’s stock price throughout most of 2002.

A small world
Outside of the large European utilities that lead the sector, most water companies are very small by global industry standards. Some are privately held, and the publicly traded ones have small market capitalization, with limited trading liquidity. Or, water businesses are subsidiaries of larger firms, such as General Electric (recent acquisition: Osmonics), Danaher (recent acquisition: GLI) and ITT Industries (recent acquistion: PCI Membranes, see International this issue). Further, water utility stocks are typically covered by different Wall Street analysts than the ones who cover treatment, equipment and technology firms. This fragmentation has made it difficult for Wall Street to look at water as an integrated industry.

Investors also worry about political risk. The issue of private sector involvement in water remains politically controversial, as some policymakers and activists argue that such a critical economic asset as water should remain under public sector stewardship. Still, the simplistic argument that water is a fundamental human right—like the air we breathe—is gradually giving way to a clearer understanding that the delivery of clean water to the tap costs a lot of money, and private sector capital and expertise will increasingly be needed.

Stocks give back earlier gains 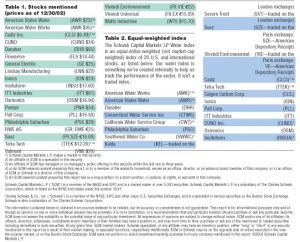 Along with other financial markets, the water stocks took a hit in the latter part of last year, after posting strong performance as a group in 2000 and 2001 and holding steady in the first half of 2002 (see Table 1). As of Dec. 27, the Schwab Capital Markets L.P. Water Index, an equal-weighted index of 20 stocks involved in the water industry, was down 16.5 percent in 2002, having given up much of its earlier gains but still slightly better than the Dow and noticeably better than the S&P 500 and the Nasdaq indexes (see Table 2). Since the beginning of 2001, the index is up slightly vs. major declines for the broader indexes.

Water utilities have been among the best performers in the group, with American Water Works posting gains and American States Water holding steady and other water utility stocks, which have been strong performers in recent years, declining only slightly. The approval process for Germany’s RWE AG’s $7.6 billion purchase of American Water Works has moved along slowly, with key states such as California taking their time to sign off on the deal, which is expected to close in the first quarter of 2003. This leaves Philadelphia Suburban as the largest independent U.S. water utility. Last fall, the company completed a successful secondary offering, in which Vivendi Environnement sold its 17 percent minority stake in the company for about $200 million.

Suez shares, meanwhile, dropped just over 50 percent in 2002, as investors worried about economic crisis in Argentina and Brazil and the company’s potential exposure to the beleaguered U.S. electricity industry. A recent move by Suez to sell off its European electricity assets to a Belgian utility—Electrabel S.A., which is 44.45 percent owned by Suez—may be a step in the right direction for the beleaguered company. Meanwhile, excluding Argentina, the company posted generally solid operating results in the first half of 2002.

On the positive side
ITT Industries was one of the best performers in our group in 2002, up 20 percent, as it gained a valuation boost both from its expansion in the water business, which comprises about 40 percent of revenues and from accelerated growth in its defense electronics segment.

CUNO, a well-managed, small-cap filter company that was a strong outperformer in the past two years, continued its strong performance, up over 10 percent for the calendar year after reporting strong results for its 2002 fiscal year, which ended in October. Ionics and Pall Corp., which have felt more of the negative effects of the economic downturn, gave up 23 percent and 31.5 percent, respectively, of their market value last year, though renewed interest in desalination and municipal water treatment demand has provided support for the stocks at lower price levels. Osmonics experienced an end-of-year surge, with the stock gaining nearly 65 percent since its Oct. 10 low, on strong third quarter operating results and news that the company would be acquired by GE. Osmonics was up nearly 21 percent on the year. The Osmonics-GE merger recently received early termination of the Hart-Scott-Rodino antitrust waiting period, and the companies expect the merger to be completed in the first quarter of 2003.

Tetra Tech and Insituform, which are involved in the infrastructure markets, have had a tough year in 2002, with their stock prices down about 37 percent and 32 percent, respectively. While both companies have been hurt by slow customer spending in some of their market segments, both are well positioned for the long-term demand growth in the water infrastructure markets going forward. In the latter part of 2002, Tetra Tech announced more than $100 million in new water-related contract awards plus an Air Force contract potentially worth up to $2.75 billion, the largest in the company’s history.

On the other hand…
By far the worst performer in the group in 2002 was Cadiz, a California water resources developer, which lost 93 percent of its value last year and is now trading at just pennies per share. The company has clearly shown the political risk inherent in the nascent water wholesale business in California, with local politicians having recently voted to kill the company’s signature water project, which has been in development for five years and which recently won a key federal permit.

With the rising demand for water treatment and more efficient management of water resources, we are reviewing other companies in the equipment and machinery sectors for addition to the Schwab Water Index, even though they aren’t “pure plays” on water such as Flowserve, Pentair and Watts Industries in the pumps and valves markets, and Lindsay Manufacturing and Valmont Industries in the irrigation/infrastructure markets. Pentair (recent acquisition: USF Plymouth Products) shares were down about 7.5 percent in 2002 while Watts Industries (recent acquisition: Hunter Innovations) shares held up well last year and remain stable. Flowserve (recent acquisition: Invensys’ Flow Control Division) fell sharply on earnings and liquidity worries, with its stock price down more than 45 percent on the year. Meanwhile, both Lindsay and Valmont rose strongly—13 percent and 39 percent, respectively—as they were viewed as beneficiaries of drought-related spending.

In sum, water stocks had a bumpy ride in 2002, but the group as a whole continued to outperform the broader markets, even as underlying demand trends continue to gradually strengthen.

Conclusion
With strong fundamentals and an increasing worldwide need for clean water, Wall Street is bound to sit up and take notice of this oft overlooked sector in the coming year. A cyclical recovery in the industrial water markets, combined with increased attention to water infrastructure investment, should provide a solid base for earnings improvement for most water companies in 2003 and 2004.