Summary: While other contaminants, such as arsenic and radium, may have been in the news more frequently in recent months, radon remains of great concern for the water treatment industry. A free software program to assess health risks is available online.

Astudy of radon risks focused on water leads to the conclusion health risks are not so much from the water we drink but more from the water we use. An estimate of radon risk to individuals or groups should consider the sources and pathways of radon in each case so radon reduction plans can be realistically decided upon. Consideration of an individual’s smoking history contributes to the total picture since smoking amplifies radon’s ability to foster lung cancer.

What makes it a health risk?
People generally don’t realize how much potential radon has to cause lung cancer. In reality, it’s far greater than the risk of stomach or other cancer from ingesting radon-bearing water. Most lung cancer victims are smokers, so smoking is assumed to be the primary cause. This may be true, or it may be instead that radon caused the cancer or played a substantial role in its development. Radon-exposed smokers have five times higher risk of lung cancer than a person who never smoked.

The National Academy of Sciences1 and the U.S. Environmental Protection Agency (USEPA) currently estimate that radon (specifically, the radon isotope 222Rn) causes about 18,000 U.S. lung cancer deaths a year, of which about 165 are attributable to water sources (plus about 20 stomach cancers from ingesting waterborne radon). And although the waterborne risk is generally smaller than other sources of radon in indoor air, it’s a greater health risk than that of other regulated drinking water contaminants.

While tobacco smoke is readily identifiable, radon is an invisible but potentially lethal gas whose many isotopes are all radioactive, making it a proven carcinogen like tobacco smoke. Colorless and odorless, radon is produced by its parent, radium, as part of the decay of uranium, an unstable element commonly found in our rocks and soil. In its continuous decay process with a half-life of 4.5 billion years (on its way to reaching a stable state as lead), uranium and its successors discard nuclear particles forming other elements. As they’re created, all these radioactive elements can be released into our water and air.

Lung cancer, the most common radon-related cancer, can be caused by electrically charged alpha particles emitted in the decay of radon. Since radon is constantly decaying, producing progeny and expelling charged particles, these progeny and their successors, which are also decaying, are in our air. When radioactive radon progeny (such as Polonium 210 or Bismuth 214) are breathed in, they tend to stick electrostatically to surfaces like lung tissue. Expelled charged particles passing through matter leave a track of excited and ionized atoms and molecules damaging living lung tissue. Then, if partially destroyed tissue cells don’t correctly repair themselves, cancer can begin.

On the other hand, breathing radon gas (like that released directly into outdoor air from rocks, soil or water) is a much smaller risk. Although radioactive, the inert gas is non-reactive chemically and doesn’t stick to surfaces. It can still enter the bloodstream, however, via the lungs. But for radon dissolved in the bloodstream to have a damaging effect, it must decay while still in the body. Alpha particles from the decay are expelled with high kinetic energy while the emitting nucleus recoils and waits to decay again and again.

The risk from our water begins when dissolved radon comes out of solution and transfers to the air. In the home, radon can be released into the air by taking a hot shower, washing clothes or running the dishwasher. Other home uses of water involving less heat, spraying, agitation or volume cause fewer problems. The bottom line is only 11 percent of the water risk comes from ingesting radon-laced water while breathing waterborne radon and its progeny accounts for 89 percent of the risk from radon in water.

Current take on radon
The view of radon in drinking water has changed greatly from the day people used “emanators” to release as high as 2 million picocuries per liter (pCi/L) of radon into their water, believing radon in hot springs had curative powers (see Radon: The Historical View). Today, the USEPA5 has proposed a maximum contaminant level (MCL) of 300 pCi/L. This level, along with an alternative limit (AMCL) of 4,000 pCi/L based on the water equivalent of outdoor air, was recommended in a pending radon rule for public water supplies. This proposed regulation, in what’s described as a multimedia approach, justifies a higher AMCL by requiring risk reduction from non-water sources equal to or greater than what would have been obtained by meeting the 300 pCi/L MCL.

Even this seemingly low level of radon isn’t without risk, which is proportional to concentration; so some level of risk exists until the concentration is zero. If someone ingests and uses water containing 300 pCi/L of radon over a period of 75 years (a risk statistic lifetime), his/her chance of developing radon-related cancer is about 1 in 5,000. At the USEPA’s proposed AMCL, the chance of developing cancer for the same water use period is about 1 in 375. 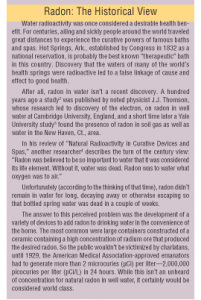 There has been a growing awareness of radon dangers by health officials, real estate personnel, water system staff and the general public, which led to a moderate level of radon testing of indoor air in the last decade. Today, home inspectors are increasingly testing for radon in indoor air as part of real estate transactions. In some regions, this includes a separate determination for waterborne radon. Radon-releasing water use events (heating, spraying, or agitation of water) in the home, however, often aren’t considered with the other risk factors.

Short-term winter radon detection tests performed in the basement when the house is closed and the heating is on generally reflect the worst case scenario. (For example, suction created by the furnace’s blower depressurizes the basement, drawing radon in through the cracks.) This greatly overestimates radon risk from indoor air since risk is proportional to the annual average radon content of the living areas, not measurable by a one-shot deal in the basement. This results in a pronounced shortfall in the number of cancer cases attributable to soil gas-derived radon when compared to the cancers predicted from this data.

Soil gas-derived risks are largely unique to a specific residence while the water-derived radon risk may be unique to a residence if the water source is a private well. Outdoor air has an average concentration of 0.4 pCi/L, which is overshadowed by the generally higher soil gas radon contribution of several pCi/L to tens of pCi/L. By contrast, water might have a few hundred pCi/L. Groundwater can contain much higher radon concentrations (occasionally millions of picocuries), especially water from bedrock wells produced from granite or other rock types containing appreciable amounts of uranium. Only small, inconsequential amounts of radon are found in surface water, where radon and other gases are able to dissipate.

While radon readily dissolves in groundwater, it can also be readily removed from water to reduce its health risks. This can be done through treatment by highly efficient aeration devices or granular activated carbon (GAC) filters.

Computerized risk assessment
Given the technical aspects and variables involved in calculating radon risks, estimating these risks by hand with any degree of validity is extremely difficult. To make this task easier and less error-prone, a computer is more effective. In one software program, the “Unified Radon Relative Risk Model” (UR3M), a user types in as few as two laboratory-determined values and selects information specific to a particular home. The program calculates the homeowner’s risks, considers cost effectiveness of possible remediation techniques, and/or compares compliance with the USEPA proposed Radon Rule for public water supplies. UR3M and CARBDOSE, a related radon risk program, are available at the USEPA’s Region 1 website.6

UR3M considers the three radon sources, three exposure pathways, specific measured values and the home-owner’s smoking history to arrive at a realistic estimate of the problem. It then presents appropriate risk reduction methods for that case, attainable risk reductions and associated initial cost factors. The result is a personalized, comprehensive assessment of health risks from radon and suggested solutions if indicated. People can then make better-informed decisions with respect to radon reduction. A screen from this program is shown on the next page.

UR3M reports its radon risk calculations with bar graphs as well as numbers for ease of communication. As shown in Figure 1, the program presents a composite picture of that person’s (or household’s) total cancer risk by unifying all air and water radon sources with the individual’s smoking history.

The program can also be used by those exploring risk reduction in multiple homes served by public water supplies by using the “General Population” smoking category, an average of smokers and non-smokers. If a public utility distributes water containing significant amounts of radon to homes that have additional residence-specific radon risks, that is of shared concern between the individual and the public sector.

Conclusion
An understanding of the nature of radon and its health risks is vital in determining what should be done about them. Risk reduction plans can best be based on a comprehensive evaluation of radon risks from all sources. Tools are available at no cost from the USEPA to individuals, water supply personnel and public health professionals for this purpose.

Dr. Stan Rydell is with the USEPA, Region I, Office of Ecosystem Protection, Radiation Unit in Boston. He holds a doctorate from Florida State University in geochemistry and radiochemistry, and was an FSU Nuclear Research Fellow at Oak Ridge Institute of Nuclear Studies, Oak Ridge National Laboratory in Tennessee. He developed the Unified Radon Relative Risk Model computer program mentioned here. He can be reached at (617) 918-1637 or email: rydell.stan@epa.gov