Principles of Filtration: How do Filters Filter Anyway?

Summary: Filtration has long been an important technique in water treatment. It’s used to remove iron deposits from water, to clear up waters turbid from silt, inorganic sediments and biological materials, both living and decomposing. It’s a primary method of separating fluids from solids—and is often not well understood.

The most common perception of filtration is one of straining, or sieving, as if the suspension is passed through a series of successively smaller screens or colanders with the particles being contained according to size. While this is a convenient visualization of filtration, it’s a misperception that leads to faulty filter design. Straining is only one of several mechanisms operating during the filtration process. A better understanding of these mechanisms is important to the design and operation of filters. So how do filters work?

In this discussion, we’ll focus on the mechanisms of capture in granulated media filters, and allow for the likelihood of similar mechanisms in case of fiber filters. We’ll also focus on capture of particulate, not ions in solution whose capture can be better described as by adsorption. Adsorptive media include granular activated carbon (GAC), activated alumina (AA) and zeolite, all of which are better referred to as “contac-tors,” not filters, although they do have limited filtration capabilities. Moreover, we’ll limit our attention to water filtration, although the principles apply to particles in air, wastewater and other fluids as well. 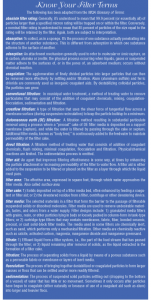 Match the filter to the task
First, let’s establish that there are different types of filters with different filtration applications. Fabric filters, such as bags or cartridges, are composed of fiber that allow for capture into a fixed matrix that is replaced when filled. Membranes exclude particles by establishing pore sizes smaller than the particles (here, straining is the primary mechanism). In the case of granulated media, some capture is accomplished by straining, but most is by other means of attachment to the collector grains.

Filters composed of granulated media can capture material throughout the depth of the bed, and can be cleaned by backwashing. Some membrane filters use a crossflow pattern of water flow so that the rejected debris is continuously swept away. Bag and cartridge filters made of porous fibers, ceramics or a combination of materials generally must be replaced when dirty, although they can sometimes be chemically cleaned.

Pre-coat filters with diatomaceous earth, or slow sand filters that rely on formation of a cake or schmutzdecke (literally, “dirty layer,” a layer of biological growth, exopolysaccerides, or slime, and captured debris), are cleaned by scraping or replacing the media. Membranes can also filter by forming a cake. A cake is a layer formed by the removed particles themselves. Membranes can also be designed to have a cleaning cycle but, when heavily fouled, they too must be chemically cleaned or replaced.

It’s also important to note that nature seldom presents particles in a uniform manner. Filters are usually faced with a large variation in the nature, composition, and shape and size of the material being collected. From a spectrum of sizes between 0.1 micron (µm) to 20 µm or more, a range of compositions consisting of organic and inorganic flocs—microorganisms and particles that drift in and out of solution depending on conditions—filters face a wide array of materials.

Transport and attachment
Filtration physics is commonly divided into two steps—transport and attachment. Transport is the means by which a particle is moved by the fluid through the filter and into proximity to the granule, fiber or membrane. Attachment is the means through which the particle is captured. In the simple case of sieving, capture occurs because the particle is too large to pass through the pore between the granules or grains, the fibers or the semi-permeable membrane surface. As particles are captured in the pores, the pores themselves become smaller and efficiency improves. As efficiency improves, the headloss—or pressure across the filter—increases until the filter is fully clogged and cleaning is necessary. If this is the only mechanism, however, particle capture could be easily quantified by measuring the sizes or pores. That’s not the case, though, as particles much smaller than the pores are captured.

Getting the particle there
Transport is usually further divided into diffusion, straining, interception, inertia, sedimentation and hydrodynamic action. Transport mechanisms describe the path of a particle through the filter. As a particle approaches a collector grain, the fluid is directed around the grain and through pores between grains. Although water is normally moving slowly (laminar flow), the particle will move in response to the flow stream, the effect of collisions with other particles and water molecules, and rotational forces on the particle itself (which depend additionally on the particle’s shape). As this would suggest, a precise mathematical description is elusive for any filtration application and is outside the scope of this article; however, filter scientists have generated a number of models to illustrate the various mechanisms.

In the instance of cake filtration and as the cake is formed, you would expect the pores to become smaller and smaller. This is the case, which explains why cake filtration improves in quality just before the filter fails. Moreover, the compression of the filter cake plays a role in filtration. An example would be applications involving slow sand or biological filtration beds where a layer of collected contaminants is formed at the top that acts as an additional filter.

In granulated filters, though, the filter grains withstand pressure applied by the flow, and attachment mechanisms are such that particles many times smaller than the filter grain can be captured. The pore between the filter grains is, of course, dependent on the size and shape of the grain. In the ideal case of spherical grains, minimum pore size can be mathematically calculated to be 15.47 percent of the size of the sphere.

Particles are moved through the bed in the fluid subject to inertial forces—their own tumbling movement through the fluid—and gravitational forces acting on them. Gravitational forces are those apart from the force of the moving water itself. In addition, molecules of water impinge on the particles to move them about randomly, also known as Brownian motion. Some particles will impact on the top surface of a collector grain and stay there. Others will impact on or around them, and will attach to the top as well, building a “dome.”

Some particles will move through the pores and will hit the sides of the grain where they may attach to the side. A particle in this position is subject to subsequent detachment through interaction with other particles or through water scour, or scrubbing force of the water.

Brownian motion can send a particle into the bottom of a collector grain as well. Thus, a collector grain isn’t restricted to capture only on its top or in the pores. It’s helpful to remember that water molecules are several magnitudes smaller than the particles and many magnitudes smaller than the collector grains. A water molecule has an approximate spherical radius of 3.15 angstroms (Å)—1 Å = 0.1 nanometers (nm) = 0.0001 µm = 0.0000001 millimeters (mm)—so a 3-µm particle, which is the size of a Cryptosporidium oocyst, is 10,000 times larger. To put this in perspective, if the water molecule were the size of a grain of filter sand (0.500 mm), the particle would be five meters (16 feet) in diameter, and the collector grain would be about half a mile in diameter.

Following collision with a collector grain, attachment (and detachment) forces enter into play, since most particles in water are slightly electronegative. That is, they’re slightly out of charge balance because of additional electrons. As a result, they repel each other and are in turn repelled by the collector grains, which are also electronegative. While some media are positive at some pH levels, attachment is inhibited by electrical repelling forces. Since pH is a measurement of the concentration of hydrogen ions, which are positive (protons), the pH of the water is an important factor in attachment. So what does allow the particle to stick to the grain?

Again, as there are a number of transport descriptions, there are a number of attachment mechanisms and one or more may be involved in any single filter circumstance. It may be that in a single filter run, several possible mechanisms are employed. Opposite electrical charge will cause attraction for some particles, not only to the collector grain but to each other, thereby changing the size, shape, weight and inertia of the particle. But the “stickiness” is a function of several forces that occur between and among particles and collector grains, double layer forces and van der Waals forces (see EXTRA), among others.

Finally, it can be said that different contaminants require different mechanisms for a filter to work. Nature seldom offers a single constituent in a water suspension, i.e., a particular solution. Often, different mechanisms are required for the filter to perform effectively on the various contaminants and combination of compounds that may be present.
For example, positively charged iron flocs may attach by means of the “opposites attract” factor. Particles of calcium carbonate (calcite) or biological particles (electronegative) may collide with the filter collector, drive through an electric barrier and attach through van der Waals force. Electrically neutral particles of aluminum or silica may also attach through the weak double layer force, while ions of calcium surrounded by water molecules—in solution—will pass through entirely only to be later captured by a softener.

Conclusion
Filters are a complex of chemical and physical forces acting on particles to allow capture and retention. Knowing the composition of the water contaminants is essential to proper filter design, and an understanding of the methods of collection for different substances will help the water treatment specialist apply the appropriate filtration method to a water treatment problem.

About the author
Larry Henke, technical director at the Robert B. Hill Co., of St. Louis Park, Minn., near Minneapolis, has more than 20 years experience in the water treatment industry. He’s a graduate of the University of Minnesota and is a member of the American Water Works Association. Henke also has been a member of the WC&P Technical Review Committee since 1996. He can be reached at (952) 925-1444, (952) 925-1471 (fax) or email: lrhenke@email.msn.com