Arsenic in Water: A Brief Overview

Summary: In October, the U.S. Environmental Protection Agency (USEPA) issued an additional ruling on the allowable concentration of arsenic in drinking water, affirming its lowering from 50 parts per billion (ppb) to 10 ppb. This step, taken to safeguard the public health, has important implications for water treatment professionals and their customers.

The change in the arsenic standard was the result of many years of negotiations between the business, scientific and regulatory communities about the health effects of arsenic and the best way to protect the public. New studies released last year by the National Drinking Water Research Council (NDWRC) and the National Academy of Sciences (NAS) indicate the original USEPA estimates of probable health effects from ingestion of arsenic-contaminated water were low and a decrease in the acceptable limit was required.

What is arsenic and why is it important? Why is it considered a danger to public health? How is it measured? How can it be removed? The public will be asking more of these basic questions as the water industry moves to comply with the new ruling. Here, we’ll try to answer some of their anticipated questions.

It’s elemental
Arsenic is a naturally occurring element, the 20th most abundant in the Earth’s crust. It’s used in production of metal alloys, manufacture of insecticides, pressure treatment of wood, and even as treatment for certain medical conditions. Runoff and discharges from mining operations and manufacturing processes have been implicated as sources of water contamination. During the Civil War, it was a popular component of embalming fluid—even groundwater near old Civil War cemeteries has been found to contain elevated levels of arsenic.1,2

‘Organic’ is harmless
Arsenic is often found in combination with ores and soils that also contain chlorine, sulfur or iron. As water passes through arsenic-bearing layers, the element leaches into the water. It’s absorbed by some plants and makes its way into the food supply, but this “organic” arsenic isn’t considered harmful. The U.S. Food and Drug Administration (FDA) estimates that we ingest around 0.053 ppb of dietary arsenic every day.1 That is the mass equivalent of about 0.0002 percent of a dime.

The “inorganic” forms, As V (As+5) and As III (As+3), are more likely to be found in water and are more of a health concern. The U.S. Geological Survey (USGS) prepared a fact sheet in May 2000 that compiled groundwater survey data from across the United States. Collected over 20 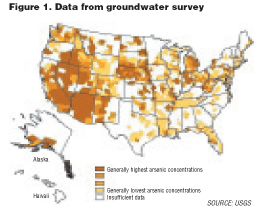 years and from 18,850 wells, the data show several areas in the United States with arsenic concentrations greater than 10 ppb. Figure 1 is a map from the USGS fact sheet that summarizes the data.4

A danger to public health?
Arsenic is a known carcinogen, causing cancers of the skin, liver, bladder, kidneys and other organs. It’s implicated in cardiovascular disease and diabetes. In areas of Bangladesh, where people have been exposed to arsenic contamination for long periods, horrific skin lesions are common. The USEPA normally considers a cancer risk of no more than 1 per 10,000 individuals as acceptable. The new studies suggest the cancer risk from exposure to levels as low as 3 ppb of arsenic is closer to 4 to 10 cancer deaths per 10,000 individuals.3 These findings made it clear that the limit needs to be reduced. At this time, a safe level of arsenic in drinking water remains under debate.

The 10 ppb level was chosen because decreasing the acceptable limit to 5 ppb or less would stretch the existing arsenic removal technologies, and possibly cause economic hardships for water suppliers who would be out of compliance. It’s estimated that 4,000 systems will be affected by the new standard. Most are expected to be small water suppliers (less than 10,000 customers) that will need to retrofit their facilities and/or hire extra staff to comply. Small water companies have budgeting problems, made worse by the recent recession. The small water companies can inform their customers on their distribution systems about the arsenic levels, but may need to work with their customers to find the best solution. One option could be partnerships with vendors to provide in-home remediation units at a discounted cost. With such an arrangement, the customer’s problem is solved and the utility is in compliance with a limited economic burden. The compliance date is January 2006.5

Removing arsenic
Several technologies are available for lowering the arsenic content of drinking water, ranging from the simple to the complex. One interesting method, SORAS (Solar Oxidation and Removal of Arsenic), has been tested in Bangladesh. In this method, small amounts of water can be treated using PET bottles, iron salts, lemon juice, and sunlight to reduce arsenic concentrations by 80-to-90 percent.6 For larger systems, ion exchange, activated alumina, reverse osmosis, greensand, iron filings and coagulation have been used. A few specialized media targeting arsenic have emerged in recent years as well.

Each technology has its benefits and drawbacks. Some, such as ion exchange, raise waste disposal issues since the waste stream is so concentrated. Others, such as activated alumina, require use of harsh chemicals and may be difficult for small suppliers to handle.

Table 1 is condensed from a report from the USEPA on drinking water and arsenic. Further discussion on these technologies may be found in that report.7 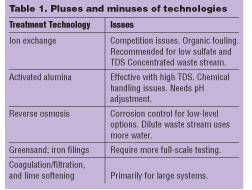 Compliance testing
Compliance also requires testing. Arsenic determinations are usually performed by graphite furnace atomic absorption or inductively coupled plasma techniques at a cost of $15-50 per sample. These methods can be specific, fast and reliable. They can achieve the level of sensitivity needed to detect arsenic at the low concentrations desired. These methods, however, require expensive instruments and highly trained staff, and aren’t easy to transport to the field.

Portable test kits are available for operators who need to perform tests in the field. A good test will meet the requirements for specificity (i.e., it will not provide false positive test results). It will also be sensitive enough to detect arsenic at the regulated level and below. Plus, it will be reliable and easy to use. The entire process should be short for those who need to perform multiple determinations. A well-planned field kit will have an economical cost per test, and have all the components needed to complete the testing.

Quick test
One test kit under evaluation is able to reliably detect arsenic to levels less than 5 ppb. It has an analytical range of 0-to-0.5 milligrams per liter (mg/L), or 0-to-500 ppb. The range can be extended to 2.5 mg/L with a 1-to-5 dilution step.

The method requires the operator to add 100 milliliters (ml) of sample to a reaction vessel. Two reagents are added to the sample. The third reagent is added and the sample is allowed to incubate for 10 minutes. The arsenic in the sample is converted to arsine gas, and the gas is detected by a test strip inserted into the reaction vessel.

Sulfide is known to naturally occur with arsenic. The average person can detect the odor of hydrogen sulfide at 0.01 mg/L. At 0.3 mg/L, the odor is offensive. The method is designed to negate the effects of hydrogen sulfide up to 2 mg/L. Samples may range in temperature from 25°C (77°F) to 40°C (104°F) but, with an additional five minute incubation, water samples at temperatures down to 15°C (59°F) may be used. 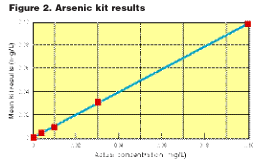 trained/untrained operators, are shown in Table 2. This data, when graph-ed, show accurate detection of the arsenic present in the sample (see Figure 2). Measurement technologies such as these will be important tools as suppliers move toward compliance.

Conclusion
In this article, some of the regulatory background, source and removal information, and testing options for arsenic in water have been reviewed. This issue will always be with us. The question is how to manage it so that the public health, and the economic health of the water suppliers, are protected.

About the author
Howard Ray is manager of research and development for Industrial Test Systems Inc., of Rock Hill, S.C. Industrial Test Systems is a manufacturer of water quality test strips, and has a patent-pending arsenic test kit that requires only 10-to-12 minutes per determination. He can be reached at (803) 329-9712, email: howardray@cetlink.net or website: www.sensafe.com