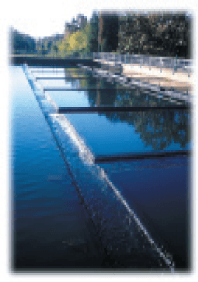 Summary: With the U.S. economy facing a recession and terrorist attacks fresh in our minds, the residential water treatment industry is being challenged more than ever. With the help of consumer awareness, though, the industry will need to become united to survive.

Economic uncertainties, including effects of the terrorist attacks of last year, put many market participants in the residential water market, ranging from the manufacturers to the dealers, in a financially tight spot. The same is true for end-users, with widespread layoffs prompting many to curtail their spending. This provides for a very challenging environment to grow as a business. To make matters worse, the industry participants have to face the problems caused by market fragmentation.

Nevertheless, the outlook for the U.S. residential water treatment markets is good. Consumer awareness about water quality issues, for example, is as high as it has ever been, and the wide variety of products ensure that most end-users will find one that fits their specific needs. Last year, the U.S. market for residential water treatment equipment reached estimated revenues of $900 million, while growing at approximately six percent. This figure—assessed at the manufacturer level—includes point-of-use, point-of-entry (POU/POE), as well as pour-through filter pitchers.

Economy
The latest U.S. economic downturn requires market participants to take a close look at their business and finances since, without careful financial planning, companies are unlikely to survive the slump. Even though the U.S. economy was officially declared in recession in the last quarter of 2001, signs of the slowdown were evident throughout the year, as companies put various cost-saving measures into effect, such as reduced work hours, forced vacations and even layoffs.

While the water treatment industry at large hasn’t yet experienced the full force of these dire effects, they’re looming just beyond the horizon. As consumers continue to tighten their budgets, they’re likely to postpone or even cancel home remodeling or other household projects. Low interest rates are encouraging some to press ahead with their projects, but others with jobs in cyclically sensitive industries remain cautious. This in turn means that these homeowners are less likely to install new water treatment equipment.

The trend can also be seen in the number of new housing units being started, where new water treatment systems are more likely to be installed. 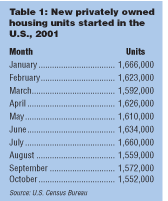 Table 1 shows growth in new housing starts has decreased over the course of 2001, with October’s numbers 6.8 percent below those of January’s. November’s numbers showed a slight uptick based on the Federal Reserve lowering interest rates in an effort to deal with the brief financial free-fall on Wall Street after the terrorist attacks.

As for those that are current end-users of some kind of residential water treatment equipment, they too will likely reduce their spending as they hold off on their purchases to replace aging systems. As the motto goes: If it ain’t broke, don’t fix it.

Awareness
The horrific events of Sept. 11 had an extensive effect on the residential water market as well. With the whole country on high alert, alternative targets for possible future terrorist attacks on America are found in places never before imagined. The list of potential sites in danger of an attack include the water resources and infrastructures, e.g., water reservoirs, treatment plants, and even distribution networks.

While such an attack is unlikely to threaten a whole treatment system due to the sheer volume of water, smaller and more targeted attacks aren’t entirely out of the question. As a result, operators and other personnel in charge of protecting the water supply quickly began to rework their emergency plans. They also increased security and protection measures at their water plants.

On a very important side note, the Water Quality Association (WQA), which represents the POU/POE market, has repeatedly discouraged its members from using these events as a tool to enhance sales. The WQA has made it clear that currently there’s no certified water treatment equipment that is adequate to protect against potential biological or chemical attacks on the water supply. While some technologies such as reverse osmosis (RO) are technically able to remove the majority of harmful agents, systems have never been tested on water tainted with anthrax, for example.

However significant or realistic such an attack might be, it has raised many questions among water professionals as well as end-users. This sudden increase in awareness of the dangers of terror attacks on the water supply came in addition to an increase in general awareness of water quality issues and the limitations of municipal water treatment. This general awareness has been steadily increasing over the years, as consumers were increasingly exposed to news stories about water quality issues as well as federally mandated report cards from their water districts. In addition, consumers nowadays are exposed more often to various advertisements, both in the media as well as in-store displays. This reinforces the idea that there’s an actual need to treat the incoming water before it’s consumed.

Market fragmentation
The U.S. residential water treatment market is very fragmented. There are well over 60 major manufacturers active in the market and this number doesn’t account for the numerous small participants that operate only on a local scale.

With this spread out field of competitors comes a multitude of available products that will seriously confuse any new and potential customer of residential water treatment equipment. First, there’s the decision on whether to treat the water at the point-of-entry or point-of-use, followed by which type of equipment should be used given the quality of the incoming water. Often, multiple technologies might address many of the same water problems—a countertop distiller, undersink RO unit or POE water softener.

Therefore, it’s important for the manufacturer and their dealers to work together to make certain the right equipment is sold and installed appropriately to meet a customer’s needs. This way, the company will ensure end-users will be happy with the purchased products, which in turn will increase the likelihood of them returning in the future.

Another method to gain new business and retain current customers is value-added services. These services are important assets for dealers and manufacturers, especially in this market where after-sales services can sometimes be the most important factor in the decision-making process. In the water softener market, for example, service contracts are often offered through the dealers. These contracts, which can include scheduled maintenance of the unit, on-call repair service, as well as salt deliveries, reduce the hassles for homeowners.

The fragmented nature of the market provides companies with a unique challenge on how to establish their brand names. This is especially true in the case of established products, e.g., water softeners or sediment filters, where the various units are very similar to each other. In fact, in some cases the equipment sold differs only on the label since manufacturers use the same pre-manufactured components readily available on the market.

On the forefront
It’s here, where the bigger companies have a chance to stand out as they have the necessary resources to establish their brands. Their own research and development departments can produce most, if not all, of the components. This not only provides more control over quality, but also establishes unique parts and systems. Large companies such as Culligan, EcoWater and RainSoft, have a long history in various aspects of the water business, and are able to use their reputations in the industry to establish their brands.

On the other hand, other companies such as PUR and Brita are relative newcomers to the industry; however, the companies and their quality products have, in a very short time, managed to establish themselves as forces in the market. Through the deep marketing budgets from their respective parent companies, P&G and Clorox were able to create new markets for pitchers and faucet mount filters through innovative advertisement campaigns and in-store displays, respectively.

Conclusion
The uncertain economic outlook, increased customer awareness, and market fragmentation are just a few issues facing the residential water treatment market. There are countless more, including price sensitivity of the end-users and international competition. Nevertheless, all market participants face the same challenges and issues. It lies with each company’s management on how to best address them and come out stronger in the end.

In order for the residential water treatment market to reach its fullest potential, all market participants—including not only the manufacturers, dealers, service companies and resellers—need to work together. Their combined collaboration will ensure that the industry as a whole will advance strongly and confidently into the future despite economic bumps and sputters on the road ahead.

About the author
Matthias Kubr is an industry analyst in the environmental group at Frost & Sullivan, of New York. For more information on this article or any other environmental or water related topic, contact Cynthia Cabral, media relations executive/industrial with Frost & Sullivan at (210) 247-2440, (210) 348-1003, email: ccabral@frost.com or website: www.frost.com