Summary: The Stage 2 D/DBP Rule now isn’t expected to lower the bromate MCL to 5 µg/L as was thought might occur as late as last fall. This is critical since 50 percent of large water treatment plants employing ozone wouldn’t have met the lower level. As such, ozone—which helps reduce other DBPs—is kept as a disinfection option in water treatment professionals’ toolkits, particularly for small systems now required to meet this and other government regulations previously applied to larger systems only.

This year marks the 27th anniversary of enactment of the Safe Drinking Water Act (SDWA). The SDWA and subsequent amendments—in 1986 and 1996—had a significant impact on public health both in the United States and worldwide. The original SDWA charged the U.S. Environmental Protection Agency (USEPA) to develop and promulgate a number of regulatory initiatives. Subsequent SDWA amendments have carried additional regulatory mandates to the USEPA, many of which encourage the use of ozone. The National Primary Drinking Water Rules (NPDWRs) and establishment of maximum contaminant level (MCL) and treatment technique (TT) requirements for specific substances in drinking water have also driven a revolution in treatment technology development, application and analysis.

No sooner had these regulations been announced and the USEPA and Reg-Neg Stakeholders (i.e., those involved in regulation negotiations) started discussions for the Stage 2 D/DBP Rule and Long Term 2 Enhanced Surface Water Treatment Rule (LT2ESWTR). This article focuses on the anticipated position USEPA will take in the Stage 2 D/DBP rule and the impact on ozone as a treatment technology for inclusion in the industry toolkit.

A look back
One of the major regulations that resulted from the original SDWA, in regard to ozone, was the so-called “THM Regulation,” promulgated in 1979. This regulation requires large utilities to meet an MCL of 0.010 milligrams per liter (mg/L)—100 micrograms per liter (µg/L)—for total trihalomethanes (chloroform, chlorodibromomethane, bromodichloromethane and bromoform).2

Finished water surveys at 80 U.S. water utilities were done prior to promulgating the THM Regulation in 1979. Only two of the plants surveyed used ozone as part of the treatment process. The National Organics Reconnaissance Survey (NORS) showed THM levels found at the two ozone plants were the lowest of those surveyed. These results, as expected, were of great interest to the USEPA.

The resultant Surface Water Treatment Rule (SWTR)6 required all systems treating surface waters or groundwater under direct influence of surface water serving greater than 10,000 people to demonstrate an ability to attain primary disinfection—meaning in the treatment plant—of these new microorganisms. Coincidentally, the term secondary disinfection was introduced, which applied to treated waters in distribution systems.

Working the equation
The USEPA developed the “CT” concept, which is the arithmetic product of the residual concentration (C, in mg/L) of a disinfectant multiplied by the time (T, in minutes) that the disinfectant is in contact with the water. As long as the product of C×T equals or exceeds a specific number set by the agency for Giardia cysts, the inactivation of a certain percentage of these microorganisms, which might be present in the waters being disinfected, would be ensured (see Table 1). 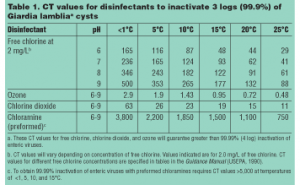 Each microorganism specified in the SWTR and its Guidance Manual7 has a specific set of CT values, which are also a function of pH (particularly for chlorine) and temperature. The lower the required CT value, the more effective is the specific disinfectant, meaning that a specific level of microorganism inactivation can be guaranteed with lower concentrations and/or shorter contact times for the more effective disinfectants

Use of ozone, having the lowest CT values for inactivating Giardia cysts and enteric viruses, gained considerable encouragement as a result of promulgation in 1991 of the SWTR.

At the same time, the USEPA warned utilities that a D/DBP Rule was being developed. The D/DBP Rule would potentially impact utilities that might seek to attain higher CT values required for inactivating Giardia cysts and viruses by simply adding additional chlorine and/or additional chlorine contact time. This new rule would also address emerging concerns such as haloacetic acids and the bromate ion.

Dangerous presence
During this period of rapid regulatory change, Cryptosporidium parvum raised its ugly head as a potentially more pathogenic protozoa with several high visibility outbreaks. This parasitic cyst is a challenge for treatment systems because it’s difficult to remove by filtration (small size, ~5 µm) and is virtually resistant to chlorine and chloramine chemical disinfectants. At the time, only chlorine dioxide and ozone had been proven to be effective at individual chemical inactivation of C. parvum.

Ozone’s effectiveness on G. lamblia and C. parvum didn’t shield it from regulatory scrutiny. It was discovered that ozone has a high potential for bromate ion formation when employed at the significantly higher CT levels to inactivate C. parvum in drinking waters containing bromide ion. And test data is pointing to a CT for C. parvum ozone inactivation that’s at least three times that for Giardia.

The USEPA recognized it couldn’t risk promulgating a D/DBP Rule that might cause some utilities to compromise on disinfection in order to ensure meeting new by-product MCLs. Therefore, both the D/DBP Rule and Interim Enhanced Surface Water Treatment Rule (IESWTR)—a revised microbial rule addressing, among other items, control of C. parvum—went into effect on Feb. 16, 1999. 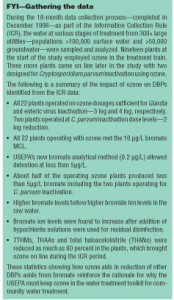 Impact on small systems
The 1996 SDWA Reauthorization directed the USEPA to develop regulations that apply to needs of small communities as well as large urban populations. Congress identified that most small municipal systems treating less than a million gallons per day (3.8 megaliter/day)— plants serving less than 10,000 people—have particular challenges due to their size and technical and financial abilities that require special consideration.

The USEPA further subcategorized water plants into those serving 25-to-500, 501-to-3,300 and 3,301-to-10,000 people to better define financial operation and maintenance capabilities. It’s also important to recognize the USEPA regulates water systems down to those serving 25 or more people, or systems with 15 or more service connections.

Individual homes, or clusters of a few homes serving fewer people or with fewer service connections, aren’t regulated by the USEPA but may be regulated by individual states. Washington, for example, considers any installation of two or more homes (except for some farms) taking water from the same source to be a public water purveyor and subject to regulation. In addition, transient facilities—such as bed-and-breakfast lodgings, rural motels, mobile home parks, campgrounds and parks—are regulated in the same manner as larger community systems, even if the operation involves only one building.

Long live the rules
While small systems were included under the broad reach of the SDWA, only large systems providing water to greater than 10,000 people were included under the 1979 THM regulation. It wasn’t until promulgation of the D/DBP Rule10 that most small systems had to pay attention to THMs, which larger water systems were required to comply with since 1982.

In the Stage 1 D/DBP Rule, the USEPA lowered the TTHM standard to 80 µg/L and added total haloacetic acids (THAA)—60 µg/L; bromate—10µg/L, and chlorite ion—1 mg/L. These DBPs are now included with specific microorganisms to the lists of substances to be regulated for small systems. Cryptosporidium is included for small systems with the promulgation of the LT1ESWTR.

The USEPA estimates that 140 million people—about half the country’s population—will have increased protection under the D/DBP Rule. With its promulgation, the agency estimated that as many as 3,615 small surface water systems and 8,324 small groundwater systems would be affected. It also identified ozone as among potential technology to augment treatment.

The D/DBP Rule is rolling out in two stages. In both stages, MCLs are to be set for the four total trihalomethanes (TTHMs), six haloacetic acids (THAAs), bromate and chlorite ion (a by-product of chlorine dioxide use). In addition, maximum residual disinfection levels (MRDLs) for chlorine (4 mg/L), chlorine dioxide (0.8 mg/L) and chloramine (4 mg/L) are to be established (see the Water Quality Association preview article, “Another Spring Break in Florida”—WC&P, February 2001—for details on the chlorine MRDL debate.) There will be no MRDL for ozone, because it won’t be present in finished drinking water leaving the treatment plant due to its short half-life.

Entering the second stage
Stage 2 MCLs are currently under negotiation during a Reg-Neg 2 process, which began in December 1998 and is scheduled for promulgation in May 2002. The Reg-Neg process is dependent on data collected under the Information Collection Rule (ICR) and ongoing public and private sector health effects research (see FYI). Based on initial USEPA comments, it was thought the agency would cut the DBP levels in half for Stage 2 of the rule.

However, data gathered and analyzed under the ICR along with health effects research pointed to potential problems with further escalating MCL reduction for DBPs. It appears several MCLs for all water treatment systems for the DBPs listed in the D/DBP Rule will remain unchanged (see Table 2).

The USEPA is required by law to reevaluate its standards every six years. Therefore, we can expect to see continuing activities to evaluate DBP health effects in coming years.

Conclusion
As always, the USEPA must balance today’s (microbial) and tomorrow’s (DBP) risks with the public health, not to mention cost of treatment. Since ozone is such an efficient tool for pathogen inactivation, the agency must be certain before lowering the bromate MCL and removing ozone from many public water providers’ “tool chests.”

For this reason, it doesn’t appear the USEPA will drop the bromate MCL to 5 µg/L in Stage 2 of the D/DBP Rule. The next six years will focus on epidemiological and risk assessment research to assure future regulations are protective of combined short and long term public health with respect to microbial and DBPs.

Treatment options—including pH adjustment, ammonia addition and multiple addition points—have shown the ability to reduce bromate formation during ozone treatment. These and other options will be evaluated and processes refined. Finally, under new USEPA rules, small water systems providing potable water to populations below 10,000 people are now required to meet all microbial and DBP standards.