The ANSI/NSF drinking water treatment unit (DWTU) standards are living documents that change as market and certification needs mature and develop. NSF International has published four standards that have had significant revisions to address changes in regulatory requirements, improvements in test methods and clearer literature requirements. Some of the changes are common throughout the standards, but each standard has changes unique to the products they cover.

Conditions on conditioners
For instance, the ANSI/NSF Standard 44 for residential cation exchange water softeners has had two major changes to make it much more useful and applicable to the water softener industry. The performance requirements and test methods have been harmonized completely with the Water Quality Association’s (WQA) S-100 1998 standard. The equivalence of performance requirements allows manufacturers to take advantage of the two-way data exchange between NSF and WQA under Standards S-100 and 44. Softeners tested under the WQA S-100 standard can qualify for use as data to achieve certification from NSF. This greatly reduces the financial burden of certification for those companies who have completed verification. This is extremely important since the International Association of Plumbing and Mechanical Officials (IAPMO) has voted to retain ANSI/NSF Standard 44 as the official standard recognized by the Uniform Plumbing Code (UPC) for water softeners and eliminating the WQA S-100 from their list of recognized standards.

As states have begun to require softeners to demonstrate efficient operation, the requirements under ANSI/NSF Standard 44 have changed allowing softeners to have both efficiency and non-efficiency rated salt settings. The previous version of Standard 44 required that an efficiency rated softener couldn’t have salt settings above the maximum that was qualified as efficient. That requirement has been removed from the standard, and improved customer information has been included. The required customer information includes that, when an efficiency rating was claimed, the salt setting, resultant capacity and standard are stated. When a softener capacity is claimed, the salt setting required for that capacity is also stated. The intent of the DWTU Joint Committee was to minimize confusion and educate consumers so they could operate a softener at the efficiency setting desired.

Aesthetics, health and RO
Several changes are common among the newly published ANSI/NSF Standard 42—aesthetic effects-2000a, Standard 53—health effects-2000a, and Standard 58—reverse osmosis systems-2000a. Several of these changes include improving the laboratory-to-laboratory consistency of testing so data generated in one laboratory will match better with data generated in another. This is an ongoing effort by the NSF Standards department to better define testing to maximize the reproducibility of testing.

Each of the standards has also changed the requirements of the Performance Data Sheet (PDS). The PDS is designed to inform the purchaser of the details of certification with information on testing and use limitations. The previous versions of the standards required the PDS to contain a summary of test results. This caused problems when products were re-tested and slight changes in reduction percentages occurred, so system manufacturers had to take the costly step of printing new literature. The 2000a versions of the standards require the PDS to contain the minimum requirements of the standard and, if a manufacturer wishes, they may include the actual data and percent reductions obtained in testing.

Chloramines
The 2000a revision of Standard 42-aesthetic effects includes chloramine reduction with an option to use the data from the chloramine test to qualify a chlorine reduction test. The chloramine test requires a system to reduce an influent of 3 milligrams per liter (mg/L) monochloramine to less than 0.5 mg/L throughout the system’s life. Several manufacturers have already taken advantage of this claim and have certified systems on the market. 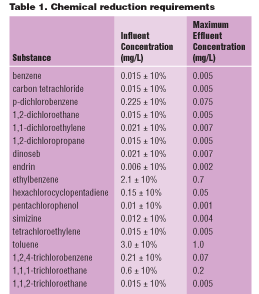 Changes in ANSI/NSF Standard 53-health effects are centered on updates in Table 1 for chemical reduction requirements.

Additions—Seventeen substances have been added to this table to expand the number of possible claims for chemical reduction to 50. These substances and their test parameters are listed in Table 1. Many of these substances were available as claims under the volatile organic compound (VOC) surrogate test program that qualifies 47 substances as a group. This inclusion here allows these substances to be claimed individually. 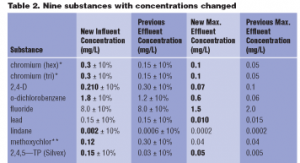 Re-testing—Three substances that will require re-testing of all certified claims are o-dichlorobenzene, lindane and 2,4,5-TP (Silvex). The changes that occurred in these substances cannot be qualified by testing based on previous requirements. Several of the substances had changes that could be qualified by previous testing if test results don’t exceed the new, lower maximum effluent values. These substances include 2,4-D, fluoride, lead and methoxychlor. The changes to chromium will not require re-testing since all certified customers prior to this standard’s version had to claim both types of chromium and were tested in combination.

Conclusion
All of these standards had significant changes that will improve their application to the industry and regulators. Further updates and changes in the works include arsenic, personal water bottles, ceramic filters, test reproducibility improvements, absolute particle reduction, filtration capacity, extraction test harmonization with Standard 61 and reverse osmosis data transfers. New standards that are being developed include the massive microbiological purifier standard, ozone treatment systems and shower filters. Standard 62-distillation systems is just completing a major revision and will be going to ballot early this year.

About the author
Rob Herman is technical manager of the NSF International’s Drinking Water Treatment Unit program and has been with NSF since 1985. He holds a bachelor’s degree in chemistry from Lawrence Technological University in Southfield, Mich., and is currently in the environmental sciences graduate program at the University of Michigan. NSF has administered the standard development process and tested against ANSI/NSF Standard 58 since its inception. Herman can be reached at (734) 769-5349, (734) 769-0109 (fax) or herman@nsf.org.